Welcome to Kristen Flood, a YA science fiction author and poet. At twenty-two, Kristen published her first book, The Museum: A Collection of Dark Poetry. Now twenty-three, she has released her second book, Seeking Incandescence. Kristen lives in Missouri with her husband and son. When she’s not writing or chasing her toddler, she spends her time cramming for tests and turning in last-minute assignments at the University of Missouri St. Louis. Kristen plans to release two books in the coming year but until then, she is just trying to get through finals.
I'm offering the digital copy of my book, Seeking Incandescence, for free on my website kristenfloodbooks.com. Readers can also find my books on Amazon.

The Writers’ Lens is about "Bringing fiction into focus." What brings your writing into focus-- the characters, the stories, the love of words? The tone of my characters brings their story into focus. I write on a stream of consciousness as the characters think, act, and develop. The tone they convey through their thoughts and actions is brought on by their very distinct personalities. This particularly can be seen through the characters' motivation. My character Pepper has this deep anger and fear of what the people in power of her world have done. She uses her illegal need for creativity to cope and her intelligence to stay afloat in the dangerous situation she finds herself in. Inno has trained her entire life to become this person her Mother has wanted her to be. But when she enters the real world, she finds herself struggling with her identity. That theme of identity is a big focus within this story. What makes us who we are? Mint, my third main character, is determined to succeed in this oppressive world but finds his natural human emotions to plague him with guilt. These character concepts bring a strong and defined tone, which brings into focus the power of standing up for what you believe in.

What makes your book/characters unique? I think what makes my characters unique is the power of the parallels in their relationships. They are all so completely different as people, and they pull from their own unique strengths. Pepper finds strength in her language and creativity. She is constantly on the defense and uses her language as kind of chess match between characters. For her, winning the chess game is the only way to survive. Inno wants to understand this world she has been asked to save. She is struggling with viewing people as humans or collateral, and you can see this in the way she interacts with her friends. The language I use around Inno is sometimes set up in this poetic structure as the readers get a chance to see her thoughts. Mint finds Inno's methods to be reckless and their constant clashing is what makes their relationship so strong. Because every time she is able to find a unique way to do something he finds his own working understanding of the world to break apart.

Is there a different genre or type of book you’d love to try to write? I never want to be confined to just one genre. My current books are YA Dystopian science fiction, and I love their world. But I have a deep love for fantasy, and I want my writing to show that in other works. Currently, I am working on an adult romantic fantasy set to come out in April. This fractured fairy-tale is just another way I want to express my creativity. But my first love will always YA and, with that in mind, I plan to release at least one YA book a year. So in August the sequel to my SI series, Crowing Iridescence, will come out.

What are your top three reasons for writing? You know, I started writing because I couldn't focus. I had the Cinderella-story childhood, complete with the evil stepmom and a lot of chores. So during the tedious chores, I would space out and dream of these magical and amazing worlds. This would, in turn, get me into a lot of trouble from my stepmom, which always ended with upsetting punishments. So I decided to write the stories away so that I could get them out of my head. And these ideas left my head and found a new place in my heart as a writer. My stepmom and dad divorced a few years later, but my stories continued to flow because I had become a writer. So I write because the worlds and people I see are more extraordinary than the life I had once lived. I write because it brings me comfort. But most importantly, I write because I am crazy, and it's the only way to free myself from the distraction.

If you could meet one of your characters, who would it be and where would you meet? I would love to meet Pepper. In the original story concept, she was a minor character who only showed up three times in the book. And even in those small moments, she made an impact on me. So I started thinking about her more, and I realized her part was so much bigger than I thought. As I started writing her, I began to fall for her words and her ideas. If I could meet Pepper, I just know I'd find her at the library reading a book about something wonderful. 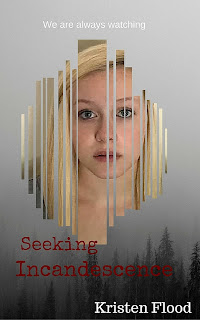 SEEKING INCANDESCENCE -- Inno shouldn’t exist. But she does. She is very real. Born illegally outside of the breeding facilities, she has been raised to believe that it is her duty to infiltrate Ares Academy and take down the government. But can she fit in with the obedient masses of the military? Pepper should be dead. She should have had her memories wiped and been placed on the streets to die. But she was immune. She has spent her life undergoing experiment after experiment and now has been charged with one task. But can she be trusted to spy for her captors? Mint is a military officer. The Seers have deemed him worthy of joining Ares Academy. There he will be molded into the perfect solider, the unshakable image of obedience, efficiency, and apathy. But what if there was another way? Is standing up worth standing out?