Workshop Aug. 1: How to write about encounters with the extraordinary 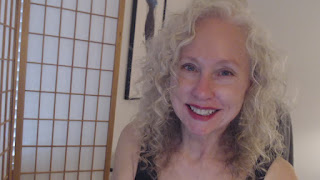 If you’ve been itching to write about a fictional character who has an encounter with something beyond the ordinary such as angels, extraterrestrials, UFOs, or ghosts, or if you’ve had an otherworldly experience you’d like to share, now is a great time to do so, said author Karen Cavalli.

At an online workshop from 10 a.m. to noon, Aug. 1, she will offer some history on writing about these encounters and key decision points during the writing process. For the Zoom address, go to the St. Louis Writers Guild’s Virtual Events page (www.stlwritersguild.org/virtual-events), or click here:

“The taboo against speaking openly about one-on-one encounters with beings and phenomena outside daily reality is loosening its hold, along with the attendant fear of ridicule,” she said. “It is possible to write about these kinds of encounters, whether they are yours or a fictional character’s, in such a way that transports both you and your readers.”

Karen will offer specific writing exercises, a bibliography, and a matrix of the most common encounter types and responses that apply to both fiction and nonfiction. Her talk will cover:
• key differences between portrayals of encounters with the extraordinary vs. the paranormal in contemporary books, video and film
• personal risks when writing about encounters with the extraordinary
• that moment in history when the course was set
• how consciousness research and quantum mechanics fit into writing about this topic
• decision points during the writing and publishing process
• key elements to include in your writing for success
• gifts that await

Karen Cavalli has been exploring and publishing about encounters with anomalous beings and events since 2014. Her most recent book is Undercover Goddess, book one in the trilogy No Boundaries, a paranormal romance for adults. Her work has won awards including Outstanding Secondary Science Book. She has an MFA in Creative Writing from the University of Alabama where she studied with Margaret Atwood. Karen can be contacted at kcgoodguide@gmail.com and at Contact Karen Cavalli

Learn more about the St. Louis Writers Guild at www.stlwritersguild.org

Searching for your next favorite story? Look no further!

I've teamed up with 18 other bestselling authors to offer you a selection of riveting new books for free, including my just-released young adult science fiction novel, Moonblood.

Click here before July 21 to take advantage of this offer!

"In a dystopian future mired in traditions whose origins have been lost, can one woman's search for truth bring answers for her and for all of humanity? ... Moonblood is an imaginative story with complex characters set in a future landscape that is all too easy to extrapolate from today's world. It pulls you and will not let go."
--Al Gritten, Goodreads review

AND check out Brad's "Three Thoughts About Dystopia" to put it all in perspective! 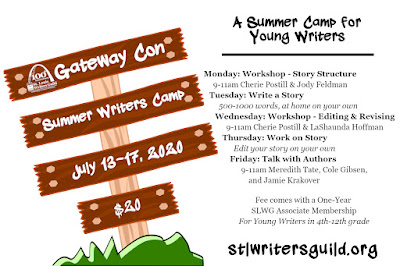 Six authors will share their expertise from 9 to 11 a.m. in workshops on Monday and Wednesday and a panel discussion on Friday. On Tuesday and Thursday, young writers will work independently on their own stories. More information is available on the Summer Writers Camp page.

St. Louis Writers Guild has aided writers for a century, and the Gateway Con Summer Writers Camp continues that tradition. Participating authors are:

Jody Feldman – Her middle-grade novels, The Seventh Level and The Gollywhopper Games series (all from Greenwillow/HarperCollins), have won a number of honors and have appeared on 26 state reading lists. Twitter & Instagram @jodyfeldman

Cole Gibsen – Because of the reprieve library books gave her as a homeless teenager, Cole vowed to become a writer so she could provide the same escape to readers who needed a break the reality of their own lives. Her titles include Risen, Seared on My Soul, Life Unaware and Written on My Heart. Twitter at www.twitter.com/colegibsen | Facebook at www.facebook.com/colegibsen

LaShaunda Hoffman – She turned her love for books into an award-winning online magazine for readers and writers of multi-cultural literature, Shades Of Romance – SORMAG. Her mission in life is to help promote writers by introducing them to readers. LaShaunda is currently working on a Christian romance and is on the hunt for a literary agent.

Meredith Tate – A New Hampshire girl at heart and a former Zurich expat, Meredith now lives in Houston and spends her days traveling the world and writing stories about characters much braver than she is. Her books include The Last Confession of Autumn Casterly, The Red Labyrinth, Freedom Trials, Missing Pieces, and a currently untitled romcom coming from Penguin Teen in summer 2021.

C.L. Postill – Her debut novel, CORY SUMMERS-A New Beginning, was born out of a story she has been creating and telling her boys and their friends before bedtime, around campfires, and at sleep-over parties for over 25 years. www.clpostill.com | @postillc on Twitter.