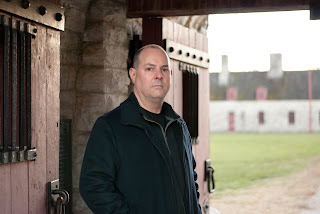 Bestselling author Van Allen Plexico will discuss why “Pulp Fiction Isn’t Just a Tarantino Movie” from 10 a.m. to noon, Jan. 7, at a workshop hosted by the St. Louis Writers Guild. Held at a new location -- in the Dogwood Room at The Lodge Des Peres, 1050 Des Peres Rd, St. Louis, MO 63131 -- the workshop is free to Guild members, $5 for nonmembers.

Plexico won the 2015 Pulp Factory Awards for both Novel of the Year and Anthology of the Year. He is the Amazon bestselling author of more than a dozen novels and numerous short stories, novellas, nonfiction books, columns and essays from a variety of publishers. In addition to his ongoing SENTINELS illustrated superhero novel series and his SHATTERING space opera series, he has written two bestselling nonfiction books about Marvel’s Avengers, as well as being selected to write the year-by-year history of the Avengers for Upper Deck’s commemorative trading card set.

He has written the adventures of many classic pulp characters for various publishers, including Sherlock Holmes, the Griffon, Hawk, Mars McCoy, Gideon Cain and Lance Star. John Blackthorn, a pulp character he created in 2011, won the New Pulp Award for Best New Character that year. His biweekly interview program, the White Rocket Podcast, was a finalist in the 2015 Parsec Awards. An Associate Professor at Southwestern Illinois College, he has appeared as a guest, speaker, presenter and event host at dozens of conventions and literary festivals across the U.S.


Please note the new location for the Guild’s monthly workshops. For a map and directions to The Lodge Des Peres, as well as additional information about the St. Louis Writers Guild, go www.stlwritersguild.org.