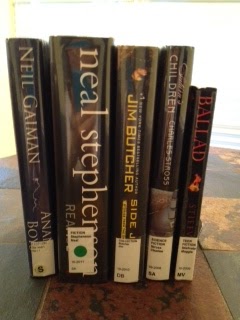 As 2011 comes to a close, it strikes me that finding good books is like so many things—word of mouth rules! Thanks to recommendations from others, this year I’ve tried a lot of new writers. It’s been so much fun that I thought I’d share 12 of my favorite “new-to-me” authors in case you’re starting or updating your reading list. And I'm sending you my holiday wishes for many happy hours of reading in 2012!
Maggie Stiefvater—I raced through both her series (Wolves of Mercy Falls and A Gathering of Fairies) after my friend Cole offered one of Maggie’s books on her blog in a giveaway.
Cindy Sample—I met Cindy while she was in town for Bouchercon and picked up her latest book, DYING FOR DANCE. It was so much fun, I couldn’t wait to get her first book, too (which you could win by leaving a comment today!)
Fran Friel—I had the great pleasure of attending a retreat with Fran in Virginia last January. After reading her MAMA’S BOY collection, it’s easy to see why she was twice a Bram Stoker finalist.
Veronica Roth—DIVERGENT was one of the excellent young adult dystopian books Cole told me about this year. I’ve long been intrigued by Jungian personality types and loved what Roth did with the factions.
Neil Gaiman—Goodreads turned me on to Gaiman’s NEVERWHERE, a romp through London’s underworld.
Andrew Smith--THE MARBURY LENS, another Goodreads referral, may be the most unusual story I read in 2011. It’s hard to even describe—maybe a violent alternate reality adventure story geared toward older boy readers?
Neal Stephenson—CRYPTONOMICON sat on my shelf for years after my daughter gave it to me, but since November 2010, I’ve read four of his lengthy tomes. ANATHEM was my favorite. Much like Kim Stanley Robinson, Stephenson bundles theology, science, mythology and history and makes it fun to read 1,000 pages. Now that’s talent!
Charles Stross—Also on my daughter’s recommendation, I entered Stross’ strange world of The Laundry series, where magic and technology meet, via THE FULLER MEMORANDUM.
Tim Powers—Okay, so he isn’t really a new-to-me author. I’ve been a huge fan of Tim’s work for more than a decade. But somehow I’d missed DECLARE until I saw it mentioned in Stross’ acknowedgements (so read DECLARE first).
Jim Butcher—Harry Dresden magically transported me away from some tough situations in my “real” life this year. Thank you, Harry...and Jim, too.
Cole Gibsen—Cole’s two young adult fantasy novels—KATANA and BREATHLESS—will be released in March 2012, but I had the pleasure of reading them as they were being written. Samurai and mermaids (respectively)--what’s not to like!
Brad R. Cook—His short-story collection FOX vs. HOUND: THE WORLD WAR II CASE FILES will be available this spring, but in 2011 I enjoyed his other works-in-progess: a steampunk novel, THE IRON HORSEMEN, and EXCALIBUR STOLEN, a middle-grade contemporary Arthurian adventure.