Get Your Very Own St. Louis Reflections! 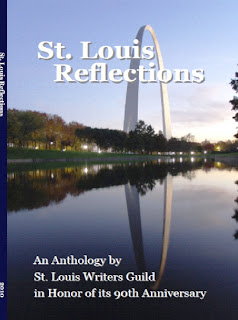 It’s Monday and here at The Writers’ Lens that means – GIVEAWAY TIME!
Today I have something very exciting. I will be giving away one copy of,

Founded in 1920, St. Louis Writers Guild continues to thrive! St. Louis is known to many as home of the Cardinals, the Blues, the Rams and the Arch, and as the birthplace of Ragtime, ice cream cones and provel cheese. It has always been a literary hotbed. To show our love for everything this city on the mighty Mississippi has given us over the last ninety years, we decided to share our reflections of our wonderful, close-knit community. We honor the culmination of the Guild's 90th Anniversary Year of Festivals with this anthology written by some of today's greatest writers. Inside you’ll find 45 poems, stories, essays, and memories. Enjoy!

St. Louis Reflections contains a list of every member in 2010.

This anthology contains 45 poems, stories, essays, and memories as well as a quick history of one of the oldest and largest literary organizations in the country.

One note about the giveaway: Due to shipping limitations, you have to live within the continental United States to win. Apologies to the international readers, we also have giveaways are fully online so anyone can win.

To enter the contest, simply leave a comment or question on The Writers Lens Blog between December 12th, and midnight December 17th, 2011. Please include your email so we can reach you if you win. The more comments you leave, the greater YOUR chance of winning the contest. The winner will be chosen after midnight on Saturday and the announcement made on Sunday, December 18th.

Want to learn more about St. Louis Writers Guild, you can find us at www.stlwritersguild.org – on Facebook – or on Twitter @stlwritersguild