Good Evening Ladies and Gentlemen. A special word to you who were arrested by your local law enforcement body for speeding home to  read this blog entry. Despite having many favors owed to me, I am deeply sorry that there is nothing I can do for you in this regards, except to recommend a few good lawyers and remind you that this is the age of the internet. The posting will be up as long as the website is up.

In light of what has happened between my last post and this posting in Connecticut, I  am going to forestall my normal macabre Hitchcock opening.

Because of opportunity, I am also going to interrupt our normal discussion on Writing Hitchcockian and discuss a movie that I recommend that you should go see. Please obey the traffic laws while you hurry to make the next showing of Hitchcock. 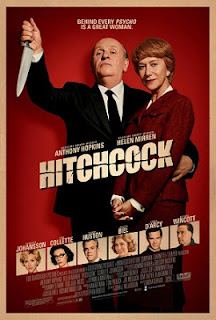 The poster art copyright is believed to belong to the distributor of the film, the publisher of the film or the graphic artist.

If you haven’t had a chance, but you are following the discussion the Writer’s Lens has been having on Alfred Hitchcock, I would recommend that you see the movie Hitchcock starring Anthony Hopkins and Hellen Mirren. There are many reviews on this movie by critics and Hitchcock fans. Some are positive and some are negative. If you want a review from a movie critic’s point of view, please see a blog or article written by a critic. As close to a movie critic’s statement that this article will come is: I saw it twice in the theater, which I rarely do to a movie any more these days, and I intend to make the movie a part of my DVD collection. The movie is being slowly released in a limited viewing—not unlike the original release of Psycho. At the end of this article, I will put a link to the movie site so that you can see where and when it may be released in your area.

What I would like to do instead is discuss in this article how the movie on Hitchcock and his making of Psycho shows the creative process of the Master of Suspense, of the doubts and obsessions that go through us writers and creative people, and the determination despite the critics and naysayers.

The movie opens and closes in a traditional “Hitchcock Presents” style. The opening shows a scene where Ed Gein, the real life inspiration behind the book and the movie Psycho, kills his brother. Ed Gein becomes a character through out the movie as an expression of Alfred Hitchcock’s darker side—or rather as we have discussed how Hitchcock used Freudian psychology in his movies and story world—his Id. We see how the “psychological character” of Ed Gein twists Hitchcock’s self doubt in his ability and in his marriage to Alma Reville—perhaps his greatest supporter in his life.

All three elements of Hitchcock’s story world creation come into play in this movie. While it is not a movie of suspense, it is a movie that shows us the:
The movie showed Hitchcock’s:

Psycho was a movie Hitchcock had to produce himself. The movie industry was not enthusiastic about it and the censors at the time threatened to stop its release. Alfred and Alma put up their mansion up for mortgage to pay for the movie to be made.

I do not want to go into everything in the movie as I have already given too many spoilers here—but not enough to ruin the movie. If you are a writer, regardless of your genre, I would say this movie needs to be on your must see list. I can promise you, if you have gone through any trials or tribulations in your writing, you will relate. You may even see the shadowed profile of Alfred Hitchcock himself on the wall in the mirror of your mind.
For how this all plays out, for how the story conflicts are resolved and how the story worlds collide—well, I am no master of suspense, but I think I will leave you stewing in your curiosity.

Thank you for reading and please visit www.davidalanlucas.com and www.thewriterslens.com. You can also follow me on twitter @Owlkenpowriter and the Writer’s Lens @TheWritersLens. Fiction is the world where the philosopher is the most free in our society to explore the human condition as he chooses.
Posted by Unknown at 6:51 PM