Welcome to Dr. Clay Alexander, whom I had the pleasure of meeting in October. I enjoyed his fast-paced novel during our tour of Japan, thanks to the wonders of ebooks that can be downloaded in foreign countries in the middle of the night!

Dr. Alexander graduated from Yale with a BA in English followed by an MD from Cornell Medical College. After five years of internship and residency at the Columbia Presbyterian Medical Center, he joined the Army and spent two years, based in Japan, caring for Vietnam War wounded. He practiced and taught in New York City for ten years as an Assistant Professor of Clinical Surgery (Columbia University) at Roosevelt Hospital. 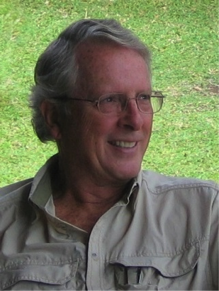 Dr. Alexander moved to Dallas, Texas, in 1977 and continued his general surgery practice. He authored numerous medical articles, appeared on local and national (CNN) TV and served actively on many hospital committees and local Boards. He was on the Quality Assurance Committee of the Travelers Insurance company in Dallas as well as the Texas State Quality Assurance committee of the Texas Medical Foundation. He wrote opinions, both for plaintiffs and defendants in malpractice suits and testified at trial.

He lives with his wife in Southern California and is finishing his third novel.

The Writers’ Lens is about "Bringing fiction into focus." What brings your writing into focus-- the characters, the stories, the love of words? I’ve been a voracious reader throughout my life and, in college, majored in English. This may sound strange for a physician, but I think the best doctors use both sides of their brain — one side for the science and the other for the caring. One doesn’t choose that major unless he loves the language and the limitless uses of its words.

The word “focus” has more than a single meaning. It can mean a concentration of energy. My books are not just exciting stories. There’s a layer underneath, a central theme that I hope stays with the reader long after the title is forgotten. In Ultimate Malpractice, it’s an underlying emphasis on domestic abuse and ethics. There is no lecturing—the lives and actions of the characters energize the theme.

The word “engrossing” is associated with focus. The characters themselves, with their strengths and weaknesses, should be so real that the stories they weave come alive. The plots keep the midnight oil burning.

There is “clarity” and “balance” in good novels; two other words used in the same context with “focus”. Good and evil — yin and yang — are obvious examples of this. A killer’s actions can be offset with a love story. A single character, going tragically downhill, can undergo an epiphany and struggle her way back — from tears to laughter— regaining her balance. I use these things to bring my writing into focus.

What inspired your latest book? My latest book should be published by February 2014. What inspired me were the “end-of-life” issues which influence the federal government’s health care plan and budget, upset physicians caring for certain patients and foment the public itself. The patients I’m concerned with are those who are terminally ill and suffering severely, but have no medical directive and are not in hospice. Doctors are then legally obligated to continue maximum treatment, including CPR, chemotherapy, dialysis, etc. etc.

How much fact is in your fiction? There is a significant amount of fact in my fiction. In Ultimate Malpractice, surgical operations are described simply and in layman’s terms. I have extensive experience (happily not with any of my own patients) in writing opinions and testifying in malpractice cases. In addition, certain unscrupulous activities by some personal injury lawyers are factually described. I have treated victims of domestic abuse.

One can also say that the highest compliment a reader can make is to recommend the book to a friend . . . but that hardly explains why. 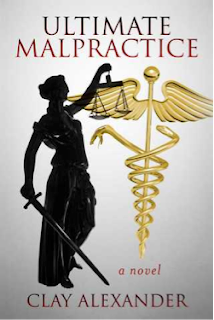 ULTIMATE MALPRACTICE--Surgeon Thomas MacAlister is on probation from the Medical Board of California for previous lapses in judgment, and is at risk of losing his medical license. It is a fateful day when he operates on Tony Hubbard for a perforated appendicitis. Hubbard is an unscrupulous personal injury lawyer who decides—when malpractice occurs—that money isn’t enough.  The lawyer has fallen in love with his law partner’s wife and decides that MacAlister has both the skill and motivation to take care of his competition. But is the lawyer himself at risk when he later threatens to file a malpractice suit?

MacAlister’s marriage to a bright successful young woman begins to disintegrate when she realizes his abuse and bizarre bedroom games are a symptom of a much deeper depravity. To what lengths will the surgeon go to keep her from revealing his secret life and what options does she have when he refuses to let her go?

Practicing excellent medicine is not only about curing disease; it’s also about understanding the patient and helping with the stress. It becomes more difficult for the physician if the patient has a serious mental illness. What happens when the situation is reversed?


This is T.W. Fendley. You can find out more about me and my books at www.twfendley.com. Thanks for reading and commenting on The Writers' Lens.