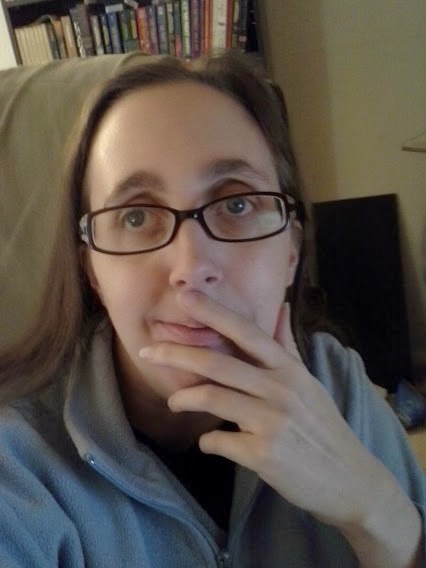 Welcome to Elizabeth Einspanier,  a writer of science fiction, fantasy, horror, and cross-genre fiction, as well as poetry of all types. Her short stories have been published in Down in the Dirt and Dark Fire Fiction, and her poetry has been published in Aphelion, Haiku Journal, and Abandoned Towers Magazine. She has been a member of the St. Louis Writer’s Guild since November 2013.

She has been writing as long as she has been able to string words together into an interesting story, so naturally by the time she enrolled in college it was clear that a BA in English was the way to go. Her inspirations are as diverse as Stephen King, Terry Pratchett, C. S. Lewis, Arthur Conan Doyle, Madeleine L’Engle, and Jonathan Coulton, and when she is not writing she works full-time at the St. Louis County Library, where she feeds her hunger for new books. Her other hobbies include playing Dungeons & Dragons and watching strange movies.

She is a native of St. Louis, but frequently visits worlds of her own creation.

What brings your writing into focus-- the characters, the stories, the love of words? Mainly I enjoy offering a different take on a genre, trope, or mythos, rather than recycling the same old things over and over again until my stuff essentially disappears into the crowd. I also like throwing unusual characters into otherwise classic stories, just to see what happens. My mind likes to look at old things in new ways, and in new combinations, and more often than not it results in something I have an awesome time writing.

What inspired Sheep's Clothing? Basically I was getting tired of all the modern vampire novels featuring decadent "beautiful elite" vampires that were all sex gods or goddesses who just happened to drink blood. My tipping point was reading Twilight, and I just ran as far as I could in the opposite direction, back to the Bram Stoker, old-school vampires. Of course, I couldn't exactly rehash Dracula either, or I'd still just be following someone else's literary path. I think the Western angle finally came in shortly after I read the comic Desperadoes and realized, hey--the Old West would be great for a supernatural tale like this. I mean, vampires in the Wild West? Native American shapeshifter myths? Why not? It kind of fell into place from there.

What do you think readers will like about your book? First, my vampires don't sparkle. If you like your vampires to be bloodthirsty, vicious predators that actually fit the horror genre, then I think you'll like Sheep's Clothing.

Second, I researched the daylights out of this thing, from the time period to the monsters. The setting itself is as period-accurate as I could get it, only with the addition of vampires and werewolves, and rather than having "everybody" know about vampires, I acknowledged that they weren't even a part of popular culture yet, since Dracula wouldn't be published for more than two decades. As for my werewolf protagonist, he's half-skinwalker on his Native American side, setting him squarely within the mythology of the American territories.

Third, both my protagonists are complex characters that you want to root for--the skeptical doctor who wants to save his town and woo his next-door neighbor, and the wandering gunslinger who wants to avenge his lost love. They're both very human--even the one who isn't.

Would you share a bit about your next project? I have several projects in progress right now, but the one I'm currently working on is a sequel to Sheep's Clothing that focuses on Wolf Cowrie. It's entitled Hungry as a Wolf and offers a different take on the flesh-eating zombie tale by taking a hard left at the Algonquian myth of the Wendigo. Wolf's going to have more difficulties finding allies in this one, because it takes place in the Black Hills in 1875, where white settlers are in the middle of a gold rush and the local Sioux (Wolf's people on his mother's side) are trying to get them off their sacred land. I'm still plowing my way through the rough draft, but I'm making fairly swift progress.

How much fact is in your fiction? Quite a lot, actually. It might seem odd considering I write speculative fiction, but most of my stories are set in a version of "our" Earth that happens to have some crazy stuff going on in it, so I like to start with a pretty stable base of familiarity. Even my supernatural elements are based on existing folklore, so even if I have this creature in a setting that doesn't have the term werewolf in the local lexicon, my readers will be able to pick out that it's still a werewolf with the serial numbers filed off.

Doc Meadows, frontier doctor working in the small town of Salvation, has always considered himself a sensible man, and has not believed in monsters for a long time. When injured half-Indian Wolf Cowrie staggers into his practice one night, however, he brings terrifying news--a vampire he hunts plans to settle in Salvation and turn it into his own private larder. Now Doc has to overcome his skepticism and fear in order to face down this new threat to his town, before Salvation becomes just another ghost town in the territories...

You can buy it at Amazon: