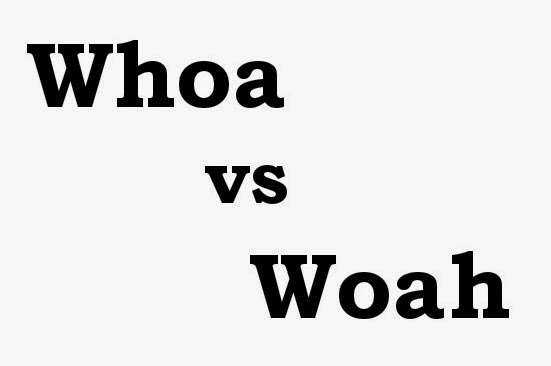 Is it Whoa, Woah, or Whoah?

They all come from Woa or Whoo.

I have to admit I was unaware of the controversy until recently when someone pointed out that I was spelling Whoa wrong. You can imagine what I said… “Whoa,” or was it Woah?

I’ll admit I’ve used Woah for years. Now before you jump down my throat, I do it because I thought it was a correct spelling. I don’t remember where I first saw Woah but I know I’ve seen it before – and I had. It is misspelled so often that it is now listed as an alternative spelling in many dictionaries. Personally, I like the look of Woah vs. Whoa. I like the H at the end. To me Whoa looks like a misspelled who. I'm not even going to touch Whoah.

I’m not entirely wrong either. Woah is an acceptable variant in some countries and is preferred in others. Britain is said to use Woah over Whoa. Woah was also used in the past over Whoa, but here in America the acceptable form of the word is Whoa. Even as I type, spell-check flags every Woah and suggests Whoa to replace it.

I never really learned how to spell the sounds, reactions, and vocalizations that we make. As a writer I mostly fall on the books I’ve read, how other authors describe something, but technically that’s how I got stuck on Woah. It’s not like any of my English teachers ever put these words on a test.

There needs to be a book that contains all these strange words – there is it’s called a dictionary plus a metric ton of grammar books – obviously I haven’t read them… yet… but maybe I should.

Does Woah really mean the same thing? Whoa is what a cowboy says to a horse, but is that the same Whoa I say in astonishment? If they’re different then shouldn’t there be a different word? These are the things that keep me up at night.

Besides, if Woah is really Wo-ah then why isn’t Whoa who-a (hoo-ah). It’s enough to make a writer go crazy, and yet, I know the grammar hounds out there have cringed through this whole article.

Can we just start using Wo? I didn’t think so.

Looks like I have hours of Find and Replace ahead.
Woe is me.

I had fun exploring Whoa.
I wrote this because of how much fun it was (read this aloud and you’ll see what I mean) but in truth write what you want and fix it in revisions.
Know any more crazy sound words? Share them in the comment section.