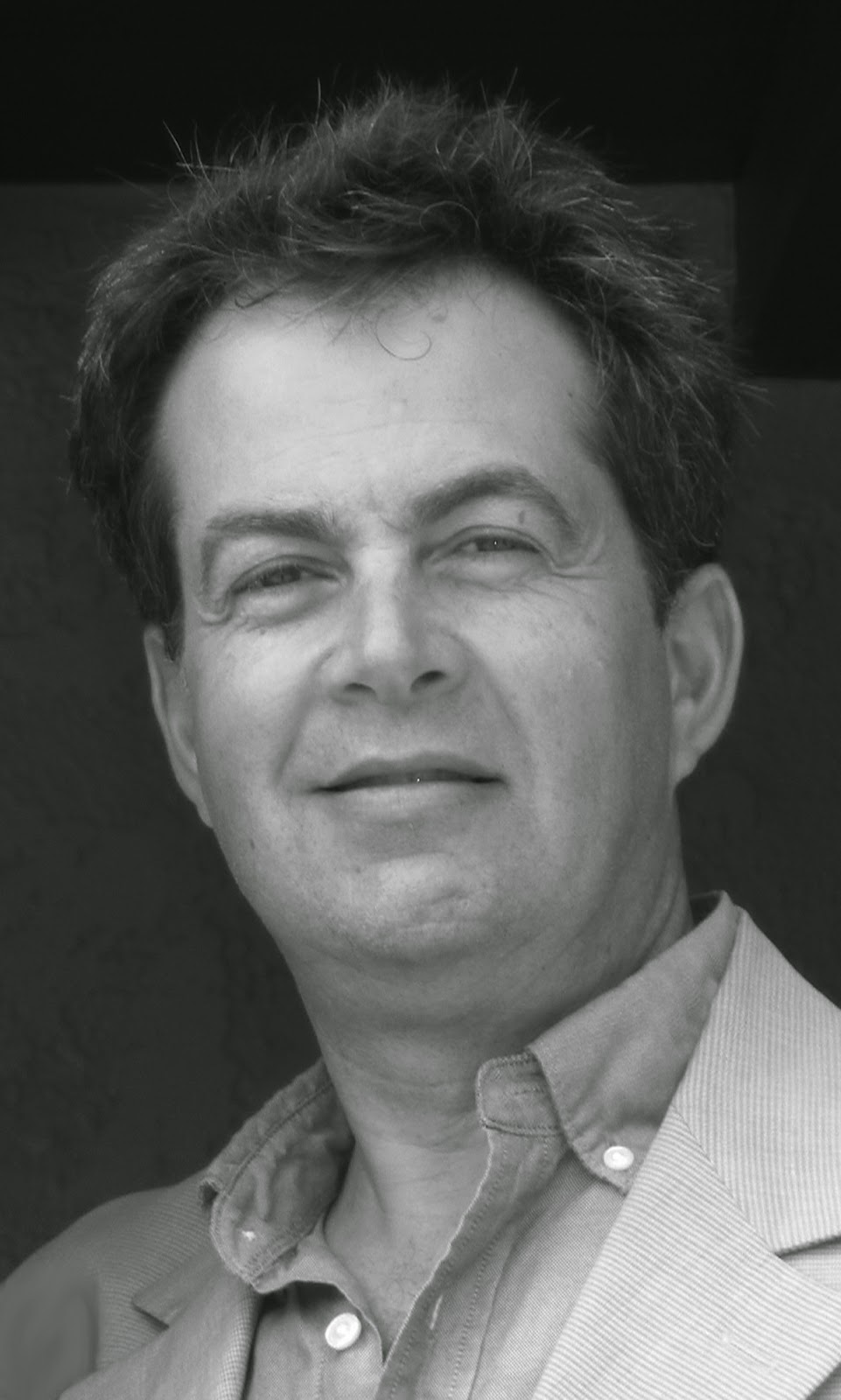 Welcome to author Mark Fine, who was born in Johannesburg, South Africa. New York, Minneapolis and Los Angeles have been home since 1979. Through global music giant PolyGram, Mark founded Hammer & Lace Records. His label had a unique mandate: to be the industry’s only imprint dedicated to highlighting specific social or health issues by creating benefit albums that promoted life-saving awareness campaigns. For a decade Fine proved adept at uniting non-profit organizations, corporate and media sponsors, and world-class musicians such as Sheryl Crow, Sting, Melissa Etheridge, Bryan Adams and Boyz ll Men in aid of breast cancer research  and wildlife conservation. For his work Fine received several awards from both the music and oncology communities. Now he lives in the South Bay—where he wrote The Zebra Affaire—with his two sons and a neighborhood dog that drops in from time to time.

What brings your writing into focus-- the characters, the stories, and the love of words? It's a real love for Historical Fiction that provides the window into the world I'm creating; and having the fictional narrative bound by actual facts and real people--and documented events and circumstances--brings an automatic focus to my writing. Historical fiction has always intrigued me; it’s a wonderful way to be entertained and at the same gain priceless knowledge such valuable insights in other societies and bygone periods.

I personally found that by reading powerful storytelling within the context of a factual background made the process of learning painless—and I devoured works by, for example, Herman Wouk, Leon Uris, Ken Follett, Colleen McCullough, Alice Walker, Irving Stone, and anything by my current favorite, Alan Furst. And let's not forget South African masters such as Wilbur Smith, Andre Brink and playwright Athol Fugard.

Some of my readers of The Zebra Affaire admitted they played a game as they read my novel; verifying the facts on Google as they progressed through the story, happily my research proved sound. But it is undeniable that the rubric of truth provides a solid foundation in my work-leaving me with the challenge of layering a fictional story, that's both emotional and compelling, over this structured historical foundation.

What inspired your latest book? Or, Why did you write The Zebra Affaire? Having the benefit of time and space, I wanted to explore the circumstances that led to my emigration—I was then in my early 20’s—from South Africa during the late 70's. What I discovered fascinated me because with distance I now found I had a better perspective of events.

This brought clarity to the confusion, corruption and callousness I saw growing up in South Africa. But along with the unfair and disparate ways in which people lived, I was also reminded of the country’s beauty; both its natural splendor—for example the thrilling wildlife, and the kindness and courage of individuals—who did take personal risks for the greater good.

The elevation of racial tensions in the United States has troubled me, and I felt a timely spotlight on the South African apartheid years could provide a cautionary tale.

Another motivation to write the book is the plight of Southern Africa today. Despite the seismic changes in South African society since its 1994 liberation, it unfortunately remains an unhappy nation. I believe there are still systemic problems that need to be addressed—specifically the corrosive role of tribalism in this multicultural society. This is an issue that continues to be sadly ignored.

Additionally, I wanted to write a love story. But it needed to be significant—far more than just a couple quibbling over “who left the toilet seat up." And through the eyes of my fictional lovers, I wanted to tell the factual story of South African life in 1976 as the backdrop to my story.  So in my mind the adversity the romantic couple faces in The Zebra Affaire,  being persecuted by their  government for being in love, is about as harsh as it gets; and so the mixed race story of Elsa and Stanwell breaks new ground for me.

What's your favorite way to interact with fans/readers? No doubt it's the Book Clubs, whether in person...wine, coffee, snacks, and an immersive three hour conversation. Or, if need be virtually through Skype and Google Hangouts. I've really come to appreciate the level of engagement enjoyed by both myself and the book club members, when they have read my novel, are beyond curious, and pepper me with relevant questions. And at times reveal a part of themselves in the two-way exchange.

For me a profound moment was discovering how uniquely my words resonated with some readers based on their life experiences. My book is about racism in 1976 apartheid South Africa; but hearing from one reader how my African story surfaced suppressed memories from her childhood in the American South, specifically Georgia, was quite a revelation.
Also, and I'm not sure other author's see it this way, but I'm humbled by meeting one-on-one those that have taken the time to read my book. I've come to realize the price of purchasing my book is not the real cost; it is the time these men and women have taken...several hours out of their lives, to read my words...and that is truly rewarding.

So unabashedly I'm ready and willing to make myself available for book clubs (be it real or virtual) and welcome any invitation via markfine@illovobooks.com.

​What do you think readers will like about your book? First the time period: the late 70's with rich descriptions on the fashion, music, morals and history of the time.

Second an exploration of surprising human behavior in the face of brutal laws. How was it possible in a nation with such a small minority, that they controlled the large majority so cruelly, for so long? The black population seemed so accepting. It begs the questions, “Why? How was it possible?”

Three, the terrible repercussions ordinary people face when doing routine things; it should challenge the reader to consider what would he or she do if faced with similar circumstances. Especially if your elected government is behaving badly and at your core you know its edicts are morally wrong.

Four, there are fascinating "locations" in the novel, from a mile underground the earth’s surface in the dark depths of a goldmine to the thrill tracking lion, rhino and zebra on a photo-safari in the African wilds. My hope is that readers will immerse themselves in an exotic journey within the book.

Finally, as I lived in SA during this period, I believe readers will detect a certain authenticity in the narrative. This brings a sense of immediacy and first-hand knowledge to anyone reading the book.

What about your career outside writing and how did it influence your work? I was a music executive in both South Africa and the United States for four decades. This gave me the opportunity to be creative, and work with super artistic men and women throughout my work life. And as such, I learned to trust the creative process. By witnessing so many recording artists work their craft, even under the stress of release deadlines, I was innately confident and never felt creativity would desert me— even during those inevitable challenging moments during the writing process.

I also had the opportunity to launch my own record label through the PolyGram group—Hammer & Lace Records; it had a rather inventive mandate to produce benefit albums for a variety of causes, such as breast cancer awareness, the blind, at-risk children, and wildlife conservation. In the course of these projects I had the privilege of collaborating with Sheryl Crow, Sting, Bon Jovi, Boys II Men, Bryan Adams and many others

My only regret: I never once tried to write a song with any of them! I so admire the songwriter’s craft; the ability to reduce a big idea down to a pithy three minute song… Instead, I finally wrote this novel solo—by myself, and needed 85,000 plus words to tell my Zebra Affaire story.

THE ZEBRA AFFAIRE: It’s SPRING 1976. In apartheid-torn South Africa, a black man from Malawi and a white woman of Afrikaner heritage made an unlikely union that shocks the nation. No government has the right to interfere in the love between two people, but that’s not the case in apartheid South Africa. Elsa and Stanwell’s illicit romance threatens the strictly controlled racist doctrines of the regime, and orders are given to stop them. Harried by the brutal Security Branch eager to destroy them, the desperate couple fights a sometimes lonely battle against the forces of segregation and tribal mistrust.

All sides across the color-divide are represented in a great canvas embodying the South African experience; from the Anglo-Boer War at the turn of the last century to the bloody 1976 Soweto Riots, and from a mine one-mile deep beneath the City of Gold to the harsh wilds of the African bush. In this compelling and vivid story of an interracial couple’s painful journey in an unaccepting world, the guilt, cruelty, and hypocrisy of their fellow citizens are exposed; as the nation wages a deadly struggle for freedom . . . and eventual redemption in the guise of prisoner 46664, Nelson Mandela.

Find his books and more about Mark at:
Posted by T.W. Fendley at 1:00 AM