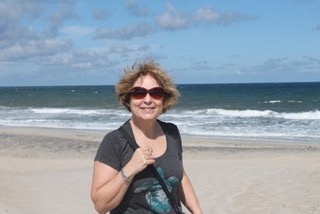 Welcome to Julie Whitley, a retired nurse who lives in Ontario with her husband and mother. Julie is the proud mother of daughter Jennifer and enthralled new grandmother of grandson, Hamish. Secrets of the Home Wood: the Sacrifice is her debut novel and represents a labour of love over twenty years in the making. Julie also loves to fill her time with painting, travelling, sailing with friends and scuba diving/snorkelling. Life is good!

1.  What brings your writing into focus-- the characters, the stories, the love of words? I have loved to write since I was nine years old and I would sit for hours in my room writing stories and illustrating them. I have to say that the love of words got me started, but it is the love of a good story and the development of characters that inspires me now. I try to appeal to all the senses as I write, without being too poetic. Learning how to tell a story effectively has been an interesting journey and my skin has become much thicker through the process. I was once asked if I ever met an adjective I didn’t like. After being taken back for a minute, I realized there was a great deal of truth in the question. Having mentors and honest beta readers has helped me cure a lot of tics, but it is an endless fight to keep from developing new ones.
2. What inspired your latest book? My latest story, The Stalker, is the sequel to my debut novel Secrets of the Home Wood: the Sacrifice. The first story was decades in development from a creative writing exercise, to a one character journey that transformed into the story of a family. After all the time it took to complete The Sacrifice, I was positive it would be a stand-alone story. In fact, even as the last chapters were being written, it suddenly hit me—hard!—that a sequel was brewing. The arrangement of characters has changed a little, but the danger and suspense and three points of view is the same. I am enjoying the further growth of the two main characters, while the feisty third has been a pleasure to get to know.
3. What do you think readers will like about your book? Readers of The Sacrifice have said that they enjoyed the intricacy of following the three journeys of the protagonists. The read was quick even though 80,000 words and each chapter ending spurred on the turn of the page. I think that readers of the Stalker will be delighted with the same format and growth in the characters as well as the excitement of the new dangers they face. What has also been most fun for me is that while originally written for a YA audience, my readers have ranged in age from 10 to 80!
4. How much fact is in your fiction? Even though my story is fantasy, I have used some names of places and people from my life: a place I once worked, my best friend, my uncle who passed away just before I introduced his character. As well, I had saved up names that I had heard over the years and thought were wonderful. The world I created was an amalgam of countries I have visited and would like to visit and historical time periods. I researched the designs of medieval castles, but the rest came from my imagination.

SECRETS OF THE HOME WOOD: For Jonathon, the Home Wood that borders his grandfather's farm has always been a source of mystery and dread. Strange half-heard rumours passed among aunts, uncles and cousins never quite add up. More than twenty years ago, his father-when he was Jonathon's age-was swallowed up by the Home Wood for more than a day and came back badly injured. That was when his grandfather forbade any family member from venturing back there. And so when, from his bedroom window one morning, Jonathon sees his father once again cross into the Home Wood, he knows something is very wrong. Deceiving his grandfather, Jonathon sets out after his father and makes his way, for the first time in his life, into the woods. What he finds there is beyond even his wildest imagination.

"Secrets of the Home Wood: the Sacrifice is a charming fantasy read with endearing characters, the well told creation of Julie Whitley, a new author to watch."
~Jordan Dane, Critically Acclaimed & Bestselling Author

Email ThisBlogThis!Share to TwitterShare to FacebookShare to Pinterest
Labels: Julie Whitley, Secrets of the Home Wood: the Sacrifice