Mantras - What would your character do? 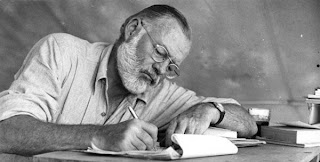 Mantras: What would your character do?
By Brad R. Cook

A little while ago, I had a new water heater installed and the plumber had the coolest mantra – “What would Elvis do?” Whenever he faced a problem, this mantra helped collect his thoughts. It got me thinking, not about WWJD or what Elvis meant to this man, but rather who spearheaded my mantra.
So, here are a few of mine,
What would Batman do?
What would George Washington do?
What would Obi-wan Kenobi do?
And my favorite,
What would Hemingway do?

As I pondered this conundrum, I realized, I didn’t like the question. If I’m stuck, the last thing my mind needs to do is answer another question. I prefer quotes, those beautiful gems of wisdom passed down by those who screwed up before us. These were my mantras. I heard the voice in back of my head call out – “Fear is the mind killer, I must not fear.” It’s from Dune, and yes, I do use the cool Kyle McLaughlin inner-monologue voice.

“Some men see things the way they are and say, “why?” I dream things that never were and say, “why not?” – Robert F. Kennedy
It’s the second half of this quote that I feel defines me as a writer.

“It matters not how straight the gate, how charged with punishments the scroll, I am the master of my fate: I am the captain of my soul.” – Ernest Hemingway
By the way, drink, fight, and write about it in the morning, that’s what Hemingway would do.

The real revelation was when I figured out the characters in my novels had certain key phrases or sayings that defined them. The odd part was that I didn’t knowingly create these mantras. It was only the character's voice being channeled through the page. In my current Steampunk adventure, Alexander, my main character, is constantly asking himself – What would the Sky Raiders do? He’s sixteen and wants to be one, he also asks himself what his father would do and then does the opposite – he never actually says the line, but I see it in all his decisions.

I started to see them everywhere. Indiana Jones famously said, “This belongs in a museum!” and you can see this motivation in all the movies – now why he decides that trinkets belong in a museum and not the cool temple he destroyed on the way out is beyond me, but that is a post for another blog.

Shakespeare is famous for them, who can’t remember Hamlet’s, “To be, or not to be, that is the question.”

I find antagonists are often defined by these mantras,
Gollum’s constant repetition of “My precious,” exposed his sole motivation.
Gordon Gekko had, “Greed is good.”
And how many times did the Red Queen scream, “Off with his/her head!”

So listen to your characters and hear their mantras. They are often easy to spot. As you read your manuscript, what phrases jump out? When your main character hits a brick wall, what is their reaction? Think about that as you write. Greater emotional depth in your main character will be one benefit but getting inside their mind, now that is invaluable.

The question I ask is – What is your mantra?
Which is quickly followed by – What are your characters mantras?
Posted by Brad R. Cook at 12:44 PM