This week, we are having a conversation with Judy Moresi and offering her latest mystery novel titled Tribal Fires. 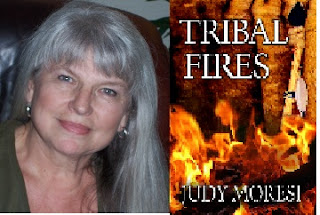 The Writer's Lens: Your latest novel, Tribal Fires, has just been published by L&L Dreamspell Publishing. What is the novel about?

Judy Moresi: “Tribal Fires is a story of mystery, love, separation, and culture clash in a St. Louis setting.”—Vicki Erwin, Main Street Books.
From the Great Pyramid at Giza to the Amazon jungles, photographer Shea McKenna has faced danger on a global scale. She is propelled into a world of fraud and murder when she accepts an assignment to photograph American Indian artifacts for the Missouri Westward Museum. After the theft of relics, the discovery of a forged war lance, and a brutally murdered museum employee, St. Louis’ finest declare Shea and the handsome Indian chieftain who restored the relics suspects. She is determined to solve the crimes and clear her name, but events at a Patrons Ball and a fiery Indian powwow provide more questions than clues. As she gets closer to the truth, she winds up with a ruthless murderer hot on her trail.

WL:What was the hardest part of writing Tribal Fires?

Moresi: Keeping track of my characters and what they were doing when they weren’t the focus of a scene. I’ve since devised Character Sheets, Time Lines, and Scene Plotting Forms to help organize, but not limit, my information. I share these with writers who attend my mystery writing workshop.

WL:When did you decide to start writing mysteries?

Moresi: As a teenager I read horror and science fiction. A fan of Isaac Asimov, I drifted into his Black Widower mystery short stories, then on to the rest of the mystery writers’ enclave.

WL:Is there a theme that seems to reappear over and over in your fiction? Is there a single one thing that focuses your work or do you have different themes for each story?

Moresi: I plan no themes.  I write to entertain, inform, and hopefully help and encourage people who find a kindred spirit in me. When my readers find themes, I tell them to stop it.

WL:When you decided to write full time, how easy was it to take the leap of faith from steady paycheck to full time writer?

Moresi: When will that happen? Details, I need details.

The Writer's Lens: What was your biggest fear when you decided to be published?

WL:If you could have coffee (or drink of your choice) with four other authors from any time period, who would you choose and why?

Moresi: My great-grandfather Jesse Scott read the Bible to me the first six years of my life. I was enthralled. Once I learned to read, my nose was constantly stuck in books. When I played with friends, I made up stories for us to dress in costume and play: cowboys, Indians, pirates, Sheena the jungle girl. I have photos that could be used for blackmailing my playmates. In my sophomore year of high school, my World History teacher, Peggy Moriarity, introduced me to the books of Richard Halliburton, the real Indiana Jones. I was hooked—and in love with a dead man. It didn’t work out.

WL:If there was some advice that you could give to a fellow writer, what would it be?

Moresi: If you’re writing because you love it, God bless you. If you want to make writing a paying career, then you have to treat it as a business, too. You are selling a product. First you write the best darn polished book you can, then you convince an editor or agent that your book will make them money. You must grab their attention with one captivating sentence, often called an elevator pitch because you’ve only the time it takes to get from one floor to the next. Avoid cornering them in a bathroom stall. Very tacky. A query letter should be only one page long with a paragraph listing your writing credentials and one written like a titillating back cover blurb. And don’t take rejection personally. Just keep sending out your manuscripts and stay busy writing your next one. Good luck.

Moresi: Buy my mystery novels, Widow’s Walk and Tribal Fires. Check out my website at www.JudyMoresi.com for published articles, event schedule, photos, and reviews. Attend my Write A Mystery Novel workshop listed at www.stcharlesae.org or call 636-443-4018. Or stalk me.

Judy Moresi's Widow's Walk features a unique setting, an engaging protagonist, and a plot full of surprises. The writing is tight and authoritative. With its gothic overtones, and plenty of comic relief, Moresi has a real winner on her hands. Save this one for a stormy night!
--Joanna Campbell Slan, Author of the Agatha-nominated
Paper, Scissors, Death

I was prepared for a run-of-the-mill, first-time author effort. What I got was a pleasant surprise. Judy Moresi has scored big time with a suspenseful and well-crafted mystery that can hold its own with the most seasoned writer's work. The dialogue is crisp and believable, the characters are living, breathing individuals. Moresi doesn't hit a single false note in this incredible tale of murder and intrigue. One of the best books of its kind I've ever read.
--Esther Luttrell, Author and Screenwriter

The novel is set in an eerie complexity of who dunnits and whys obscured and dominated by an old decrepit Victorian mansion where murder in the past is whispered and talked about in conjecture with violence of the current. At any moment, with every page turned, the reader wonders who will die violently, who will survive.
--Two Mirrors "Times River," Atlanta, GA

Local author Judy Moresi’s latest, Widow’s Walk, may not sharpen your noggin but it sure is a page-turner. With shadowy figures creeping around an old house, a stalker and rumors that the main character’s home is haunted, maybe you shouldn’t hunker down with the tome at bedtime – unless you want to sleep with the bathroom light on.
--Sauce Magazine Review, St. Louis, MO

Laura [Chandler] has inherited a ramshackle Victorian manse complete with falling plaster, cobwebs, creaky stairs and its own ghost. It also comes with a menacing intruder, who writes chilling threats on her door and leaves an animal carcass in her kitchen…[Widow's Walk] gains appeal through the grit and determination of a plucky heroine who has a wry sense of humor.
--Shirley K. Murray, St. Louis Post-Dispatch Book Reviewer

Spooky read for a rainy night. A heroine inheriting a spooky, haunted house is one of my favorite premises and I have to say, Widow's Walk doesn't disappoint. Laura is smart, witty, creative, and disbelieving in the odd things happening around her, instead pitting the blame on a resentful neighbor. There's even a love interest to quicken the heart of romantic readers. The villains are evil but not overdone and there's enough suspects roaming about to keep the reader guessing until the end. The twists and turns of Widow's Walk had me forgetting time, glued to the pages to find out what happened next. My only disappointment was that the book ended. Brava Ms. Moresi.

--P.S. Skochinski, Author in the high desert of California

How do you win a free signed copy of The Tribal Fires?  To enter the contest, simply leave a comment or question on the Coffee with David blog between now (January 9th) and midnight January 14, 2012. Please include your email so we can reach you if you win. The more comments you leave, the greater your chance of winning the contest. If you refer others to The Writer's Lens who mention your name in their comments, I'll enter your name again in our random number generator along with theirs, also increasing your chances at winning! The winner will be chosen after midnight on Saturday, January 14 and the announcement made on Sunday, January 15th, Good luck and comment often. Good luck!

On Wednesday, we will explore another of Erle Stanley Gardner's Mystery plotting techniques (which can be used for any fiction genre): The Murderer's Ladder

Thank you for reading and please visit www.davidalanlucas.com and www.thewriterslens.com. Fiction is the world where the philosopher is the most free in our society to explore the human condition as he chooses.