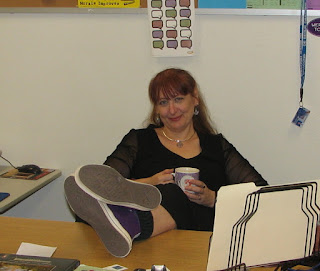 Welcome to Katherine Lampe, who was  featured on the December Broadly Speaking podcast about Magicians & Shamans, which I hosted for Broad Universe.

Professional Tarot reader, student of the arcane, and musician, Katherine lives in rural Colorado, where she hides under a rock and watches the community with a bemused smile on her face. Over the course of her life, she has done everything from hosting a radio show to working in an occult bookstore, and many things in between. In addition to her Caitlin Ross series, she has also published a book of original and re-imagined fairy tales, Dragons of the Mind.

What do you think readers will like about your book? Other than that it's incredibly well-written and well-plotted, with beautiful language and characters who leap off the page and take up residence in their living rooms? (smirk) The comment I've heard most from fans is how *real* the world is. I deal with people the reader can believe in. One person said, "I can believe your protagonist goes to the bathroom." (You can repeat that or not.) I call what I write contemporary supernatural fantasy, but it crosses over into magical realism quite a lot. Most fantasy, when it talks about magical systems and experiences, you get it's fantasy. You think it's neat, but there's still a distance--a sense, even among the people who are experiencing it, that this is out of the ordinary. In my books, the magic and the experiences related to it are just another thing, like taking out the trash. My characters don't spend a lot of time agonizing over it; they just cope. It's part of their lives. As one fan said, I "take magic out of the stratosphere and put it in the living room." Which makes reading my books a powerful and affecting journey.

How much fact is in your fiction? I’m really glad this is one of your questions, because I wanted to get into it on Broadly Speaking but we didn’t have time. The simple answer is: a lot. I’ve been interested in different systems of thought, different interpretations of spirituality, magic and reality almost since birth. So I’ve studied them. Now, when something interests me, my impulse isn’t to read about it. I want to do it, experience it. That means that most of my “research” is “living the life.” I know about the systems I write about, not as an intellectual, but as a participant. It’s in my blood and bones, and when I talk about it, I use that as my starting point.

But it is only a starting point. Because, face it, my experience may be wide, but it’s not universal. Also, I tend to relate to the world and my experience of it on a kinesthetic level. Now, this gives me an edge that maybe some people don’t have, because I’m not limited in my senses. I can describe how something feels in my body, how it sounds, smells, tastes. However,  as interesting as it might be to stick to that, I realize my readers will want something more. What I add is detail, mostly visual and direct experience. When I mediate, I don’t actually go anywhere. When I pray or interact with deity, the gods don’t show up in my kitchen. My characters do go places not in this world and they do have gods showing up in their houses in a way that isn’t common to most mundanes coming from a first-world, Western culture. And that’s where my fiction takes off.

What other genre would you like to write? Epic fantasy. I love those huge worlds with zillions of characters and cultures and all kinds of intricate political maneuvers. I have half a dozen beginnings of that kind of novel in various places, old discs and whatnot. That’s what I started out to write when I started writing seriously in eighth grade. But I’m no good at it. I love world-building, and I can do that fairly well. But my mind just doesn’t seem to be able to encompass the kind of plots that take place in that setting. I hate politics. I hate it when people are stupid and don’t communicate and that’s what advances the plot. I don’t do the sweeping kind of themes that epic fantasy thrives on. I’m good at personal relationship and small venues and personal challenges. So I don’t think I’m going to be putting out an epic anytime soon.

What movie star would be perfect for (your main character) and why? I try to avoid this, because in the past when I’ve cast my stories I end up writing about the actors as I perceive them and not the characters. And I have a horrible time thinking of anyone for the Caitlin Ross books. The closest I’ve been able to come for my protagonists is Miranda Otto (although she’d have to put on about 25 lbs) and Gerard Butler. They’re not perfect, though. 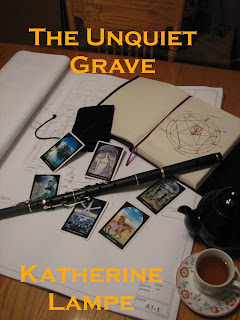 THE UNQUIET GRAVE: For Caitlin Ross, every day is a struggle. Born a witch, she renounced use of her powers out of fear of what they might bring to her and the people she loves.

However, a ghost’s plea and a series of strange events at the bar where her Irish band is playing prove too much temptation for even her strong will. When she discovers that the bar’s owner is a magician bent on raising a demon with the power to destroy her home, she chooses to take up her powers once more, no matter what the consequences.

In challenging the magician and ending the threat of the demon for all time, Caitlin will discover there’s more to the world, and to herself, than she ever imagined.

This is T.W. Fendley. Thanks for reading and commenting on The Writers' Lens.You can find out more about me at www.twfendley.com.