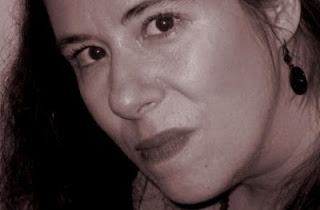 Welcome to Kristi Petersen Schoonover, whose most recent novel, Bad Apple, is a Pushcart nominee. Her short fiction has appeared in Carpe Articulum, The Adirondack Review, Barbaric Yawp, New Witch Magazine,Toasted Cheese, and others, including several anthologies such as Dark Opus Press’ In Poe’s Shadow. She has received three Norman Mailer Writers Colony Residencies and has served as a judge for New York City Midnight's short story competitions. She lives with her husband, occult specialist Nathan Schoonover, in the haunted woods of Connecticut and still sleeps with the lights on. You can find out more at www.kristipetersenschoonover.com.


The Writers’ Lens is about “Bringing fiction into focus.” What brings your writing into focus—the characters, the stories, the love of words? I’d have to say the characters. The inspiration for each of my stories is usually an odd item—a dollhouse crammed with bird bones, preying mantis-egg wedding favors—or situation: a chionophobic who can’t afford to move south, a church that charges $25 a word for broadcasting prayers above the pollution to guarantee they get heard and answered. From there, the characters just tell me who they are and what the significance of that item is in their lives, or how they respond to the situation—the plot, pacing, theme, motif, point of view and everything else is dictated by them. They define what each of my fictions becomes. And I’m perfectly happy to let them: when I’m writing that very first “vomit” draft, it just doesn’t feel like work.

How much fact is in your fiction? I put the greatest attention on setting, because writing has always been an escape to me. I want to see, smell, taste, touch, and hear that world that I’m in, and in order to do that, the setting has to be meticulously accurate—for example, one scene in my short story “Charlotte’s Family Tree” was set in Walt Disney World’s Magic Kingdom in 1979. Once the initial draft was done, I spent countless hours researching what was there that particular year: which attractions were there and what they were called (because some names have changed over the years), which entertainment was going on, what the ticket system was like, every single detail—and that was exclusive of simply describing the smells and temperature of Florida during the season of the year in which the characters were visiting. I always try to set a story in a real place and be very conscientious about those details. Other than that, I make certain I fact-check the same things other writers do: what’s the procedure for bandaging a wound? For planting a tree? You know, the usual.

What’s the highest compliment someone could make about your writing? An artist in any medium can be easily discouraged, I think, by rejection, lack of recognition, and other things of that ilk which are inherent in our profession. That said, I’ve always held that “if I reach one person, I’ve done my job.” So I take joy when I get a Facebook comment, an email, anything that notes someone really enjoyed a particular story, or it moved him, or it spoke to him on some level. The best reaction I’ve ever gotten came today, in fact. I just sent out my “Holiday” chapbook. My Aunt Delores, who has always encouraged my work, called me and all I heard on the other end of the phone at first was laughing. “I wanted to call you tonight, but I couldn’t wait!” She could barely breathe. “Oh, I just finished your story and I loved it! That ending is incredible! You got me again!” Yes, it’s a family member. But she doesn’t love everything I write, and sometimes she flat-out tells me she didn’t care for it. So this was a pretty huge deal for me, that I had her in such fits of laughter she couldn’t even talk. A visceral reaction, therefore, is the best kind of compliment I could get—it’s not just, ‘that was good,’ it’s ‘look what you did to me.’

What’s your favorite writing accessory or reference? Really sharp pencils with great erasers, a good movie score (The Perfect Storm, March of the Penguins and Gettysburg are a few favorites), the awesome Brookstone coffee cup heater my brother Chuck bought me several Christmases ago, and Yankee Candles (wondering? My favorites are Treehouse Memories, Christmas Cookie and Vanilla Lime).

If you could borrow one person’s zest for writing and/or life, whose and why? Hands down, Anais Nin. She was so passionate her words just pulse with it, and she has such a vibrant clarity it’s hard for me not to read something of hers and scream, “yes, yes, yes, you read my mind!” She cared nothing of what others thought and everything about what others thought of herself and her work; she was on the edge but amazingly in touch with her own tenuousness, and was so comfortable with what was in her own broken soul that she wasn’t broken at all. She worked hard, she partied hard, and when she didn’t have a pen in her hand, there was one scribbling in her mind until she could get one in her hand. I aspire to be like her: Writing is not what I do. Writing is what I am. 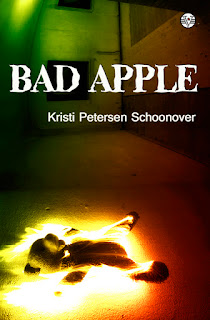 BAD APPLE: After an unfortunate incident on a Maine apple orchard, precocious teen Scree is left with a father she’s not sure is hers, a never-ending list of chores and her flaky brother’s baby. In a noble move to save the child from an existence like her own, Scree flees to a glitzy resort teeming with young men just ripe for the picking. But even as life with baby becomes all she’d dreamed, Dali-esque visions begin to leach through the gold paint…


Fans of THE HAUNTNG OF HILL HOUSE, THE LOVELY BONES, and CARRIE shouldn't miss BAD APPLE--a dark, surreal ride that proves not all things in an orchard are safe to pick.

50% of the author's royalties from the sale of Bad Apple are being donated to the American Association of Caregiving Youth, a non-profit organization for the support of children who are caring for ill, injured, elderly, or disabled family members.
_____________________


This is T.W. Fendley. Thanks for reading and commenting on The Writers' Lens.You can find out more about me at www.twfendley.com.