George Sirois: More "fact" than you'd think in his YA sci-fi novel, EXCELSIOR 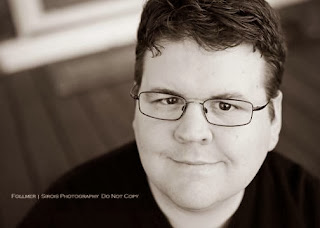 Welcome to George Sirois! He self-published his first novel From Parts Unknown in November 2002, which he is re-working as a five-part eBook serial and paperback release. When he self-published his Young Adult/Science-Fiction novel Excelsior in July of 2010, it was named “Top Pick” by Night Owl Reviews and a quarter-finalist in the 2011 Amazon Breakthrough Novel Award contest. Working with Rocking Horse Press in 2013 gave the story a much-needed new lease on life. George’s writing has also been seen on 411Mania.com and Booktrib.com as a featured columnist. After living in New York City for most of his life, George and his wife and their two dogs now happily call St. Louis, Mo., their home. In his spare time, George is an avid cinephile, a collector of film scores, a lifelong fan of the New York Giants, and enjoys West Coast Swing dancing.

The Writers’ Lens is about "Bringing fiction into focus." What brings your writing into focus-- the characters, the stories, the love of words? I would have to say, more than anything, the stories. I love taking a character or group of characters or a city or even a whole world and filling them with their own mythology. After watching the outstanding documentary on DC Comics super-villains called "Necessary Evil," I would add that a really fun part of my writing is creating the right villain to put my protagonists to the ultimate test.

How much fact is in your fiction? More than you would think. When I was in high school, I filled steno notebooks with stories when they should have been filled with homework assignments or notes in class. (I prided myself on being quite the underachiever.) And during my senior year, I shared some of those stories with my English teacher and she loved them. She encouraged me to keep going, and at the end of the year, she took those stories into account when she calculated my final grade. I was two points short from having an 85 and she added those two points, calling it "Excelsior Extra Credit." I never forgot that and made sure to add that moment into my novel.

Would you share a bit about your next project? I have two projects I'm working on now. One is the first of two Excelsior sequels. I don't want to go into a lot of detail on this, except to say that it'll be longer than the first, it'll be darker than the first and it will go into a lot of my main character's backstory.
The other is a complete rewrite of my novel From Parts Unknown into a five-part serial. It's a more adult-oriented science-fiction story, something more along the lines of the sci-fi films of the 1970s like Rollerball and Soylent Green.
I asked myself in 1995, "What if wrestling was real?" and a few years later, I wrote a concept to a video game, then a treatment, then over 10 drafts to a screenplay, and then - finally - the novel. I self-published it in 2002 through iUniverse, but when I re-read it in 2011, I realized that it wasn't very good anymore. So I got the rights back and started giving it a full overhaul.
I have some bits and pieces to add to Parts 1-4 and the outline to Part 5 is almost finished. 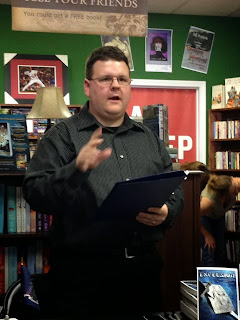 What's your favorite way to interact with fans/readers? Love going on Facebook and Twitter to meet new readers and introduce them to my work through my author page - http://www.facebook.com/excelsiorbooks - but that's no replacement for meeting them in person and answering any questions they may have. The launch party for Excelsior was really special since I got to speak to a lot of kids that were really looking forward to reading the story.

What tune/music could be the theme song for your book? I've always been a lover of film scores and one of the first things I did after completing the first draft of Excelsior was put together my own soundtrack for it. While a major scene used Hans Zimmer's score from King Arthur, I think the "theme" music would be from Trevor Jones' Thirteen Days. The first track "Lessons of History" and the last one "The Will of Good Men" would be the perfect music to open and close the movie. (I'm always holding out hope that Excelsior will find its way to the big screen in my lifetime!)

EXCELSIOR -- Created by high school senior Matthew Peters, Excelsior – savior of faraway planet Denab IV – is becoming an Internet sensation as the main character of a popular online comic strip. But before Matthew can enjoy his burgeoning success, a beautiful older woman arrives at his school and tells him that not only is she from the planet Denab IV, but that Excelsior's lifeforce lives within him. Now, with Excelsior's old enemies regaining strength, Matthew realizes he is the key to Earth's survival and Denab IV's salvation, and he has an opportunity that he never thought possible, to become his greatest creation.
Paperback: http://www.rockinghorsepublishing.com/excelsior.html
Kindle eBook: http://www.amazon.com/Excelsior-George-Sirois-ebook/dp/B00GNI41FI/ref=sr_1_1?ie=UTF8&qid=1387154252&sr=8-1&keywords=excelsior+sirois
Nook eBook: http://www.barnesandnoble.com/w/excelsior-george-h-sirois/1100074453?ean=2940148861881&itm=1&usri=excelsior+sirois
Posted by T.W. Fendley at 9:28 AM