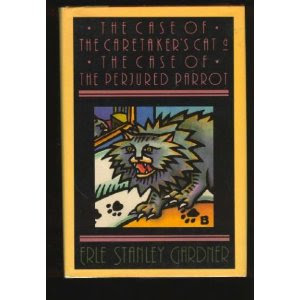 Do you know the name Erle Stanley Gardner? Maybe not. It is likely you have heard of one of his famous protagonist: the famous Defense Attorney Perry Mason--known both in book and from TV as portrayed by Raymond Burr. Gardner was proclaimed to be the king of American mystery fiction. He was a criminal lawyer who filled his mystery masterpieces with intricate plots with more twists than a wood screw. Gardner wrote novels, short stories, radio dramas, and articles on forensics and travel. He published 134 novels and 15 non-fiction books under his own name and A.A. Fair, Kyle Corning, Charles M. Green, Carleton Kendrake, Charles J. Kenny, Les Tillray and Robert Parr. On Wednesday, we will post a blog on Gardner's "Theory of an Unstatic Plot" which helped turn his mind into a "plot machine."

The Case of the Caretaker's Cat (1935) – "Charles Ashton is a cranky old caretaker with one friend in the world: a Persian cat. Samuel Laxter, his new boss, wants him to get rid of the feline. A simple case . . . on the surface. But when Perry Mason gets involved, there's suddenly more at stake. Like some priceless diamonds. A million dollars. And two gruesome murders. Only Mason with the invaluable help of Della Street and Paul Drake, can crack The Case of the Caretaker's Cat."

The Case of the Perjured Parrot (1939) – "Fremont Sabin, an eccentric millionaire, is found murdered in his country cabin. The only witness: his pet parrot. The bird keeps saying, "Helen, put down that gun." But is a parrot's testimony valid in a court of law? And what's Perry Mason to do when he discovers that the dead man had two wives named Helen? In one of his most ingenious and entertaining cases, Perry Mason puts Della Street and Paul Drake to work to help solve The Case of the Perjured Parrot."

How do you win? To enter the contest, simply leave a comment or question on The Writers' Lens blog between now (Nov. 28) and midnight December 3, 2011. Please include your email so we can reach you if you win. The more comments you leave, the greater your chance of winning the contest. If you refer others to The Writers' Lens who mention your name in their comments, we'll enter your name again in our random number generator along with theirs, also increasing your chances at winning! The winner will be chosen after midnight on Saturday and the announcement made on Sunday, December 4th. Good luck and comment often.

Thanks in advance for your comments, and good luck!