Today marks the last day of Chinese Ghost Month, a time in which it is believed that the spirits of the deceased leave the land of the dead and visit the living, similar to Halloween.

As part of HEREAFTER author Terri Bruce's book launch, The Writers' Lens hosted a writing contest seeking 200-word (max!) stories based on one of the Ghost Month writing prompts on Kelly A. Harmon’s blog.

I had the tough job of choosing between seven excellent stories--check them out in the Comments section of the contest page. My criteria were originality, story-telling style and writing proficiency. Since I'm friends with one of the contest entrants, I asked my husband John to assist as an unbiased judge (whew--friendship didn't influence my editorial judgment!).

Congratulations to the Grand Prize winners--Vicki Lemp Weavil and E.M. LaBonte--who will each receive a four-book pack of ghost stories. You can read their entries below. And congratulations to:
GRAND PRIZE WINNER: By Vicki Lemp Weavil
Prompt: A spirit is refusing to return to the spirit realm at the end of Ghost Month. Why? What will he do instead of returning?

I feel the slap, though my body has long since melted into earth.

The blow that resonates through bone, the tang of blood oozing between teeth.

I move closer to the girl and she shivers. Her dark head is bent over the teakwood table, her fingers tracing patterns in the wood. She dare not touch her cheek or display any sign of pain.

A man stands over her, his belly ballooning under his silken robes. His black hair is meticulously oiled and arranged in an elaborate topknot. He is the picture of success and achievement, the epitome of centuries of culture.

He beats his wives and daughters.

This girl will acquiesce. She will survive.

I sat at that table once. I suffered those blows. I did not bow my head. I died.

He turns away, satisfied. As he grabs a piece of fruit from a jade bowl he does not notice the Bird Spider that I have coaxed there. Even the dead possess some powers.

I wonder if he knows, wherever his spirit wanders, what fatal mistake he made. How wrong he was.

This is my house.

GRAND PRIZE WINNER: By E.M. LaBonte
Prompt used: Describe Ghost Month from the perspective of the ghosts—are they happy to be turned out of the spirit realm or annoyed? Are they pleased with the offerings left for them or disgusted? Can they touch, smell, and taste the offerings? Does everything feel, taste, and smell like it did when they were alive?

Kya waited by the grave stone, watching her brother and mother walk away. Her time in the land of the living was limited but she did enjoy what she could of it.

This year they had left her a chocolate chip muffin, her favorite. Since they still remained in the graveyard, the food was not yet edible. She couldn’t even touch the sweet chips or smell the delicious scent till the living had walked away. Thank the spirit keepers that the animals didn’t count in the rules, or she’d never get to taste that muffin.

When the grave yard grew silent once more, she picked up the chocolate chip delight. It was still warm to the touch. Kya smiled at the thought of her brother baking it just for her. The scent was more than the spirit realm could ever offer. She took a bite. The muffin crumbled in her hands and the taste only lasted for an instant. She held the memory of chocolate, even as the crumbs turned to ash in her mouth.

Click to see other stories (in the Comments section)

About HEREAFTER and author Terri Bruce: 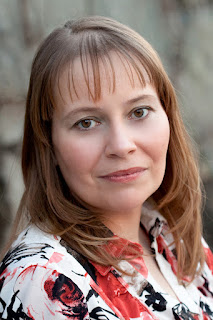 Terri Bruce has been making up adventure stories for as long as she can remember and won her first writing award when she was twelve. Like Anne Shirley, she prefers to make people cry rather than laugh, but is happy if she can do either. She produces fantasy and adventure stories from a haunted house in New England where she lives with her husband and three cats.

Where to Find Terri: 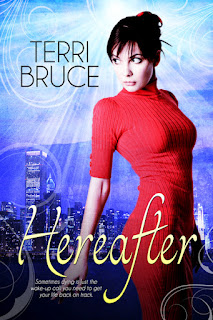 HEREAFTER: Why let a little thing like dying get in the way of a good time?

Thirty-six-year-old Irene Dunphy didn't plan on dying any time soon, but that’s exactly what happens when she makes the mistake of getting behind the wheel after a night bar-hopping with friends. She finds herself stranded on earth as a ghost, where the food has no taste, the alcohol doesn’t get you drunk, and the sex...well, let’s just say “don’t bother.” To make matters worse, the only person who can see her—courtesy of a book he found in his school library—is a fourteen-year-old boy genius obsessed with the afterlife.

This sounds suspiciously like hell to Irene, so she prepares to strike out for the Great Beyond. The only problem is that, while this side has exorcism, ghost repellents, and soul devouring demons, the other side has three-headed hell hounds, final judgment, and eternal torment. If only there was a third option…
Listen to the first chapter
Read an excerpt

Thanks to everyone for reading and commenting on The Writers' Lens.