Welcome to Gerry Mandel, whom I've had the pleasure of getting to know through the St. Louis Writers Guild. Gerry is a freelance writer, focusing on short stories, essays, plays, and his blog (when the spirit moves him). He has been published in Untamed Ink, Toyon, Big Muddy, and Palo Alto.

His novel about Charlie Chaplin, for whom he holds a lifetime passion, was published in 2010 and has been accepted by the Chaplin Archives in Montreaux, Switzerland. April 16 is Charlie Chaplin's birthday, so Gerry's dropped the Kindle price on SHADOW AND SUBSTANCE to $2.99 for the month of April!

Several of Gerry's plays have been  produced by St. Louis area theater companies. A documentary he wrote and directed about the Lewis and Clark sculpture on the St. Louis riverfront won an international award. He also produces video biographies for his company, The Life Preserver. He lives with his wife, Mary Lee, and two golden retrievers in Kirkwood.

Comment on The Writers' Lens between now and April 30 for a chance at winning your choice of a print or ebook of SHADOW AND SUBSTANCE. Mentioning Charlie Chaplin will double your chances! Be sure to leave your email address.
What inspired your latest book? I remember the moment when the “What if...” inspiration struck. I was in L.A. producing music tracks for Busch Beer TV spots. This was during my “Mad Men” career in advertising. The session took place at night at A&M Studios, on LaBrea at Sunset Blvd. The “A” is for Herb Alpert, who made a fortune in the 60’s and 70’s with the Tijuana Brass. With his pot of gold, he bought what had originally been the Chaplin Studios. One of the sound stages had been left intact and was declared a Historic Landmark.
Around  10:30 or 11:00 on this particular night, Perry Botkin, the guy heading up the recording session, called for a half-hour break. Instead of talking with the musicians, as I usually did, I thought, “I wonder what the Chaplin stage feels like at night.” I walked down an empty hallway that led to the stage. The heavy metal door was unlocked. I opened it and peered into the dark space. Only the four red glowing letters in “Exit” offered any light. I stepped through, closed the door quietly behind me - I wasn’t sure if it was okay for me to be in here - and walked into the room.
I thought about Chaplin, about all he accomplished here, how he revolutionized filmmaking and comedy, how he became the most famous man in the world. Then, having grown up reading dozens of science-fiction books and short stories, I thought, ‘If I concentrate, maybe I can contact Charlie.” At least conjure up some sensation of his presence. Needless to say, Charlie didn’t show up that night, but the idea for my book did. “What if someone from the Midwest comes out to LA on an assignment and establishes contact with Chaplin.”
I made some notes in my hotel room that night, while the idea was fresh. Several years later I completed the first draft of my novel.

What do you think readers will like about your book? This is a question that always stumps me. What I think readers will like is often different from what they tell me they like. As far as my Chaplin book goes, my best guess is the aura of Hollywood today and yesterday; the portrayal of Chaplin in a realistic and entertaining manner; the flight of fancy I engage in as Charlie and the protagonist (Cooper Thiery) move between the present and the past.
I wasn’t sure how well the Chaplin character came through until I received some comments from Chaplin authors/experts. For instance, Kevin Brownlow is a highly respected figure in the world of film. He received an honorary Academy Award in 2010 for his continued role in film and cinema history and preservation, and produced a landmark documentary on Chaplin for the BBC several years ago. I had met him at a Buster Keaton conference in fall of 2012. He said, “I was impressed by your book. I enjoyed it so much I made it last as long as possible. It was fascinating to read a fictitious version of an event one has been through oneself...You are a very good writer and your imagination caught me to such an extent that I began to feel as though I had just encountered Chaplin myself!”
After that review, I really didn’t care if I ever sold another book or not. Kevin made it all worthwhile.

Would you share a bit about your next project? I’ve started two of them. One is fiction. Working title: “The Eulogy Club.” A group of 4 friends decide to deliver eulogies to their friends while everyone is still alive and can appreciate the sentiments. Except some unexpected and unwanted observations arise. This, coupled with the male reluctance to appear vulnerable, causes some problems, threatens their relationships. Right now the “book” is somewhere between humorous and dark; I’m not sure where it will end up.
The other is non-fiction. This comes from my fascination with Chaplin. I’m considering a close look at his decision to make “The Great Dictator” in 1940 (actually began work on it in 1939) when everyone else in Hollywood was afraid to upset Hitler and Nazi Germany for fear of losing box-office. The book would say a lot about Chaplin’s brave stance and Hollywood’s cowardice.
I'm more comfortable with fiction, and have never tried a non-fiction book. Still, the subject intrigues me.

How much fact is in your fiction? My novel is based in fact - on the character of Chaplin, his personality, his achievements, his fears. His relationships with W. R. Hearst, Roscoe Arbuckle, his mother. But many of the events are fiction. I made up several situations and encounters that never took place but I felt were necessary to keep the reader involved. The process of researching and writing a documentary in Hollywood is also factual. The landmarks, clubs, restaurants, parks, streets of Hollywood - now and 80 years ago - are real. I spent a lot of time in L.A. when I was in advertising. Several people who read the book, and know something about Chaplin’s life and career, have asked me “Did that really happen?” Which tells me the fiction was close to acceptance as fact. I think that’s paramount in this kind of novel, dealing with real history and characters. The fiction has to flow seamlessly from fact. The time travel device is, obviously fiction. At least I think it is.

What are your top three reasons for writing? I have just one reason, with many sub-reasons. The driving force is because I have to write. When I don’t write, I get irritable, impatient, critical of other writing, tough to be around. Just ask my wife. The act of writing, of moving it from my head onto paper or onto the computer screen, is pleasurable and fulfilling. I often ask myself, “Am I wasting my time?”, but I’ve pretty much learned to silence that inner critic. The sub-reasons include the need to “move” people, much as a musician might do with a soulful blues or a magnificent piano concerto. There's also a "look at me" element in there. I'm proud of being a writer. Also, I like to see see where the initial spark leads. Often it surprises me. I have no idea usually where the journey I’m about to take will end up. I know, some writers and instructors say, “You need a plan, an outline, a map. Otherwise how do you expect to get there?” I don’t feel that way. I like the thrill of the journey, the unexpected turns in the road, sheer drop-offs over cliffs, thunderstorms and rainbows. My third reason is simple. I can say, when it’s finished, “I did that.” Even if it never gets published, it’s still mine. Of course I’d rather everything I wrote got published.

What is your opinion about fiction involving time travel? This is a special category. As a reader, you either buy it or you don’t. As I mentioned before, I grew up with a steady diet of science-fiction: Bradbury, Van Vogt, Clarke, Del Rey, Heinlein, etc. I knew it was possible. Still do, in a way. But it’s not everybody’s cup of tea... or tumbler of bourbon, to get closer to the truth. My wife, when she read my first draft of the novel, said, “I like it, but it’d be better without that time travel stuff in there.” 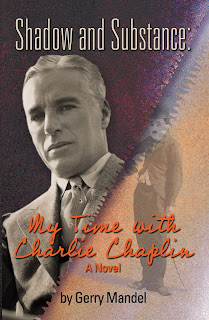 Several years ago, a movie with Christopher Reeves had a wide audience. It was “Somewhere in Time,” a love story the moved from today back in time. Prior to that, there was a novel by Jack Finney, “Time and Again.” It is considered a classic today, even though it deals in a realistic way with time travel.
As a writer, I know I took a chance with time travel. That didn’t matter. This is the story I wanted to tell, in a manner in which I told it.

Find SHADOW AND SUBSTANCE on AMAZON

SHADOW AND SUBSTANCE: Hollywood, today and during the 1930's, is the setting for this intriguing tale of an unknown writer, and a world-famous film artist who died over 20 years ago. The project becomes a conflict of loyalties, as the writer finds himself torn between his drive to succeed and his desire to protect Charlie Chaplin. Enter Charlie, now confronting the man whose job it is to discredit his legacy.