The Undefined Element of a Fight Scene 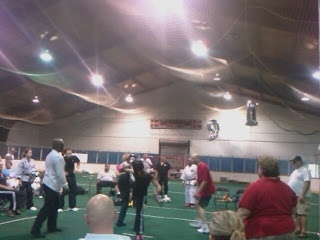 Today I am restarting a series of popular blogs on writing the fight scene. The following, with minor edits, is the only blog I plan to repost here from that series.

Over the course of a series of blogs on writing the fight scene, which you can find on my old blog site (http://davidalanlucas.blogspot.com/) , I have gone into the mechanics of fighting and how to try to capture those on the written page (novel, screenplay, short story, and so forth) .  I have written about the psychology and general strategy of the trained and untrained fighter. We have discussed the general places to strike and how the weaker opponent can easily defeat the stronger opponent. But, before we can step further, there is one element that we need to explore--an undefined element of passion.

I use the word passion with a great deal of trepidation. Most people might imagine passion to be emotion. It's emotion, but only a portion of it in the context with which I use it here. The word passion is used here to define the determination and the core from which your character (or you yourself in real life) drive yourself to win the conflict. If you have watched and read enough fight scenes you have seen the well written scenes and the ones that have struck you falsely. Not because the fighter or fighters did something that was improbable (or simply impossible). It was because the fight scene seemed arbitrary--derived solely because some formula said there had to be an act of conflict at that spot.

The good fight scenes are organically grown from your protagonist need to confront the antagonist. Ask yourself:

The outstanding and memorable fight scenes take this organic growth even further, by asking the following questions:

You may have just blinked reading these last questions, so let us explore them by using a few examples. While I don't know what you read or watch, I will use a few examples:

In Star Wars--the Original trilogy--Luke Skywalker fights Darth Vader, his father twice. In the first fight, he risks losing his life. Vader only cuts his hand off and rips off his innocence by declaring Luke was his son. In the second fight, Luke is determined to win his father back to side of light. He first risks losing his life. What does he win? He does bring his father back, but at the same time he loses his father.
In Star Wars--the prequel trilogy  (made after the original series)--Obi-Wan Kenobi fights Anakin Skywalker, his pupil and self-proclaimed brother. He has to stop Anakin and try to get him to come back to the light. Obi-Wan risks losing his life and possible failure as well as losing his friends to the dark side. Obi-Wan wins the fight. He does lose his friend and leaves him for dead (or dying really). Anakin loses all he loved for a mechanical suit and the dark side.
In Dr. Horrible's Sing-Along Blog, Dr. Horrible, in this tongue-in-cheek reverse tale of where the villain is the hero, goes to fight his arch-nemesis Captain Hammer. Dr. Horrible risks losing his opportunity to join the Evil League of Evil that he dreams to join and his life--for failure is clearly to be met with his own death. The opposite of this is what he will gain if he wins.  What he does lose when he wins is the love of his life, Penny, as she dies in his arms and perhaps his own desire to be what he has become--for in the end, after all the celebration, he is alone and looks lost to himself.

There are a lot of other examples I could have chosen from. Instead, I ask if any of my readers would take a moment, think about the questions above, and write in the comments about a story that you can diagram as the above.