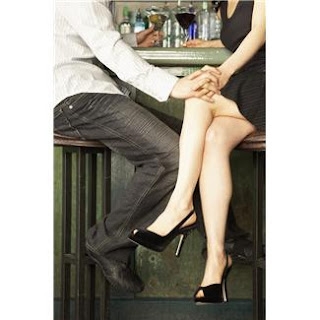 One of the fun things about these fight scene posts is the fact a lot of the information I am providing can be used in real life in a real fight. For the beginning of this series, please visit my Coffee with David blog will be linked at the end.

When writing or talking to fellow writers about “The Third Person,” their minds usually run to writing in the third person. What we are about to discuss has nothing to do with writing in the third person. Instead, “The Third Person” is an object or another character in the story one of the people in the fight will throw, slam, shove, so forth the other person into.  As you know as an author, your characters are not fist fighting in a vacuum (unless you are writing a scene in space and nothing is around at all--if so, you can stop reading this entry as it will not help you write that scene). Thus, there are objects and/or people around the people fighting. These objects or other people can be used as weapons. Let’s walk through an example to explain further:

Question 1: What objects are around in the setting?
Obviously, the bar. There may be bar stools, tables, chairs, bottles, glasses, a juke box, a video game (I have seen hunting and golf games at some places), a television,  a pool table (with pool balls and pool cues), and maybe musical instruments.  There should be other  people (at least the flirting Diane), the bartender (unless either George or Simon (or Diane) are the bartender. Maybe George or Simon have some friends who will come to their aid in a fight?

Question 2: Who is the point of view character?
Let’s pick Simon just because he is the one starting the fight.

How would Simon view the fight? He is mad. He started the fight. Is he scared and hiding it behind bravado? Does he love Diane and feels hurt? The fight starts with the normal name calling and puffing up of chests. Then comes pushing and shoving. What would happen if Simon pushed George into a table? Write down your thoughts.
I can easily picture George losing his balance—at least for a moment, during which he is vulnerable. He might knock over some things. But generally he is ok.

Now let’s escalate the fight. George grabs Simon, spins him around and releases hi,. What do you see as the possible outcome of this?

Depending on when George let go and if he was trying to aim Simon into something—Simon could hit anyone or anything. Hitting someone might knock them over. That could start a brawl. But what if someone in the crowd was a friend of Simon’s who was going to step in to jump George for picking on his friend? Now Simon’s friend (let’s call him Kevin), is knocked over as well. Kevin might knock his head on a table or a chair or other object. Kevin and Simon will probably recover quickly, but:
1. They have to pick themselves up off the ground before they can fight (unless they know some kind of ground fighting and they didn’t end up too far from George).
2. They could be injured. Simon just did an impersonation of a bowling ball. He might have the wind knocked out or even a broken rib. Kevin, because he just had Simon roll into him, could have a twisted leg, a broken tooth or nose (if he fell forward over Simon and did a face plant), he could have a fractured skull or be knocked out (if he fell backwards and struck a table corner just right).
3. What if Simon or Kevin roll into or fall on Diane? There are a lot of comedic situations which can stem from that. However, from a serious point of view, you now have another “Third person” who can be injured or hamper or even enhance the fight scene.

Question 3: What would happen next?
My response is Simon does a running tackle, tackling George through the bar window. Why? It’s a bar fight, so why not. Now, what is the result of using the window as “The Third Person”? Glass is shattered. It could have cut or killed either George or Simon. Depending on where the bar is, the shattering of the glass could draw unwanted attention. The glass could have flown into other people. George and Simon may have landed on other people. They could have hit a hard paved parking lot, sidewalk or parking tire stop. What other damage could have been caused? Are they able to still fight? Did Diane pour her drink on them both and walk away? Did the bartender take a baseball bat to them? Where are the bouncers?

Question 4: How does the setting magnify any symbolization in the fight or symbolizes the fight?
If you haven’t asked your self this question in your writing of a fight scene, you should on the re-write of it. You are passing up a great opportunity. The use of the third party can resonate the fight and the overall story symbolism in ways your reader will not realize until afterwards how the microcosm fits into the universal story you are writing.

In a story, the setting and other characters should be brought into the fight scene to enhance the conflict. Fight scenes can seem chaotic, especially as you draw “the Third Person” into them, but this is where your craft and the story come together to meld the fight into the larger story.

As a side note: In a real life self-defense situation, never forget “The Third Person.” It can be a handy method of escape or stopping the attacker or fight from escalating.

Thank you for reading and please visit www.davidalanlucas.com and www.thewriterslens.com. You can also follow me on twitter @Owlkenpowriter and the Writer’s Lens @TheWritersLens. Fiction is the world where the philosopher is the most free in our society to explore the human condition as he chooses.
To find the beginning of the “Writing the Fight Scene” blog, please visit http://davidalanlucas.blogspot.com/
Posted by Unknown at 11:17 AM