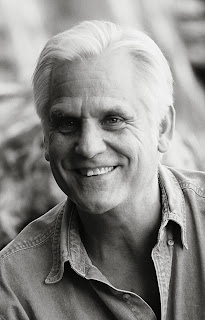 Welcome to Jeffrey Penn May, a fellow member of the St. Louis Writers Guild. He has won several noteworthy short fiction awards. His story “The Wells Creek Route” received a Pushcart Prize nomination, and his novel Where the River Splits, an excellent review in the St. Louis Post-Dispatch. Jeff has published mountain climbing articles, short stories, poems, novels, technical writing guides, and education articles. He was the principal of a small alternative school where he organized a fund-raising climbing expedition and appeared in television and radio spotlights. He wrote and performed a short story for Washington University Radio and was a consultant to a St. Louis theatre company. Jeff worked as a waiter, hotel security officer, credit manager, deck hand, technical data engineer, creative writing instructor, and English teacher. His adventures include, but are not limited to the following: floated a home-built wood and barrel raft from St. Louis to Memphis, navigated a John boat to New Orleans, drove an old Volkswagen alone 8000 miles around the west, spent a month in a dirt-floor shack in west-central Mexico digging for Pre-Colombian artifacts, climbed mountains from Alaska to South America, and spent several days in the Amazon jungle. Visit Jeff’s website at www.askwritefish.com.

Where the River Splits
St. Louis couple, David and Susan Brooks, go on a canoe trip in the Canadian wilderness; it’s a last-ditch effort to evaluate their marriage. The trip turns into disaster as their canoe capsizes leaving the couple stranded on opposite sides of the river and each believing the other is dead. David soon discovers that his wife survived, but satisfied that she is okay, decides not to reveal himself to her. How will she survive? While Susan returns to St. Louis to cope with the loss of her husband, David begins his new life in the Wyoming mountains. But can anyone really start over?

The Writers’ Lens is about “Bringing fiction into focus.” What brings your writing into focus – the characters, the stories, the love of words? All three. The idea for a story might start with plot but ultimately it’s focus must be on the characters, and if you don’t love words your writing will read as if you were watching a tone-deaf dancer. 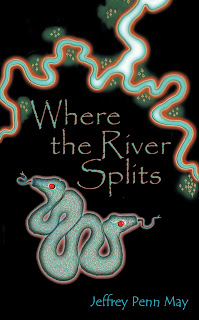 Many of the scenes in Where the River Splits are in St. Louis . How important was it for you to use St. Louis as a setting for the novel? Extremely important. I’ve lived in St. Louis for most of my life, know its streets, parks, its feel, the smell of hops wafting up Pestalozzi street from the brewery, the small corner taverns, the airport expansion leveling and paving over the streets of my childhood, all of it serves as a backdrop to the novel, especially the homes being torn down.

Steve Wienberg, in his St. Louis Post-Dispatch review of your book, says that your scenes feature “geography as much as the characters.”  Can you explain what he means and what it means to you?  What is the role of the landscape? A central conflict occurs when the main couple, Susan and David, argue about what is important.  Susan wants to visit museums as well as explore the outdoors.  For David, however, escape to the wilderness is essential to his well-being, and when anxious, he becomes almost obsessed with that escape. Each phase of the central conflict is mirrored in the locations: St. Louis, Canada, Wyoming, San Diego, Mexico. Also, of course, the river itself is a metaphor, their lives splitting and then flowing back together.

Where the River Splits alternates between the male and female point of view.  Why did you choose this approach?  Did you find it difficult to write the female point of view?  Was this structure something you decided on from the beginning, or did it evolve during the writing of the novel?My wife gave me the story idea and originally I wrote from the male point of view. But it soon became one-sided and therefore bordering on one-dimensional. Susan needed to develop as well. Once her point of view appeared, the novel took off. Their journeys were set. Apparently, it wasn’t too difficult for me to write from the female point of view, at least based on reader comments such as the following: “Jeffrey Penn May possesses something rare as a male writer. I usually avoid fiction with romantic angles written by men, as most generally do not accurately capture a woman's perspective and thoughts on relationships and emotions as I believe they need to be captured to make a truly entertaining and believable story. However, Jeff describes the often heartbreaking sensitivities, pain, fears, and dilemmas of the female psyche and describes them in ways that I can relate to as a woman - not a man's view of what he thinks she might be feeling.”

What’s the highest compliment someone could make about your writing? Fortunately, this difficult question has been answered for me. While the review in the Post-Dispatch made me feel good about my work and I’ve gotten many excellent responses from readers online, the editors who nominated my story “The Wells Creek Route” for a Pushcart Prize provided a pretty good compliment. “This is more than good writing. This is what happens when good writing, superior craftsmanship and honesty and courage all come together.”

Other works by Jeffrey Penn May:

No Teacher Left Standing--Sarah Morgan is a first-grade teacher who must fend off a libelous, vitriolic attack from a mean-spirited, crazy parent, and confront a duplicitous principal and a Machiavellian superintendent, misguided, confused colleagues. Sarah must survive on her own, against her nurturing personality, and outwit her tormentors. And, after two miscarriages, she is pregnant again. Sarah Morgan has characteristics of both Marge Gunderson in Fargo and Tom Sanders in Crichton’s Disclosure, however, she is neither. She is a unique individual who represents the best in all of us and shows grace, courage, and understanding as a first-grade teacher under duress.

If you are one of the 6.2 million schoolteachers in the United States , then you are likely to recognize and appreciate the circumstances facing Sarah Morgan, a first-grade teacher in a “good, suburban school." If you have ever thought about education reform, you might want to read about what faces many teachers in this country. Or if you are just looking for a good, suspenseful drama in an unusual setting, then you might enjoy No Teacher Left Standing.

The idea for No Teacher Left Standing came from classroom experience. While it is fiction, the story has a solid basis in fact, and reflects challenges my wife and I have experienced over the years. I hope you will enjoy following Sarah Morgan as she survives her first-grade classroom and those who try to destroy her.

Cynthia and the Blue Cat’s Last Meow-- Written in a poetic style reminiscent of Richard Brautigan, "Cynthia" is a story of red berries and howling caverns, fury and fishing, moonlight and candlelight, where we dream of blue cats and idyllic sensuality. The offbeat natural setting progresses into a rich ménage of unusual happenings and vivid colors, a land where many of us would like to visit.

Eight Billion Steps is Jeff’s uplifting, life-affirming odyssey, told with honesty and humor, interspersed with moments of terror. Although not written as a "How to beat cancer book," it does contain some practical information that may help.

Finding Your Fiction: Concise Steps to Writing Successful Fiction--A condensed guide for motivated writers who want to focus more on their own writing rather than reading about how to write. Avoids excessive examples and endless activities. Clear, concise, and direct. A poor person’s MFA.

Helps you avoid amateurish errors (professional errors are often hailed as “groundbreaking”). Gives you a strong foundation to build on and set you forth on a lifetime of exquisite misery -- for there is no misery as grand as the struggling artist, poet, writer. Mastering literary tricks and infusing passion into your work requires you to sell your soul to the devil and endure a lifetime of pain, which is of course hyperbole.

There are no “rules.” However, you should learn the rules before you break them. You should master accepted “norms” before deviating from them.

Roobala Take Me Home--In "Roobala Take Me Home" Jesse Enoob fights insanity while reflecting on his absurdly stylized name and his Roobala-chasing misadventures. He was once a "healthy" MACOFF Corp Repo man reliant on Goohoobing Info-Searches and "correct" Inner Space Theory. But a seemingly innocuous event, repossession of an old man's tuba, causes him to lose his job, and his Goohoobing, and sends him careening on a comic odyssey of self-discovery, disillusionment and survival. "Roobala Take Me Home" applies western themes to a futuristic Earth and space frontier. It is a grand comedic novel in the tradition of Kurt Vonnegut, Richard Brautigan, and Douglas Adams, full of romance, sex, adventure, mystery, literary and cultural allusions, and financial crisis. Aside from being told by publishers and agents that Roobala is "beautiful, witty, and surprising," that I have a "vivid imagination," that there are many "beguiling moments" and many "admirable aspects" one reader who I barely knew stared me in the eyes and said with the deepest sincerity, "You're crazy."

The Wells Creek Route and Other Stories
Notable and award-winning stories from Jeffrey Penn May.


This is T.W. Fendley. You can find out more about me and my books at www.twfendley.com. Thanks for reading and commenting on The Writers' Lens.
Posted by T.W. Fendley at 1:00 AM

Email ThisBlogThis!Share to TwitterShare to FacebookShare to Pinterest
Labels: Jeffrey Penn May, Where the River Splits