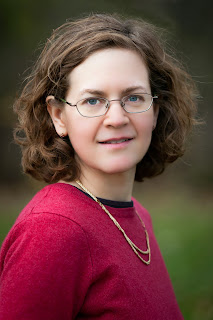 Welcome to Sandra Ulbrich Almazan, whom I met through Broad Universe. We became friends when we both joined a group Terri Bruce started a couple of years ago called the Blog Ring of Power.

Sandra started reading at the age of three and only stops when absolutely required to. Although she hasn’t been writing quite that long, she did compose a very simple play in German during middle school. Her science fiction novella Move Over Ms. L. (an early version of Lyon’s Legacy) earned an Honorable Mention in the 2001 UPC Science Fiction Awards, and her short story “A Reptile at the Reunion” was published in the anthology Firestorm of Dragons. She is a founding member of BroadUniverse and a long-time member of the Online Writing Workshop for Fantasy, Science Fiction, and Horror. Her undergraduate degree is in molecular biology/English, and she has a Master of Technical and Scientific Communication degree. Her current day job is in the laboratory of an enzyme company; she’s also been a technical writer and a part-time copyeditor for a local newspaper. Some of her other accomplishments are losing on Jeopardy! and taking a stuffed orca to three continents. She lives in the Chicago area with her husband, Eugene; and son, Alex. In her rare moments of free time, she enjoys crocheting, listening to classic rock (particularly the Beatles), and watching improv comedy.

The Writers’ Lens is about "Bringing fiction into focus." What brings your writing into focus-- the characters, the stories, the love of words? The characters. They're the ones talking in my head, dreaming up new adventures and drawing me back to the keyboard.

How do you find time to write and do a demanding job? I have a full-time job as a lab tech, and I'm also the mom to a six-year-old boy, so it's very hard to find time to write. I write on my lunch hour at work and after my son goes to bed. Sometimes, I'll print out a couple of pages from my WIP and write by hand when we go somewhere. It's not as much writing time as I'd like, but it adds up over time.

What inspired your latest book? Twinned Universes is the sequel to Lyon's Legacy, which was in turn inspired by a story about hearing the Beatles play in the Cavern in Liverpool. I wanted to put a science fiction twist on the story, so I came up with the idea of sending the descendant of a famous musician, Sean Lyon, back in time to clone him. Twinned Universes is the story of Paul, the clone of Sean Lyon, who's just learned who he is. Although Paul also travels back in time to meet Sean, he also wants find out what happened to his mother and save Sean from being murdered.

Would you share a bit about your next project? Although I have more adventures planned for Paul and his friends, I'm currently working on a prequel to a fantasy series called the Season Avatars. The prequel is called Season's Beginning, and it's about the origin of the Season Avatars, a group of magicians who protect their country from a magical storm called Chaos Season. 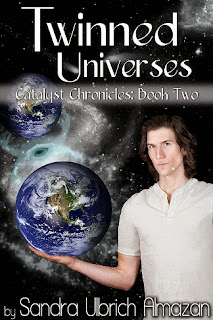 In the aftermath of a family tragedy on 21st century Earth, Paul discovers he’s the clone of Sean Lyon, his great-great-grandfather and a famous TwenCen musician. Suspecting his mother’s death was no accident, Paul comes up with a plan to trick the answers out of the great-uncle who had him cloned. But in order to make his plan work, Paul needs help from Sean himself—and Sean’s time is running out in the TwenCen universe next door. Although Paul’s family lives on the spaceship that travels between the universes, he’s never been allowed on TwenCen Earth. Now, with the help of his friends, his disguise-creating holoprojectors, and a quantum quirk, Paul must make his way to Sean while evading other time travelers who fear he’ll change the history of the TwenCen universe. If Paul is to achieve justice, he must not only risk his own life, but the wormhole connecting the universes. “To be or not to be” was a simple question in comparison....

This is T.W. Fendley. You can find out more about me and my books at www.twfendley.com. Thanks for reading and commenting on The Writers' Lens.
Posted by T.W. Fendley at 7:36 AM