Three Thoughts About… Swords and Swordfights 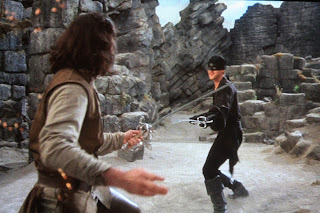 Three Thoughts About… Swords and Swordfights
By Brad R. Cook

Every book has one… don’t they? Every book should have at least one, it’s a sword, and swords are awesome. And if you have a sword, more than likely one of the characters is going to want to fight with it. Here are a few tips on swords, and how to use them.

A short bio about me, first, almost every book I’ve ever written has had a sword. Not that having them in books qualifies me or anything. I started swinging them when I first picked up a lightsaber years ago, but I officially started at thirteen when I learned to fence. I’ve never set down my sword, and today, I even give workshops on sword-fighting. I’ve studied many forms and styles from medieval broadswords to the katana, from sabers and rapiers, to great swords and the gladius.

Three things to remember about the weapon itself:
1 – Different types of swords are used in different ways
A rapier is a thrusting sword, the point is to drive the tip into the opponent, whereas a katana is slashing weapon and the goal is to slice through the opponent. The way a warrior holds the sword, they way they stand and move will be different for each weapon. If you have a Musketeer slicing through the limbs of all the Cardinal’s men, I will write an angry letter.

2 – When a sword hits another sword it dulls the blade
Hollywood has given us the classic image of two swordmasters clashing in combat. Swords flying about making whooshing sounds and clanking in a flurry of strikes – but I love Errol Flynn movies too. Reality is a little different. In real life when one blade strikes another it nicks the blade, dulling the edge, and gouging metal out of the sword. Some blades have thicker duller areas along the blade for parrying; other styles of sword fighting put an emphasis on not hitting the blade but finding an opening in the opponent’s defense. Just know that a swordsman might have to get a new sword, or at least get his sword sharpened after major battles.

3 – Swords are made in different ways
Some swords are poured, as liquid metal is fed into a mold, and once cooled the mold is broken open to reveal the sword. Some swords are hammered, as a piece of steel is drawn out to a certain length and sharpened. Some are truly forged, a certain level of carbon is added, the steel is folded to gain strength, and then hammered to a certain length and quenched in water or oil. Some swords are flexible, bending and snapping back into place. Others are rigid and designed to punch through armor. Knowing how a sword was made will give insight on how it can be used, how it will act in a fight. 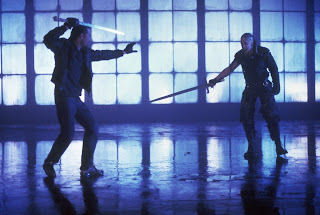 1 – The terrain or setting is an important as the swords
Where a sword fight is set has such an influence on the way a duel unfolds. One of the things I loved about Highlander, the movies and the TV show was the varying locations they used for their duels. Uneven terrain means the fighters will have to watch their footing; high ground becomes important to the style of fight used. A long corridor will prevent circling an opponent, whereas an open courtyard will give warriors a chance to move around. Think about where you set a sword fight, and make it part of the scene. Let the location be a character in the scene. 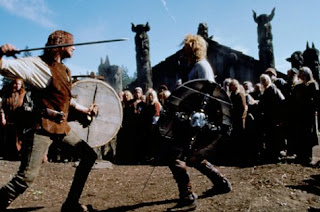 2 – Sword fights don’t last that long, and have little dialog
I love The Princess Bride, the duel between Inigo and the Man in Black is one of the best sword fights in cinema. But, it’s kind of long especially for a guy who just scaled a cliff, and they talk through the whole thing. I’m not saying people don’t talk but as a friend of mine often demonstrates, try having a conversation while running at top speed. Sword fights are very physical and stressful events. Wit is usually for before the fight to psyche out an opponent. Sword fights take concentration and focus. Because they are so physical, and because swords can dull or break in a fight, they tend not to last for hours. A fencing match is five minutes long. There is a Japanese art that focuses on killing from the draw. I’ve always liked the duel in The 13th Warrior, it is brutal, several shields are destroyed, the talking is in the lull of the fight, and the whole scene is only a few minutes long – it has a great ending too. 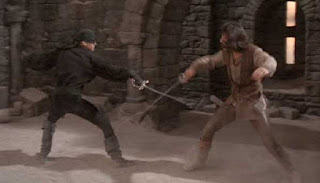 For writers who find themselves crafting a duel, I give this piece of advice – focus on finding the openings. Every duel is a waiting game. Every strike, slash, and thrust is a way to pull the opponents sword away to create an opening in their defense. Once an opening is spotted the hero can thrust or slice, making contact and ending the duel. Battering through an opponent’s defense is certainly a strategy, but I guarantee in doing so the aggressor is leaving a weak spot in their defense that can be exploited. In fencing or dueling often a point is scored, or first blood is drawn, by feigning a thrust to one side, drawing the opponent’s sword over to parry. Then dropping the blade, slipping over to another line, and driving the blade through their defense and into the opponent’s chest. Don’t focus on beating through the other sword, but finding an opening and using it to gain victory.

I hope these tips help with the next sword fight you find yourself writing.

Brad R. Cook, author of the YA steampunk series, The Iron Chronicles. Iron Horsemen - http://www.amazon.com/Iron-Horsemen-The-Chronicles/dp/0989207951 and Iron Zulu - http://www.amazon.com/Iron-Zulu-Book-Two-Chronicles/dp/0989207978.  He currently serves as Historian of St. Louis Writers Guild after three and half years as its President. Learn more at www.bradrcook.com, on Twitter @bradrcook https://twitter.com/bradrcook, or on his blog Thoughts from Midnight on tumblr http://bradrcook.tumblr.com/
Posted by Brad R. Cook at 11:35 AM