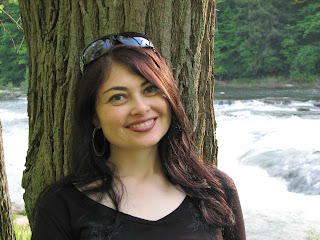 I'm very pleased to welcome Heidi Ruby Miller, who's been putting too much sex in her Science Fiction since 2005 because she believes the relationship is as important as the adventure. She loves high-heeled shoes, action movies, Chanel, loud music, and video games.

Heidi also teaches creative writing at Seton Hill University, where she graduated from their renowned Writing Popular Fiction Graduate Program the same month she appeared on Who Wants to Be a Millionaire. The writing guide Many Genres, One Craft, which she co-edited with Michael A. Arnzen, is based on the Seton Hill program and her novel Ambasadora was her thesis there.

She has had various fiction and non-fiction publications, as well as various jobs, including contract archaeologist, foreign currency exchanger at Walt Disney World, foreign language teacher, and educational marketing director for a Frank Lloyd Wright house.

Heidi is a member of The Authors Guild, Pennwriters, Broad Universe, SFR Brigade, and Science Fiction Poetry Association (SFPA). You can read her author interview series at http://heidirubymiller.blogspot.com.
She lives near Pittsburgh with her writer husband, Jason Jack Miller.


How did you learn to write romance? I started by reading romances in high school, then had the fortunate experience to attend workshops and critique sessions with successful romance writers in Seton Hill University's Writing Popular Fiction graduate program.

Although, while I was at Seton Hill I worked more with the Science Fiction writers. It wasn't until a few semesters in that I realized I was writing SF Romance.

What key things make your romance work? One of the themes of my stories is always strength through a lover. Knowing there is one person in the entire universe that you are close to in so many ways, and it is that one person who would do anything to protect you, to make sure you're happy, to fight for you and love you. Add in a life and death situation and suddenly you're testing that strength. What could be more romantic?

On the technical side, I tend to make my love scenes sensual and the characters often think about each other and the relationship. I'm not a big fan of having them at each other's throats constantly, but rather working together against a common enemy. Which of your books did you write first (GREENSHIFT or AMBASADORA)? I wrote AMBASADORA first, but knew the backstory for the secondary characters of David and Mari so well that I decided theirs was worth telling in a separate book, so I wrote GREENSHIFT .

We have a signature question for all our guests: The Writers’ Lens is about "Bringing fiction into focus"–what brings your writing into focus, the characters, the stories, the love of words? My husband (author Jason Jack Miller) brings my writing into focus. He's my sounding board, my first reader, my cohort in plotting. He knows my world and my characters inside and out, so much so that he'll tell me when he doesn't think a character would do something I'm considering.
I also daydream constantly. Between these fantasies in my head during the day and the ones that come out in my dreams at night, I have endless stories. I never suffer from writer's block.

Would you share a bit about your next project? I'm working on two more books in the AMBASADORA-verse. One is STARRIE, which continues right after GREENSHIFT with David's brother Ben and runs concurrent with the events in AMBASADORA. The other one, FRAGGER, is book two of the main arc and picks up right after AMBASADORA ends.

I also have a thriller I'm revising titled ATOMIC ZION, which has a paranormal/science fiction romance element to it. It is also the beginning of a new series and I hope to see it released this year or next.

What's the highest compliment someone could make about your writing? That they fell in love with my characters. I dwell on character behavior and motivations until I make myself crazy: Would Sara really trust Rainer after this happened? Or, Does David know enough about what's going on here to make a decision? Or, Why would Sean say that to her? Etc., etc. I have extensive character sketches and backgrounds for all of them—which is where GREENSHIFT and STARRIE both started!
If you could borrow one person’s zest for writing and/or life, whose and why? I have a little article posted at my work station about actor Will Smith from an Entertainment Weekly a few years ago. In it he was asked why he thought he was so successful. His answer? He had inherited an insane work ethic from his family. He built his career on hard work and smart decisions.

That really resonated with me because I don't know of any people who work harder than my parents and brother. And not just at their jobs, but in every aspect of their lives—hobbies, the house, helping others. I was taught early on that if you work hard enough, you'll achieve your goals. As I've gotten older, I admit to my dismay that there is a certain amount of cosmic luck or a randomness that no amount of work can overcome, but you adapt.

I'm fond of the Qui-Gon Jinn philosophy of life: "Your focus determines your reality." Because it really does, for good or for bad, whether the outcome is what you expected or not, so why not focus on something good and productive?

What tune/music could be the theme song for your book? Each book has different artists and songs that I associate with it, probably because I set Spotify to repeat songs over and over again as I'm writing. It keeps me in the mood of the story and the repetitive nature is similar to what both Paul Bowles and Jorge Luis Borges both said about eating the same food every day and working in the same space until a story is finished. It puts you into a trance of sorts.

For AMBASADORA , I listened to a lot of Linkin Park, System of a Down, and Red Hot Chili Peppers. So maybe "Papercut" by Linkin Park would best sum up Sara's journey because of talking about "the face beneath the skin," which could literally be her bio-lights, the living intra-tattoo which marks her as an ambasadora, but also how she's trying to hide her intentions, her true face, from everyone.

For GREENSHIFT , I went a little lighter with Lady Gaga, Adele, and the soundtrack from Suckerpunch, with a little Disturbed drifting in on occasion. I'd say "Poker Face" by Gaga because Mari is much more than she seems.

GIVEAWAY REMINDER: Heidi is offering ebooks of both GREENSHIFT and AMBASADORA. To enter the contest, leave a question or comment before midnight, Saturday, Feb. 25.
Posted by T.W. Fendley at 1:50 PM