Thom's the author of THE EMPTY, DEAD MAN’S FIRE, THE DEMON BAQASH, 13 BODIES: SEVEN TALES OF MURDER AND MADNESS, and the upcoming release, CHASING KELVIN. He was the sole writer and co-producer of the weekly audio drama radio program, 21ST CENTURY AUDIO THEATER. Fourteen of these dramas have since been published in four collections. A native of the Chicago area, Thom currently makes his home in Las Vegas. 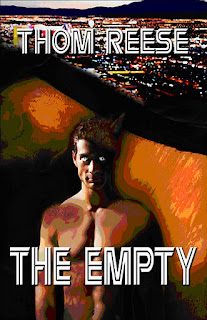 Can a race of savage beings win their struggle to exist in mainstream society?
The reyaqc, a people who have no inherent characteristics of their own, survive by infusing genetic information from humans and animals alike, often leaving the donors hollow, vacant shells. They’ve been with us for centuries. Many live in isolated communities on the fringes of society. Others walk the cities of the world, unable to reveal their true natures for risk of discovery. Donald Baker is a reyaqc and he fears for his people. For with the rising human population and technological advances, the reyaqc can no longer live undetected. His life-long desire is to bring his race into the mainstream of society. But now a lone rogue terrorizing the city of Las Vegas threatens to expose the reyaqc prematurely. As the death toll rises, Donald must battle not only the rogue, but his own savage nature.


The Writers’ Lens is about Bringing fiction into focus. What brings your writing into focus--the characters, the stories, the love of words? All elements are important, but to me it always comes back to the characters. A book can have a fantastic plot, with twists, and reversals, suspense, and heartbreak, but if the reader hasn’t connected with the characters these means nothing. First, give me someone to cheer for, then put that character into difficult situations of any kind and I’m on board. Plot is very important, but it’s the characters making their ways through the plot that keeps the reader moving from page to page.

What makes your book/characters unique? My most recent release, THE EMPTY, is unique–I hope–in concept. It deals with a race of people with an insufficient genetic matrix. In order to survive they must infuse DNA from others. They are human in form, and all infuse from humans, but some take genetic material from animals as well. Many live and function within human society, while others live on the fringe of civilization in animal-like packs.

As to the characters, my goal is to make them as human as possible–even my non-human characters–to give them realistic motivations and struggles. The setting and situations might be science fiction or horror, but the inner struggles of those involved should be the same as those we all, as humans, deal with in life. In my first novel, THE DEMON BAQASH, I utilize the journals of the demon. Through those journals, the reader sees the demon’s struggles and conflicts, and though this is an evil spirit, I sought to make him the most human character in the book. Writing these passages was interesting and challenging. It took me to some very peculiar places emotionally.

What inspired your latest book? I’m not sure that I can pinpoint the exact inspiration for THE EMPTY. Part of it came from the thought that all of us are chameleons. We change to our environment. We put on a new skin year by year as we hit different life stages, but also, some people more than others, do so hour by hour as we connect with different individuals. The Thom Reese at home with my family is not necessarily the same as the Thom Reese in a work setting. It also comes from the idea that at some level we are all empty. Well, maybe not empty, but not full either. Incomplete. Very few people are satisfied with every area of life, with every decision, with every emotion. Sometimes we’d like to see what it’s like to put on another skin, to see life through a different lens. Add this together with my sci-fi/horror take on fiction and we have the core of THE EMPTY. Once the concept was in place, the ideas cascaded and soon I had an entire mythology surrounding this peculiar race.

What do you think readers will like about your book? THE EMPTY treads the thin line between science fiction and horror, and so I believe readers of either genre will find it appealing. I can never speak for others, and obviously I’m biased where my own work is concerned, but I find the concept compelling. It feels fresh to me. And, as always, it comes down to the characters. I follow the life of Dolnaraq (Dol-nar-aq), a particular reyaqc (aka, Empty), from his childhood in the late 1800s through the present day. Reyaqc live about fifty percent longer than do humans and so he is now in the latter years of life. Through his long existence I am able to tell the tale of the reyaqc species while setting the story in numerous exciting locales: the Siberian wilderness, pre-WWI Germany, New York of the early 1900s, and present day Paris and Las Vegas. Dolnaraq goes through many changes, both philosophically and physically, and is thrust into horrible situations which could lead even to the extinction of his species. There are key human characters as well. A physician, Julia Chambers, in particular, who is drawn unwittingly into the world of the reyaqc, and is confronted with both moral and physical dilemmas. Plenty of tension, thrills, exotic backdrops, and surprises.

Would you share a bit about your next project? My next release, CHASING KELVIN, is the second in my Marc Huntington series. The first was DEAD MAN’S FIRE, released this past September. The series follows the adventures of recovery specialists, Marc and Dana Huntington, as they travel the globe recovering lost and stolen possessions and missing persons. In CHASING KELVIN, they land in the midst of a terrorist attack while recovering a stolen diamond. There’s plenty of twists and turns, a love triangle, real danger to the primary characters, and an ending that I doubt few will anticipate. I’ve just put the finishing touches on it.
What's your favorite way to interact with fans/readers? I love interacting with people face-to-face, having that give and take, and getting a feel for a person. For that reason, I would say that book signings and conventions are my favorite places to interact with readers. That said, I have access to far more readers, and they with me, through social media. I use Facebook daily, and have met so many readers and book lovers there. It’s the largest social media site, and so makes me the most accessible. I invite any book lover to friend me there. Even if you haven’t read one of my books. I’m a reader too. I love talking about a wide variety of books.

How much fact is in your fiction? The short answer is, enough to make the story believable, but not so much as to bog down the pacing. As to the long answer, my goal is to get the facts right. As a reader I find it irksome when something with which I have experience is presented inaccurately. It causes a break in the reality of the story. My books tend to have science fiction/horror/fantasy elements. As such, there is already a break with reality. My goal is to present a believable premise within the context of this artificial reality. In THE EMPTY, characters speculate on how a species with insufficient genetic information could survive. Theories are tossed about. I use real science as the basis of these theories and then take the leap to “what if this were to happen.” By nature, I’m a storyteller, not a researcher. But part of telling a great story is doing sufficient research to allow the reader to suspend disbelief and engage in the story.

If you could meet one of your characters, who would it be and where would you meet? Dolnaraq from THE EMPTY. He is both a savage and an intellect. He’s creepy yet endearing. He can be ruthless, but has a strong moral compass. I doubt I would like him as one likes a friend, but I would find him fascinating and full of insight and knowledge. As to where we’d meet, Dolnaraq would likely choose his study. I would pick a pizza joint.

What movie stars would be perfect for Dolnaraq and Julia? Why? I’ve never really pictured an actor for the role, but I suppose Anthony Hopkins for the older Dolnaraq. He has such a subtle power and authority about him. For the younger Dolnaraq, I’m not sure, perhaps Matt Damon. He doesn’t look like Hopkins, but as the reyaqc are constantly infusing DNA from different sources, their appearance is in constant flux. Damon, I think would bring the needed intensity to the role. As for Julia, probably Halle Berry because of her quiet poise.

Find out more about Thom and his work at:
His blog: Through Thom Tinted Lenses
THE EMPTY
THE DEMON BAQASH
DEAD MAN’S FIRE