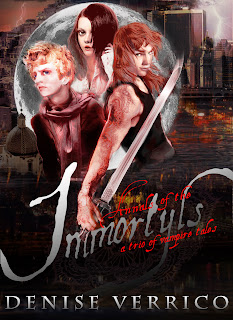 This week's giveaway is Denise Verrico's ANNALS OF THE IMMORTYLS, a trio of dark urban fantasy tales featuring characters from her Immortyl Revolution series.


HOW DO YOU WIN A FREE COPY OF ANNALS OF THE IMMORTYLS?  To enter the contest, simply leave a comment or question on the Writers' Lens between now (July 23) and midnight July 28, 2012. Please include your email so we can reach you if you win. The more comments you leave, the greater your chance of winning the contest. If you refer others to The Writer's Lens who mention your name in their comments, I'll enter your name again in our random number generator along with theirs, also increasing your chances at winning! Good luck and comment often!

For excerpts of the Immortyl Revolution Series, character profiles and the Immortyl Lexicon visit www.deniseverricowriter.webs.com

For insider information on the series visit www.ImmortylRevolution.blogspot.com