Today I'm very pleased to welcome Joe Prentis, who I met through our publisher, L&L Dreamspell. His latest book, INNOCENT, is in his Sheriff Daniel Barrett series. He also wrote The Renegade series, Abraham's Bones series, and more!

JOE: Books have always been an important part of my life, and I continue to be fascinated by the many wonderful things I discover each time I open a book. When I was growing up, we moved frequently, living in cities, as well as in small towns, and on a working farm in a rural area. The sharp contrast of each of these places caused me to appreciate the busy and varied experience cities had to offer, but also the quiet life of being close to nature in the countryside. I was impressed early on by the vast differences between the geographic areas of the country, and the part ethnic backgrounds, social differences, and education played in the lives of people. Books about history, science, romance, mystery and suspense, have always presented an irresistible attraction to me. Writing is my way of introducing others to the things I have observed and experienced. I now live in a small village in the South. I have written ten novels and over seventy short stories. I am now writing full time and loving every minute of it. http://www.joeprentiswebsite.com

The Writers’ Lens is about "Bringing fiction into focus." What brings your writing into focus--the characters, the stories, the love of words? I write character-driven fiction as opposed to plot-driven. In character-driven fiction, the story is carried along by the characters as they are impacted by the events in the plot. I start any writing project with a general idea of where I want to go with the story, and then populate the world I create with my characters. The plot might begin with a situation like a foreign agent working in the White House. Questions immediately start to flow through my mind regarding how the spy got there, and what does he want. The ‘what does he/she want’ is the single most evocative question any writer can ask. I don’t like fiction where the characters seem to be constructed of cardboard. Real people seem real to us because they are complex. I try to create a reality where each character has the same virtues and flaws as the real people I know. As several writers have pointed out, each sentence must either advance the plot, or show something about the character. These two elements working together can produce a great story.

What inspired your latest book? My latest book is nearing completion. It is the second book in the Sheriff Daniel Barrett series. Several incidents in the news brought about a discussion between me and three other friends on a forum. As the discussion evolved over several weeks, I learned that all three of the women were clinical psychologist. We discussed sexual abuse and the growing problem in our society. They urged me to write a novel about the things we had discussed. A lot of the material in Innocent is things taken from the real world, but it also deals with the victim’s reaction, and the aftermath of the situation. The second book in the series, which is almost finished, continues with the same theme. It deals with love, hate, anger and family values. My characters are not perfect people, and their flaws create a wonderful (and sometimes, not so wonderful) series of events.

What makes your book/characters unique? I am a devoted fan of romance writer LaVyrle Spencer. I have learned from reading all of her novels that you don’t have to write about world-shattering events to create nail-biting suspense. Spencer usually writes about very simple situations. It might be a divorce and the agony of a parent being separated from his or her children. The situation always works because everything is true to life. Certain types of people gravitate toward certain occupations or social situations. What I am suggesting is not stereotyping, but reality. I am an observer of humanity and what makes them tick. If characters are real enough to the reader, it will create an OMG moment where the reader will know what is likely to happen as soon as the scene starts. There need to be some surprises along the way, and I like to include them too.

What are your top three reasons for writing? I have more than three reasons for writing, but here are three of them. Someone said that a real writer writes because he cannot prevent himself from doing so. There are many who want to be a writer rather than being compelled to write. I am thoroughly convinced that the real writers among us are born and not created in some creative writing class.

My second reason for writing is to bring pleasure to my readers. I don’t think there is any greater calling than to entertain. One of the first occupations was traveling storytellers who went from hamlet to hamlet telling stories. I was in a doctor’s office once and had brought along a print edition of one of my novels, intending to scan through it as I planned the next book in the series. When I checked in and returned to my seat, a young woman had taken my book and was reading it. Rather than asking for the book back, I spent the next thirty minutes watching her read. Her mouth moved occasionally, but it was her eyes that caught my attention. Sometimes they narrowed thoughtfully, and at others, they were wide open with delight. I try to hold that memory in my mind as I write and revise.

My third reason is to inspire. We are all capable of being much more than we are, and we can improve by reading how others handle various challenges. There are a lot of boys and girls who started their journey toward adulthood from within the pages of a book. I hope there are those who read things I have written and decide to meet those challenges head-on. A book is a dream, a fantasy, a challenge. . .

I would like to think that some of the things I have written have made someone reach out in a positive way. 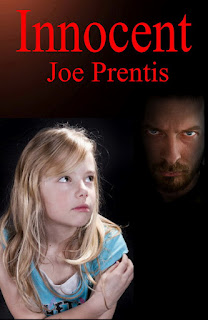 A phone call in the early hours of the morning shatters the tranquility of Sheriff Daniel Barrett’s household when he finds out that the stepfather of his daughter’s best friend has been the victim of a brutal homicide. Viewing the body at the scene of the crime convinces Barrett that there is a monster loose in their town, and the deranged killer is poised to strike again. Barrett is in a race against time with a lab full of evidence that seems to lead nowhere, and a growing suspicion that everything is more complicated than it seems.

Books available at:
http://www.joeprentiswebsite.com
http://www.amazon.com/Joe-Prentis/e/B006GPO1YY
Posted by T.W. Fendley at 1:00 AM