An Opportunity to Encourage Tomorrow's Writers! 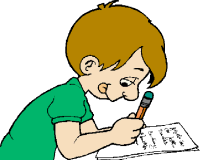 An Opportunity to Encourage Tomorrow’s Writers!


We all began the same way, a young kid whose imagination far exceeded those of ordinary people. We all found inspiration within the words of the books imparted to us by those who most wanted to affect our futures. Then by some strange magical force we started to string those words together and weave them into stories that amazed the parents and grandparents.


Okay, maybe I’m over-selling it a little, but we all did start writing when we were kids. It’s a common thread I find in most writers. Now, those scribblings may not have been the next literary novel destined to change the world, but it was a start.


Most writers I know have that teacher or professor who made them write more than just a book report, for me, it was Mrs. Goldman, my elementary school Creative Writing Teacher.


Contests can be a great way to foster this creative energy and St. Louis Writers Guild has a long tradition of encouraging young writers. Their first contest for kids started in the 1930’s and they continued through the decades, just a few years ago they held The Big Write, part of the Big Read Festival. When the festival ended, St. Louis Writers Guild was without a kids writing contest, and so they created…


The contest has two categories, one for kids in fourth and fifth grades and a second for kids in sixth through eighth grades. There are six cash prizes in each category! $50 for First Place, $30 for Second Place, $20 for Third Place, and Three Honorable Mentions each receive $10!


Young writers are asked to write an original story of under 500 words that begins with the sentence, My new phone came with a strange app that...


There is no fee to enter.


Every story must be accompanied by an Official Entry Form. You can find the Rules, Submission Guidelines, and the official entry form on the SLWG website, or I have posted the official form on my website!


Please help us spread the word to every young writer, parent, or teacher across the world. The St. Louis Writers Guild's Young Writers Awards are a new tradition, one that will hopefully last as long as their other contests. The short story contest is almost a century old and the current poetry contest has been held every spring since the mid-1990’s.


If you happen to be in St. Louis this month, there will be a workshop about the contest at Writers in the Park. Beyond having breakout sessions for adults, this year they will have four hours of workshops for young writers in fourth through eighth grades. The day starts with award-winning children’s author Kate Klise, and then continues with children’s authors Jody Feldman and Faye Adams. Attend all the workshops or just stop by for awhile; either way will hopefully inspire that young writer to be tomorrow’s award-winning novelist!


Free and Open to All!