I met fellow L&L Dreamspell author Jo Hiestand last year at a book signing event in O'Fallon and have since had the pleasure of doing several signings with her and mystery writer Judy Moresi. I hope you enjoy learning about Jo and her work--I know I have. This Southern girl's even learned how to pronounce Derbyshire (who knew?). 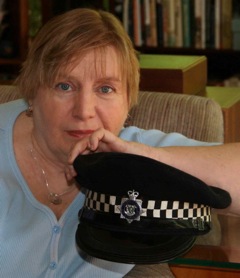 A month-long trip to England during her college years introduced Jo to the joys of Things British. Since then, she has been lured back nearly a dozen times, and lived there during her professional folksinging stint. This intimate knowledge of Britain forms the backbone of both the Taylor & Graham mysteries and the McLaren cold case mystery series.

Jo’s insistence for accuracy--from police methods and location layout to the general “feel” of the area--has driven her innumerable times to Derbyshire for research.  These explorations and conferences with police friends provide the detail filling the books.

In 1999 Jo returned to Webster University to major in English.  She graduated in 2001 with a BA degree and departmental honors.

Her three cats--Chaucer, Dickens and Tennyson--share her St. Louis home. 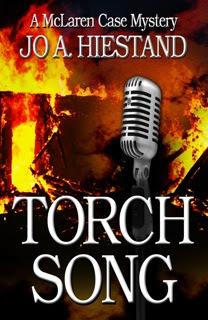 TORCH SONG:
"With hints of the 1940s movie Laura, Michael McLaren is drawn with haunting music into the intricate path of attraction for a dead woman.  It is easy to get caught up in the wonderful descriptions written by author Jo Hiestand, and then suddenly realize she just gave us a clue.  Jo leads us along, following twists and turns, making us guess who the murderer is.  I was so sure I knew who did it, and in the end, I was so wrong!  Torch Song is an excellent mystery and well worth reading.”
-- Ann Collins, Librarian, Webster Groves Public Library

The Writers’ Lens is about "Bringing fiction into focus." What brings your writing into focus-- the characters, the stories, the love of words? That's easily answered: the characters.  I start off with characters.  This is especially true in my Taylor & Graham mystery series.  Each book uses a different British custom as the backbone of the plot.  When I decide on a custom, I figure out who would be involved with that custom.  For instance, "A Well Dressed Corpse" showcases the custom of well dressing.  So who would be involved with that?  There'd be villagers to make the well dressing panels,  an event coordinator, the daughter of the coordinator who's an aspiring singer, a rival village's event coordinator, the village vicar, the jealous wife of the event coordinator, last year's event queen...  You get the idea.  So all the characters have a legitimate reason for existing and act true to their role in the custom.  I believe if you create the plot first, you run the risk of having wooden characters who may do anything simply to make the story work.  This creates unbelievable actions, motives and characters.  If you create your people first to give them a purpose, they will leap off your page with life.

What inspired your latest book? My book "False Step" comes out in October.  Since it's one of the Taylor & Graham mysteries, and therefore needs a British custom for the plot, I researched and discovered rapper dancing.  No, not "Hey, dude, you lookin' cool."  Rapper, as in rapper sword.  It's an 18-24" flexible steel blade, handles on both ends, so that you and the dancer next to you can each hold a handle.  It's danced by five to nine people.  They weave intricate knots with the rappers.  This is done by the dancers physically changing places and going over, under, around each other, like a Celtic knot.  I was very intrigued with the dance, saw it on YouTube, but had a lot of questions.  So I emailed the director and musician of a group near Derbyshire, which is where my series is set.  He answered my questions and I stayed with him last September when I returned to Derbyshire for a book signing.  The dance troupe performed and they chose their own characters' names for the book.  It was a lot of fun to research and my jaw still drops when I see the videos of the dances online.  Check out the Newcastle Kingsmen video on http://www.rapper.org.uk/video/   if you're not familiar with the rapper sword dance.  The group I saw in England, who became fictional characters in "False Step," are an all girl group, the Maltby  Phoenix Sword Dancers.  So the rapper sword dance custom intrigued me and inspired my latest novel.

Would you share a bit about your next project? I'm just finishing up "Hit Song," which is the fourth book in my McLaren mystery series.  Michael McLaren is an ex-cop who left his job due to a terrible injustice.  He now repairs dry stone walls in Derbyshire and investigates cold cases on his own.  "Hit Song" deals with the death of a university art student one year ago and a man, John Pooley, suspected of killing her.  Due to lack of evidence, he is released by the police.  But that doesn't stop public opinion from mentally trying and symbolically hanging John.  When he conveniently dies, the case seems to die with him, except that the local radio shock jock stirs the cold case embers to inflame citizen outrage on the one year anniversary of the girl's death.  The exciting thing, to me, about this book is that it's the third book that will have an original song that goes with it.  Two local university music students arranged my lyrics (set to a traditional Scottish folk song tune) and recorded it.  It's available on CD.

However, for "Torch Song," the book prior to "Hit Song," there's a completely original song.  Lola Hennicke, a university music student and professional blues singer, wrote an original melody to my lyrics.  She and her acoustic band recorded the song in a 1940s torch song style, and the CD is selling well.  That was so much fun that when "Hit Song" came into being I went back to the university for the two current students, Hannah Satterwhite and Nick Pence.  This song is in the folk music style.  I love the idea of having original music as a companion piece to the McLaren books.  Since the books have music references already running through the story, this just seemed a natural addition.  The victims in the stories seemed so alive to me, their music seemed so deserving of being heard, that I came up with this CD idea.  I think it brings the reader closer to the characters and makes them come alive.  How cool is that to "hear the victim singing"!

Name a book that you wish had a sequel (or another sequel) and what kind of story you think that literary remix would tell. I absolutely love "Daughter of Time," by Josephine Tey.  Her detective, Alan Grant, is in hospital, recuperating.  He tackles a historical "mystery" to solve from his bed, giving him something to do.  He starts with a portrait of Richard III and does research into Richard, the princes in the tower, and the Tutors.  I love how Tey slowly gives the reader the history of Richard and the princes and their mysterious death, and comes to the conclusion that Richard is not the monster Tutor history has painted him.  If Tey could've written a sequel, I'd have liked her to take on another historical mystery, perhaps what happened to Charles I's royal jewels.  Or the identity of the man in the iron mask.  Or the death -- actual or faked -- of Christopher Marlowe and the schemes and implications of that faked death.

What's the highest compliment someone could make about your writing? I'm thrilled if a reader tells me she felt as though she were in the scene, that she smelled the forest or saw the interior of the church or felt the rain fall down her neck...or whatever place or action I describe.  It's a huge compliment when the person says "I really feel I'm there." Then I know I've successfully conveyed my impression of the scene to her.
Posted by T.W. Fendley at 1:00 AM