Writers in the Park - A Free Festival for Writers

Writers in the Park – A free festival for writers
By Brad R. Cook


For three years, I have coordinated St. Louis Writers Guild’s mini-conference, Writers in the Park. The festival was created to celebrate SLWG’s Ninetieth Anniversary and provide the electric feeling that comes from a writers’ conference.


If you haven’t gone to a writing conference, I highly recommend it. Breakout sessions presented by industry professionals, pitch sessions and panels with agents, nightcaps, tons of inspired writers, and a packed schedule of classes that you haven’t seen since high school. The creative energy that gets whipped up makes most of the attendees scurry off to begin furiously writing.


I wrote half a novel once just from the nervous energy created by the anticipation before the writers’ conference and the creative fervor I felt afterward.


St. Louis Writers Guild may not have been able to bottle that feeling but we came close – we created a mini-conference. So what is a writing mini-conference? Well, Missouri Writers Guild, Writers Digest, Backspace, numerous literary groups, and universities offer wonderful writers conferences that last from a weekend to weeks. They are packed with hundreds of writers, great authors, literary agents, editors, publishers, and the icons of the publishing industry. If those are the big leagues for conferences then Writers in the Park is more like the minors. A mini-conference is a single day event. We still have the industry professionals, but no agents, and no hotel bills. 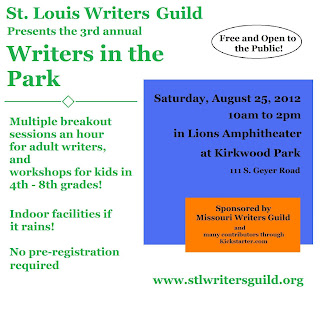 
Free and open to the public!


There will be multiple breakout sessions an hour for adults, plus books for sale and great food. It’s a festival to celebrate writing. The workshops and this year St. Louis Writers Guild has brought together many of this city’s literary organizations as well as great authors to provide workshops covering a wide variety of topics for writers of every level. The day begins at 10:00am at Lions Amphitheater in Kirkwood Park


Participants may show up at anytime during the festival.


There will be indoor facilities if it is raining, so the day will go no matter the weather!


This event was sponsored by the Missouri Writers Guild and many contributors to the Kickstarter Campaign for Writers in the Park.
Thank you as well to StLBooks.com and Six North Cafe

Allow me to highlight the great authors and literary organizations who will be speaking at Writers in the Park.


Kate Klise
Kate Klise is an award-winning author of 23 books, including the bestselling Regarding the Fountain, Dying to Meet You, and Stand Straight, Ella Kate, a Missouri Show-Me nominee. In addition to writing books, Kate spent fifteen years working as a correspondent for People magazine. Given her experience as both a journalist and a novelist, Kate knows the challenge of getting a story down on paper. She delights in sharing her tricks and techniques with writers of all ages. A native of Illinois and a graduate of Marquette University, Kate now lives and writes on forty acres in the Missouri Ozarks. For more information, visit www.kateklise.com.


Shawntelle Madison – MORWA, the Missouri Chapter of Romance Writers of America
Shawntelle Madison is a web developer who loves to weave words as well as code. She’d never admit it, but if asked she’d say she covets and collects source code. After losing her first summer job detassling corn, Shawntelle performed various jobs—from fast-food clerk to grunt programmer to university webmaster. Writing eccentric characters is her most favorite job of them all. On any particular day when she’s not surgically attached to her computer, she can be found watching cheesy horror movies or the latest action-packed anime. She lives in Missouri with her husband and children.


Jeannie Lin – MORWA, the Missouri Chapter of Romance Writers of America
Jeannie Lin grew up fascinated with stories of Western epic fantasy and Eastern martial arts adventures. When her best friend introduced her to romance novels in middle school, the stage was set. Jeannie started writing her first romance while working as a high school science teacher in South Central Los Angeles. Her first three books have received starred reviews in Publishers Weekly and Library Journal and The Dragon and the Pearl was listed among Library Journal's Best Romances of 2011.


Jody Feldman
Jody Feldman may have been a natural-born reader, but has never claimed to be a natural-born writer. Through a series of fortunate events, she found herself enrolled in the University of Missouri’s School of Journalism and discovered she could write. Her credits include a television special, a travel book, speeches, all means of marketing and promotion and … back to her reading roots ... children’s novels. Her first, The Gollywhopper Games received the 2011 GrandCanyon Readers Award and the 2011 Georgia Children's Book Award among other honors. Her second, The Seventh Level debuted on the Summer2010 Indie Next List and received the 2011 Missouri Writers Guild Show Me Best Book Award. Jody Feldman lives right here in St. Louis where she’s always hard at work (or pretending to be hard at work) on the puzzles or mysteries or twists for her next book.


Kelly Cochran – Sisters in Crime of Greater St. Louis
Kelly Cochran’s humorous mystery, Buying Time: An Aspen Moore novel, has been described as quirky, fun, delightful, and unique. As an independent author, typing the words “The End” is when the real work begins. She is responsible for all aspects of her book from cover design and formatting to publication and marketing. With an overactive imagination and a fascination with crime, Kelly finds mystery and humor in everything she sees.


Bob Baker – St. Louis Publishers Association
Bob Baker is an author, musician, and workshop leader who is dedicated to helping creative people of all kinds get exposure, connect with fans, and increase their incomes through their artistic passions. Bob's books include "Guerrilla Music Marketing Handbook," "55 Ways to Promote & Sell Your Book on the Internet," "Unleash the Artist Within," "Guerrilla Music Marketing Online," and more. Among his many credits, he is current President of St. Louis Publishers Association a cousin organization with the Writers Guild


Margo L. Dill – Saturday Writers
Margo L. Dill is the author of Finding My Place, a middle-grade historical fiction novel set in Mississippi during the Civil War. She also has two picture books under contract: Lucy and the Red Ribbon Week Adventure (2012) and Maggie Mae, Detective Extraordinaire, and the Case of the Missing Cookies (publication date TBD). She blogs about children's, YA, and women's books at http://margodill.com/blog/ and loves speaking to groups full of readers, young and old, about books, the writing craft, and social networking/blogging. She is also a freelance editor and edits for WOW! Women On Writing e-zine and High Hill Press as well as individual clients. Find out more at: http://www.margodill.com.

Ben Moeller-Gaa – St. Louis Poetry Center
Ben Moeller-Gaa is a haiku poet and a playwright living in St. Louis. His haiku have appeared in five countries on four continents and in two languages. His haiku has recently been published in A Hundred Gourds, Notes From the Gean, Multiverses, and Frogpond and he has a haiku chapbook, Wasp Shadows, due out later this year from Folded Word Press. Ben's plays have been performed on several small stages in the St. Louis area. His play Digging Up Danny will be performed later this year at the Black Cat Theater in Maplewood by Panther Productions. Ben is a Contributing Editor to River Styx, a member of The Haiku Foundation, has a degree in English Writing from Knox College, works for Sigma-Aldrich and can be seen in Wicked Pixel films.

Faye Adams – Writers Society of Jefferson County
Faye Adams is a children’s author and former Senior Poet Laureate for Missouri. She has won numerous awards for her novels and poetry.


T.W. Fendley – St. Louis Writers Guild
T.W. Fendley is an award-winning author of historical fantasy and science fiction for adults and young adults. Her debut novel, ZERO TIME, melds ancient Maya history with New Age spirituality and time travel. Readers chose ZERO TIME as the 2011 Best Science Fiction/Fantasy Novel, and it was a finalist for the Missouri Writers' Guild's 2012 Major Works Award. Fendley’s short stories have earned national recognition, including a Writers Digest award. She began writing fiction full-time in 2007 after working more than 25 years in journalism and corporate communication. When she’s not writing, she travels with her artist husband and tries to find fun ways to use remote viewing.

David Lucas – St. Louis Writers Guild
David Alan Lucas is a writer, poet, martial artist and a prolific blogger. He has blogged interviews of emerging musical bands for "Rolling Stone" type ezines, writing techniques, self-defense, and health care law. Some of his blogs about overcoming learning disabilities have been used by professors in universities both in the United States and Great Brittan. His fiction includes Paranormal, Horror, Science Fiction, and Mystery/Crime Drama. David is a Sandan (Third Degree Black Belt) in Tracy’s Kenpo under Tim Golby and David Hofer and brings his knowledge of martial arts, physical and psychological combat to his self-defense articles and his fiction writing. David holds a Bachelors degree in Elementary Education from the University of Missouri—St. Louis and a Masters Degree in Business and Leadership from Webster University.  He is also a certified paralegal. When David is not writing he is reading, working with the community, traveling, camping, studying martial arts, or otherwise looking to get into some kind of adventure that will likely spawn other story and poetry ideas.


If you happen to be in St. Louis this weekend, stop by Kirkwood Park, and discover one of the largest literary communities in Midwest showcased in grand fashion.


Thank you to everyone who has dedicated themselves for the last few months and on that day to ensure that Writers in the Park is an amazing event.


For information on Missouri Writers Guild and its conference, visit www.missouriwritersguild.org or follow them on Twitter at @MoWritersGuild
Posted by Brad R. Cook at 2:11 PM