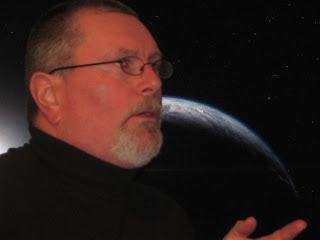 Welcome to H.C. Beckerr, author of HILL OF GREAT DARKNESS. He resides in the St. Louis area, and I met him through the St. Louis Writers Guild.
Over the past ten years, he has served as an interim pastor at a small Baptist church, an associate pastor, as well as a youth pastor in the St. Louis area, all the while working on his first Christian-based, science fiction novel.
A love for the outdoors as well as a love for mystery and the unknown things of life was fostered in his early childhood by his many visits to an archeological site not far from his home known as Cahokia Mounds. This is where the idea for his Christian-based science fiction novel was spawned, nurtured, and brought to life.
Being a man of faith and family, as well as having a love for his country, is at the epicenter of all that entails this simple mid-western man. He can be found on:

What brings your writing into focus--the characters, the stories, the love of words? Wow! That's kinda hard to pinpoint. I would love to say all of them but, that would be cheating, wouldn't it? I do find that evolving various characters throughout a storyline is one of my favorite tools, but at the same time, the story (and/or back story) has to be evolving and deepening as well to accommodate or even facilitate the maturing of the characterization. They feed on one another. And yet, at the same time, they often can be at opposition...just like real life. I love to take situations (even outlandish or unbelievable) and make them real. Okay, okay...I've beat around the bush enough, so lets go with story since it pretty much entails everything. After all, I'm a story teller.

What is your favorite writing accessory or reference? Music, music, music!!! It drowns out life around me allowing me to climb into the story. Since I am writing science fiction, a lot of times I will put in sci-fi movie soundtracks as well as classical discs. I am careful to select music without words! I don't want to start listening to the music as much as being engulfed or driven by it. Its power, its passion....almost sounds like escapism and it very well be! But, for me...it works. Along with music, one little tool I always have by my side is a book from 1921 titled Allen's Synonyms and Antonyms, a really cool help that I found buried in an antique (or as my sweetheart calls them 'junk') store way up in the Wisconsin Dells back in 2005. What a resource!!!... and a lot easier to use than a Brontosaurus...um, I mean a Tyrannosaurus...hmm, that's not it either...Thesaurus, that's it!  Yes, a lot easier to use than one of those.

How much fact is in your fiction? For Hill of Great Darkness there is a lot, I mean a whole lot, of fact in the story. In this area of the U.S. (the St. Louis area) there are legends and folklore galore! From a disappearing Indian culture to giant, winged reptiles that had a taste for human flesh. Even coming into more recent times, there are the stories and fables of coal mines, lost, even haunted, silver mines, and  the Gates of Hell themselves. This area is replete with story fodder! The Cahokia Mounds State Historic Site is the epicenter of the mysteries of this area as well as at the very center of HOGD. There was so much research of the Mounds site done in order to help make this Sci-fi, or as I like to say Chri-fi, to designate the Christian theme, a more believable, more solid story.
My goodness, I have spent days upon days at this incredible place ever since my childhood soaking in the mystery and majesty of the area. In 2005, I met extensively with one of the Mound's site managers to probe, test, and acquire every bit of knowledge that I could. And it's not just the Mound's site...it's the whole region that is involved. From Alton to the Collinsville/Caseyville area and from Scott Air Force Base to St. Louis the story unfolds and spreads out its tendrils to Huston and Tehran. Um, and that's not even mentioning the planet Saturn.
Oh! And speaking of Saturn, there was a lot of science that was researched for the ride...but I mostly twisted that....that's why it's called science- fiction! Or, you could even call it fantasy. Most of all, simply put; it's a fun ride! You know, T.W., I've read your book, Zero Time, and there are a few commonalities in our stories...really cool!

What do you think readers will like about your book? You know, I like to think of HOGD as a classic sci-fi storyline. the simple story of a brand-spankin', shiny, new spacecraft on her first real mission with a radically new test engine when (surprise!) something goes wrong. And, it's a story about tomorrow, not a hundred years from now. In fact, we're still driving Jeeps, VW's and Humvee's The year is 2037 and we're gearing up to (finally) go to Mars.. Trouble is, we pass by Mars like she's a state trouper hiding behind the billboard sign along the highway....ooops! How did we get here?  Then we find there is something very dark hidden on the Earth...or should I say in the Earth.
So, there you have pretty much the basic stuff about my little adventure, um...except for the fact that it has a definite X-Files ending. You know, government cover up and all that good stuff. The kind that screams; sequel!!! Which, by the way is in progress even as we speak.... 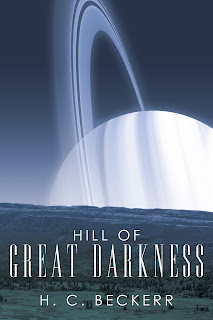 HILL OF GREAT DARKNESS: She was the pinnacle of human engineering looking more like an expensive sports car than a spacecraft. And she was fast!
The spacecraft MAGELLAN was the first of her kind. Built entirely with private funding she was mankind's first real hope of reaching out to the planets of our solar system.
Her first and only mission, was to test a new propulsion system for a simple five second burn to see how far she would go...
Then something went wrong.
This is her story.