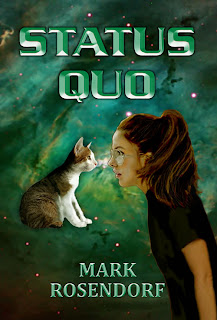 Welcome to Mark Rosendorf, a fellow writer with my publisher, L&L Dreamspell. Mark was born and raised in Queens, New York. He is in his late twenties and has been for the last ten years.

Mark's offering a free copy of his new book, STATUS QUO -- a story filled with suspicion and danger when an inexperienced crew is chosen at the last-minute to travel into space through an alien wormhole!

For those who purchase a copy, part of the proceeds will be donated to the American Cancer Society for breast cancer research through the Bosom Buddies organization. You can preview the first two chapters at www.markrosendorf.com/StatusQuo.html or go to www.markrosendorf.com and then click on the Status Quo icon.

Mark Rosendorf’s lifelong dream of becoming a published author came true in January, 2009, with the release of The Rasner Effect, a psychological thriller that has taken its readers by storm. Mark has since published two sequels, Without Hesitation and Rasner’s Revenge. His work is also featured in two anthologies, Cats in a Dreamspell and Killer Recipes.

Mark draws his inspiration from a wild (and sometimes psychotic) imagination, as well as his experience as a school guidance counselor working with special needs students in the New York City Department of Education. He holds a Masters of Science in Human Development and Leadership from Long Island University in Brooklyn, New York.

What do you think readers will like about your book? With all my previous books, The Rasner Effect series, readers related to the characters and enjoyed the twists and turns. Status Quo is a different genre but both aspects are in prevalent here as well. Alex Copeland is the type of average guy who everyone would want as a neighbor. He has an overbearing sense of responsibility and a guilt complex for everything but the rain. Other characters such as Ernst Reed, Sara Maxwell and especially Gilda Marin are just like us except for a run of bad luck and bad breaks. Readers will feel like they are sitting on the ship and headed through a wormhole to another planet along with the Status Quo crew. I can also promise their adventure won’t end the way you will expect.


The Writers’ Lens is about "Bringing fiction into focus." What brings your writing into focus-- the characters, the stories, the love of words? A story idea can hit me at any time, but it usually comes around 3 am in the morning. I suddenly get inspired, either by a dream, a concept or an idea and I start taking notes on plot, characters and specific scenes. Unfortunately, these ideas that evolve into stories hit like lightning: one huge blast, then it’s gone. That is why I keep notepads and pens everywhere, next to my bed, in the car and even on the wall outside my shower.

Status Quo started when a question popped into my head: If there was proof of lfe on another planet, would the world’s leaders tell us or do whatever it takes to keep us in the dark? This is the story of the seven individuals who are dragged into a conspiracy to keep the public from finding out that we have neighbors in the stars.

What's your favorite way to interact with fans/readers? There is nothing I like more than receiving e-mail or facebook comments from readers. Whether those comments are positive (what a great story) or negative (you suck, don’t quit your day job) I appreciate the feedback and the time someone takes to both read and comment on my work.

Is there a different genre or type of book you’d love to try to write? Yes, and I’m happy to say it’s happened. After having success with suspense/thrillers such as The Rasner Effect series, I really wanted to try my hand at science fiction. Since my reading of choice is science fiction, I always promised myself that if I could come up with a fairly original sci-fi premise that I was sure people would enjoy, I’d write it. Status Quo is that fantasy come true.

STATUS QUO: College student Alexander Copeland worked as an assistant for astronomer Gordon Maxwell. Alex was offered the opportunity of a lifetime – to join a small civilian crew and travel to outer space to investigate a mysterious wormhole presumed to have been created by an alien species. But the top-secret government division sponsoring Dr. Maxwell’s research abruptly canceled the expedition and closed down the entire project.

Seven years later, twenty-five-year-old Alex, working as a New York inner-city junior high school science teacher, is contacted by the same arrogant government project director who tells him the original space expedition has been revived. Alex is offered a seat on an advanced space shuttle christened Status Quo, set to go through the wormhole. But Alex is immediately suspicious. After seven years, why is the project suddenly on again?

Alex’s new shipmates only add to his anxiety. Sara Maxwell, gifted daughter of the late Dr. Maxwell, has spent the last seven years in a mental institution. The ship’s pilot is a teenage boy whose only flight experience is on a simulator. The pilot’s mother, also chosen as a crewmember, is supposedly psychic. The ship’s doctor is a novice who wants nothing to do with the mission. A troubled teenage girl on the brink of suicide is also accepted as part of the crew. There’s even a convicted murderer and a cat aboard. Absolutely no one chosen for this mission has any sort of astronaut training or experience. And worst of all, the project director’s agenda appears to be making sure that the ship and all aboard never return to Earth.

It’s a conspiracy that leaves these lost souls stranded in a strange galaxy with a damaged ship surrounded by threats both human and alien. Even if this group worked together and managed to survive, could they – would they – return to the uncaring world that sent them to space to die? With the alternative looking exceedingly grim, the journey of Status Quo seems doomed. Or is it?