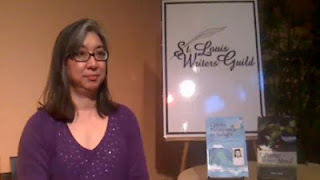 St. Louis Writers Guild has a new feature for its long standing lecture series. The SLWG Author Series is a monthly interview with an author. For almost a decade St. Louis Writers Guild has hosted a lecture series featuring an author discussing their writing process, their books, and the industry. Now, this series is available in multiple formats and reaches a much wider audience.

The SLWG Author Series is viewable in three ways.
1. Be part of the audience
2. SLWG Members can watch and interact live online
3. The edited interview is posted on www.stlwritersguild.net and Youtube.

The SLWG Author Series is held on the third Thursday of every month at All On The Same Page Bookstore, 11052 Olive Blvd in Creve Coeur.
The event starts at 7pm, the interview lasts about 30 minutes, but being part of the audience means you get more interaction with the author. More questions are asked and answered, and there is often a more in-depth conversation about the topic. I invite everyone to come out to the lecture, and best of all it is free! Plus you can buy a copy of the author’s books and get it signed!

Part of paid membership in St. Louis Writers Guild is access to the live online broadcast of the Author Series. A link is sent to every member allowing them to login at 7pm on the third Thursday of the month to watch the unedited interview. Usually some antics precede the interviews and some have suggested we take all those clips and edit them into a comedy movie. Online attendees can ask questions via text or twitter using @stlwritersguild. Those questions are answered during the interview, leading to a very interactive experience for the attendee and the author.

Finally, if you can’t make it to the All On The Same Page Bookstore on the third Thursday of the month or to the online broadcast, a recording of the interview is posted on www.stlwritersguild.net and Youtube within a week of the broadcast. The video is edited; it includes the entire interview, but not the hilarious outtakes.

Topics so far have covered, Memoir, Editing, and Y/A Lit, and future topics will touch on a wide variety of area in the publishing industry. St. Louis Writers Guild invites you to join us on the third Thursday of the month or online, and all we ask is that if you enjoy the speaker consider purchasing their books.

You may have seen the interviews from the 2012 and 2013 Missouri Writers Guild Conferences. They were held in a similar manner using the techniques and technology perfected by St. Louis Writers Guild. The Writers’ Lens has enjoyed partnering with SLWG and MWG to provide these interviews and hope to bring more events and interviews like this in future. 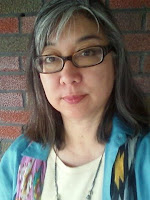 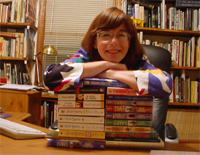 Both interviews have been posted on The Writers’ Lens tumblr page http://writerslens.tumblr.com/

The May 2013 SLWG Author Series Interview with LS Murphy will be posted this week on www.stlwritersguild.net

We hope to see you in June!