The slap-squish click-ity click of brick smashed into mortar and moved against the others to fit it in place was followed by the scraping of the trowel removing the access. The scraping of the goo back on top of the next brick in the wall was accompanied by the clinking of chains and the stifled moans of a helpless man, his mouth duct tapped and his eyes wide as the last smells of the world he would know was the smell of the basement as I slowly walled him up.

"Oh, hello! Please ignore the redecorating I am doing to my little corner of The Writers' Lens. "

"Who is this man?" Your voice trembles.

"Nothing to worry about. He's my inner critic, just suffering from a bout of . . .  talking too much while I write."

Please do ignore the mess I am making as I prepare to launch a new series of blogs about a man, who has rightly been crowned the Master of Suspense, Alfred Hitchcock and what it means to be Hitchcockian. His name is synonymous with thrillers and mystery--and macabre humor (like the above ala Hitchcock Presents). His films spanned horror, suspense, romance and comedy, while he explored the dark side of our psyche. 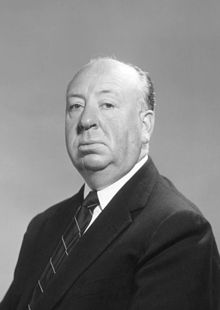 Alfred Hitchcock was a master of storytelling with the art of film. This series of blogs, which will be held over the next several months, will take the master's film techniques and see how they can be applied to our shared art of writing (even if you don't write mystery, suspense, or horror).
While preparing for this series, I have seen some posted articles and comments that too much has been read into what Hitchcock--reading meaning into something that had no meaning. I couldn't disagree more. Hitchcock controlled his films too much, not giving the film editors much of a choice when it came to cutting shots or the choice of the camera view.  In fact, to quote him, "The writer and I plan out the entire script down to the smallest detail, and when we're finished all that's left to do is to shoot the film."

Over the next several months, as we rotate blogs on the Writer's Wednesday, I will explore the following Hitchcock techniques and touch on some writers who use them (intentionally or not):
The Writers' Lens would like our readers to comment often and have a hand in the exploration of the Hitchcockian style and how it might help in all of our writing. For those who read this blog who are not writers, it is our hope to bring into focus how Hitchcock's techniques are used today in what you read and watch on TV or in the movies.

Thank you for reading and please visit www.davidalanlucas.com and www.thewriterslens.com. You can also follow me on twitter @Owlkenpowriter and the Writer’s Lens @TheWritersLens. Fiction is the world where the philosopher is the most free in our society to explore the human condition as he chooses.
Posted by Unknown at 6:19 AM