This week, The Writers' Lens is honored to bring its readers a master--a legend--of the thriller and mystery genre: John Lutz.

"If I've scared somebody enough to disturb their sleep--that's good."--John Lutz

The Writers' Lens: When you are starting to work on a new novel, what do you find brings the story into focus for you? A Character? A setting? Something else?

WL: How did you learn to write suspenseful thrillers?

JL: I would like to think they work because of the characters. They have to be real enough for the reader to identify with them and on a certain level feel what they are feeling and share in their experience.

WL: What was the hardest part of writing thrillers and suspense?

JL:  It’s more difficult and time consuming to write a long, multiple viewpoint novel than to write a linear detective novel or conventional whodunit. There are more plates to keep spinning.

WL: You are currently writing about serial killers.  When you write their scenes, do you ever scare yourself?

JL: Nope. I’m too wrapped up in technique, and wondering if what I’m doing is working, to feel what I hope the reader will feel. It’s gratifying to receive e-mails from women thanking me for having scared them. Makes me think I’m on the right track.

WL: How do you sharpen your suspenseful scenes and when do you know, as the writer, that you have it the way you want it?

JL: When I believe I’ve revised enough, I set aside what I’ve written and come back to it later with a fresh perspective. If it still feels to me that I’ve nailed a scene or story, I’m satisfied.

JL: I like my fiction to convey the notion that there are patterns and  real cause and effect in life (which is for the most part  pretty random) and that once we discern what’s happening, we have the ability to cope with it, or at least learn to accept it. 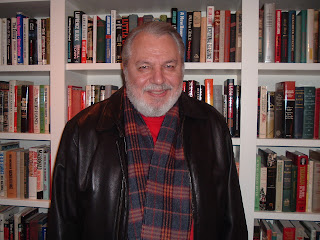 WL: Do you work on multiple novels at once? If so, how many?

JL: I take it one book at a time, though if I’m between phases, such as a finished first draft, or a second, I might work on another project. I’m probably giving the impression that I revise a lot. I do.

JL:  When I received a surprisingly large advance for a novel, it became apparent to me that this was my most marketable skill. I knew I could combine what I very much enjoyed doing (writing) with obtaining what I very much needed (money). A liberating moment.

WL: In years past, new writers would battle their way in the pulp magazines to build their readerships and their careers. Do you think that is still the case in the explosion of electronic readers, blogs, e-zines, and other like media? Who do you see as the current gatekeeper of the good writers and those who are still developing?

JL: A comprehensive answer would take several pages, and then it might be far wrong. Maybe the most interesting thing about book-biz these days is that no one knows for sure where it is headed. Where we’ve been, and where we are, might be much different from where we’re going. There seems to be no gatekeeper, and the gate is wide open.

JL: In a thriller I write from several alternating  points of view. I also like to write more linear PI novels from the protagonist’s POV, and in third person.

WL: What novels, books, articles, magazines or other media most useful when you are researching serial killers and criminal investigation?

JL:  See above. Google is probably my main source of research material.

WL: You are a master and a legend in the genres of suspense and mystery.  What was your biggest fear when you decided to first be published as a novelist?  Do you still have those fears with each new book or are there other fears that come up?

JL: Like most of the writers I knew when I was starting out, my biggest fear was that I wouldn’t sell enough copies to prompt the sale of another book. Fewer fears now. I’m more confident that if I take the time and trouble to revise, I can make whatever it is I’m writing work, Unlike many writers, I really do enjoy revising, so that’s not much of a problem. It’s meticulous work, but it’s what  lends the fiction life.  To paraphrase Mark Twain: “The difference between the adequate word and the precise word is the difference between the lightning bug and the lightning.”

JL: I usually work in the morning, then after lunch revise what I’ve written.  In both morning and afternoon, before starting to work I check e-mail, Facebook, Twitter, to make sure nothing requires immediate attention.

How do you win a free signed copy of this novel?  To enter the contest, simply leave a comment or question on the Writers'Lens blog between now (April 9th) and midnight April 14, 2012. Please include your email so we can reach you if you win. The more comments you leave, the greater your chance of winning the contest. If you refer others to The Writer's Lens who mention your name in their comments, I'll enter your name again in our random number generator along with theirs, also increasing your chances at winning! The winner will be chosen after midnight on Saturday, April 14 and the announcement made on Sunday, April 15, Good luck and comment often. Good luck!

Thank you for reading and please visit www.davidalanlucas.com and www.thewriterslens.com. You can also follow me on twitter @Owlkenpowriter and the Writer’s Lens @TheWritersLens. Fiction is the world where the philosopher is the most free in our society to explore the human condition as he chooses.
Posted by Unknown at 6:56 AM