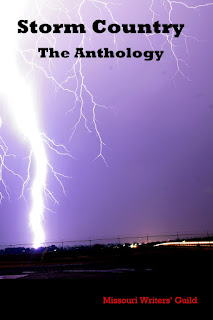 This Monday, The Writers’ Lens is giving away a copy of Storm Country, an anthology assembled by Missouri Writers Guild to help support the recovery effort in Joplin, Missouri.

Last year, Joplin was devastated by a tornado that destroyed most of their schools. It took out a large section of the city too, but the schools lost almost everything. So Missouri Writers Guild sprang into action and put out the call for books. They collected thousands of books and school materials and transported them to Joplin. Deborah Marshall, President of Missouri Writers Guild put out the call for submissions. They created an anthology and donated the proceeds to the Joplin Schools.

Write Time! Write Place! Write Now! the MWG’s Annual Conference is April 20-22, and I’ll be spotlighting the conference and Missouri Writers Guild as the week continues – so stayed tuned for some very exciting announcements.

To enter, simply leave a comment or question on this post or any of the posts this week on The Writers’ Lens. You have until midnight March 21st, 2012 to enter. Please include your email so we can reach you if you win. The more comments you leave, the greater YOUR chance of winning the contest. The winner will be chosen after midnight on Saturday and the announcement made on Sunday, April 22nd.

One note about the giveaway: Due to shipping limitations, you have to live within the continental United States to win. Apologies to the international readers, we also have giveaways are fully online so anyone can win.

You can still register online, or at the event, for the Missouri Writers Guild’s conference this weekend. Visit http://www.missouriwritersguild.org/ all the information.

Thank you for entering, and be certain to check back on Wednesday for some exciting news about a collaboration between St. Louis Writers Guild, Missouri Writers Guild, and The Writers’ Lens!
Posted by Brad R. Cook at 6:50 PM