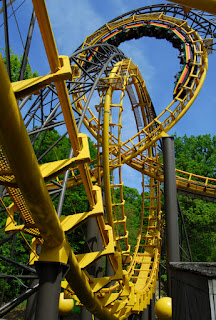 Writing is a roller coaster ride. If I ever questioned that, this weekend dispelled any doubts when I attended the Missouri Writers' Guild (MWG) conference. During 24 hours, I experienced the peaks and valleys of the ride as I went from a book signing to slushpile readings to nightcap meetings to pitch sessions.

As I quickly learned after my debut book ZERO TIME came out last October, book signings can leave you thrilled from lots of sales or chilled from thinking no one wants your book. To get a thrill from signing when you don't sell much, it helps to have your expectations in alignment. For me, selling two books was an unexpected pleasure at a writers' conference where everyone is hawking their own books. It added to the fun of having "arrived" at the point in my career of actually having a book to sell. I also enjoyed getting to chat with others and learning more about their work. (I celebrated by treating myself to a couple of books.)

In the slushpile readings, MWG president Deb Marshall read from the first page of works attendees submitted to a panel of agents and editors (and an audience of conference goers). The agents/editors were asked to explain how they would react if the story appeared in their slushpile. Each raised her hand at the point she would've quit reading. When a majority had "quit," they discussed why. A similar scenario occurred in one of the breakout sessions with emedia and writing guru Jane Friedman, where I got feedback on the first page of my YA fantasy's (soon-to-be-gone) prologue. Only a few of the submissions in either of these readings made it very far, and mine didn't get past the first sentence. (Sigh.) My roller coaster went into a big dip.

Why? In my case, I tried to provide too much information too soon, and strange names made it even more confusing: "The Elders' warning echoed in One Reed's mind as the girl entered the museum's Music Room: Respect your body's wisdom."

Some other common problems with first pages included: over explaining, too much detail, interior monologue, flashbacks, a crisis without a unique hook, dialogue without context, info dump, character dump (have less than four), back story, and too many adverbs/adjectives.

The first night ended with a nightcap session--you could visit informally with the presenters, who held court in casual groupings in the hotel's hallways and lounges. Many had only one or two people in their group, but Curtis Brown agent Sarah LaPolla's query critique group blocked the hallway near the front desk. I only attended part of that crowded session, but saw the writers' reactions run the gamut. Some had peaks--afterward, one of the participants said his query got the agent's interest and set him up for a successful pitch session the next day--but many had dips.

The question is, what do you do with those dips? I think another of the conference attendees has the right idea. In a post-conference Facebook post, he said: "...a huge thank you to one person for a carrot and another for the swift kick in my A$$ that I needed right now." I find that sometimes we need to get kicked out of our comfort zones if we're going to move forward. After all, one definition of insanity is doing the same thing over and over and expecting different results.

On Saturday, the agents and editors spent a grueling day with pitch sessions timed seven minutes apart. As writers lined up outside the pitch room, waiting our turn, we got a running report from those who went before us. Many looked shell-shocked as they came out--some from actually getting a request and others from getting a rejection. Luckily, I had pitch sessions with two agents, and experienced both the valley of rejection and the peak of gaining an agent's interest.

I pitched my YA fantasy novel, which the first agent believed had too much adult involvement. She didn't want a few chapters or even a query--she was simply not interested. After a couple of hours, I finally "heard" what she said. It took me that long to get over the disappointment and realize that I'd pitched it wrong. By trying to condense the language and make it catchy, I'd started with the words "a family vacation" instead of "a 16-year-old girl on a family vacation." Although I tried to explain to explain to her that my teenage protagonist is central to everything that happens, I couldn't overcome that first impression. I switched the emphasis on the second pitch. Perhaps that's what made the difference or it could just be that my story was a better fit for her, but that agent requested the full manuscript. I was at the peak on the roller coaster, waving my hands in the air!

I'd love to hear your experiences on the writing roller coaster! Your comments will also enter you in this week's giveaway contest for an ebook of D.A. Bale's RUNNING INTO THE DARKNESS..

If you'd like to learn more about the MWG conference, check out the Guild's 2012 MWG Conference Notes and Linda Austin's report in the Examiner. Check back here on The Writers' Lens for podcasts and webchats with some of the presenters.

Thank you for reading and please visit me at www.twfendley.com. You can also follow me on Twitter @twfendley.
Posted by T.W. Fendley at 9:59 AM