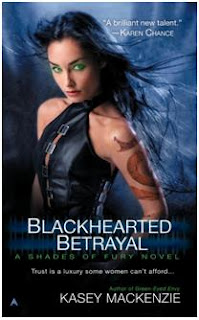 
Riss Holloway is the no nonsense Chef Magical Investigator for the Boston Police department, and she’s a Fury! Now she’s back in the third installment Blackhearted Betrayal by Kasey Mackenzie.


Now that’s a hook – for a great series of books, and for an amazing author who is as quick as her characters.


I had the opportunity to hang out with Kasey at last year’s Archon – a great Sci-fi Convention held every October in Collinsville IL – over a love of the written word and deeply immersed in the genre, we talked with several other authors over the weekend. Kasey was speaking at the convention and was one of the ones making more sense than the others. She was kind enough to give me a copy of Green-Eyed Envy, her latest book (at that time) and teased me with tantalizing clues to the next book that was brewing her mind. If her editor is reading this I swear she said she had it all written by then…really…


I had never read The Shades of Fury Series before meeting Kasey – she’s like that, if you have the chance to meet her, you’ll want to read her stuff too. Plus the premise intrigued me – a tough cop fighting the arcane menace on the streets of Boston and she was a Fury – it reminded me of a female Dresden Files, but I found it was much more than that. I read Green-Eyed Envy, the second book in the series, yes I’m a rebel like that and will read book two before book one. It just means that after I do read book one, I will go back and get all the inside jokes I wondered about when reading book two the first time. Besides…


Did I mention she had me at Furies…


For those who are wondering, and so you don’t have to Google it, Furies are the Greek and Roman deities of vengeance. Simply put – they are awesome, and Kasey captured that vengeful spirit in an almost noir kind of a world. Her books are like gritty crime novels wrapped up in a wonderful world of myth and the supernatural.


Snatch up this series, you won’t be sorry. Riss is one tough… Fury!


Blackhearted Betrayal, has Riss leaving Boston and entering into a civil war back home, but I’ll let Kasey tell you about that one…


The third novel in the urban fantasy series, Shades of Fury, for Penguin/Ace Books.


Trust is a luxury some women can’t afford…


As a Fury, Riss Holloway belongs to an arcane race that has meted out justice since time immemorial. As Boston’s Chief Magical Investigator, she’s responsible for solving any crimes committed by or against supernaturals. But now that she’s going home, Riss has no idea just how dangerous–and personal–the crimes have become.


Riss Holloway has taken a leave of absence from her mortal job as Chief Magical Investigator for the Boston PD. Right now she’s determined to focus on her Fury duties: like assisting her mother with an unsettling friction brewing in the Sisterhood–a faction of Furies sworn to serve all the Deities equally. Until now.


Someone is playing favorites. As a result Riss is ushered into a tumultuous civil war–and not one just tearing apart the Sisterhood, but one embroiling every god and goddess into the chaos as well. What was once a precept, to stand as a united whole policing arcanekind for millennia, has been divided by something Riss never imagined–and choosing sides could be the most dangerous move she’s ever made. 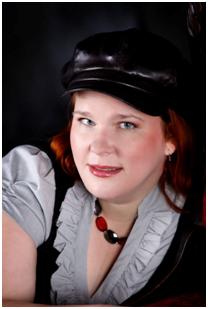 When Blackhearted Betrayal hit the shelves I sat down again with Kasey,


What was your inspiration for the Shades of Fury Series?


I’ve always been a huge mythology buff, one of the reasons I fell in love with urban fantasy before it actually became a defined genre.  I wrote fiction constantly over the years, ever since I was a child, but it took awhile for me to become focused enough to seek publication.  When I finally started getting serious about getting published, urban fantasy had just become a powerhouse genre.  One of those cases of right place at the right time.  At that point, most of the fiction had to do with vampires, werewolves, or the Sidhe/Fey—all creatures I love to read about, but I wanted to set my own UF apart from others as much as I could.  I entered a query-writing contest with an off-the-cuff query written blurbing a book I never wrote, featuring my main character’s niece, Cori.  Furies were something I hadn’t seen handled much in fiction, and they seemed like they would just be an extremely natural fit in urban fantasy.  I actually progressed a couple of rounds in that contest and got great feedback, so I tried to write the first few chapters of that book and realized I cared much more about the story of how Cori’s paternal aunt disappeared, and how her maternal aunt solved that presumed murder.  And voila!  Shades of Fury was born.


How cool that you queried a book before writing it, that’s something Riss might try.


What traits do you most love about Riss Holloway, your main character?


I love that she’s strong and self-assured, but willing to admit when she’s wrong and try to learn from her mistakes.  I absolutely love that she’s always seeking to do what’s right, while at the same time protecting those she loves as much as she can.  Of course, she’s also learning that you can’t protect other people by controlling their lives or decisions for them.


If you could meet one of your characters, who would it be and where would you meet?


I’d probably want to meet my main character, Riss Holloway, just to see if she’s the same in person as I have envisioned her.  We’d meet in Boston at a Starbucks so she could get a dose of caffeine before we decided somewhere else to go to eat.  Furies are big eaters due to the whole insanely-fast metabolism thing.


What's your favorite way to interact with fans/readers?


I love meeting with them in person most of all, though that happens rarely.  I also enjoy interacting with them online, especially via Twitter and Facebook.  Chats are fun, too, though I’ve only participated in a couple of those as an official published author.


By the way, you can find Kasey on twitter @KaseyMackenzie http://twitter.com/#!/kaseymackenzie


Which authors inspired you, and how have they influenced your style?


In my own genre, I’d say that Laurell K. Hamilton, Jim Butcher, Kim Harrison, and Kelley Armstrong were my first major inspirations as I started finding my own voice and style in urban fantasy.  Of course, I also have to give a nod to precursors like Emma Bull who wrote War for the Oaks and Mercedes Lackey whose Diana Tregarde series initially kicked off my love for modern urban fantasy.  Even earlier than that, though, I fell in love with the Narnia books by C.S. Lewis and most especially The Dark is Rising Sequence by Susan Cooper.  Nowadays, I’ve added more urban fantasy authors that I love to my list, but those first four were the ones I originally “stumbled” upon and fell in love with as I was developing my own way in the genre.  As far as how they influenced my style, basically reading their books gave me the courage to strike out on my own and find my way.  I didn’t try to actively emulate any of them, I just read voraciously and wrote voraciously and discovered my own voice and stories through the process.


I agree, even though I made the earlier comparison, you do have your own voice, a quick-witted rapid style that races through the scene. But now a few questions for the writers out there.


What's your writing style--do you work from an outline or wait to see where the characters lead you?


Since I write mostly urban fantasy, fantasy, and some science fiction, I do basic world-building like how the world works, figure out minor political or societal/historical issues, and character sketches at the start.  I will typically write a few paragraphs of plot summary for what is going to happen (ideally).  At that point I just dive in and write, write, write—and often through my plot summary plans out the window as I discover the characters and world more in-depth.  I consider myself more of a “pantzer” who writes by the seat of her pants than a “plotter.”


Which line did you struggle with more, the first or the last?


The first line and last line of any book typically come fairly easily for me – I struggle way more with all the stuff in the middle!


How many drafts did you complete of your last book before submitting it to an editor/agent?


These days I typically only write 2-3 drafts of a book before an editor sees it.  One fairly clean draft, one major edit pass-through, and then one minor pass-through after I get feedback from readers whom I trust.  The last book was honestly so far behind schedule due to real-life events that I honestly only did 1.5 drafts of the book before my editor saw it.  Fortunately I DO write fairly clean draft so it wasn’t in too horrible of shape.  Equally fortunately, my editor is awesome at helping me improve upon those things I am too close to a story to see need to be tweaked in order to work better.  J


Yes, Editors are wonderful people – we love them, we need them, and secretly dread their revision emails.


What do you find is your most effective marketing tool, social media, reviews, blog tours, word-of-mouth, or one I haven’t mentioned?


I think that all of those are crucial and work together to make a marketing whole, but if I had to pick one I’d probably choose world-of-mouth.  I don’t think that ANYTHING can serve to successfully promote a book like good, old-fashioned word-of-mouth buzz for a book.  It’s really what leads to those crazy big successes most of us wish we could duplicate!


Here at The Writers’ Lens our motto is Bringing Fiction in Focus, so: What brings your writing into focus, the characters, the stories, or the love of crafting words?


Wow.  I’d say all three but that may sound like a cop-out answer.


Nope, that makes sense to me, but…


I’d say if I HAD to pick one, it would be the characters.  They’re truly what drive a story for me the most.  I want to find out what makes them tick, put them into tough situations, and see how they can manage to come out on top.  Probably one of the main reasons I love my protagonist, Riss Holloway, so much.  She’s kind of like me when it comes to a basic outlook on life:  We can’t control what happens to us, but we can control how we react.  And we’re both always going to fight, fight, fight for what we believe in! 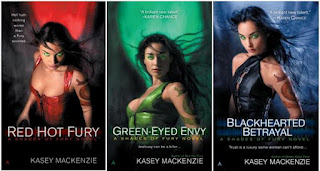 Thanks Kasey! May I recommend that everyone run out and snatch up Blackhearted Betrayal before one of the furies tracks you down and brings the punishment of almighty vengeance… or you could check back on Monday to see what The Writers’ Lens will be giving away… hmmm… I wonder, could it be… you’ll just have to check back and find out.


You can find out more about Red Hot Fury, Green-Eyed Envy, or Blackhearted Betrayal at www.kaseymackenzie.com .


Brad R. Cook is a historical fantasy writer and President of St. Louis Writers Guild. Please visit www.bradrcook.com or follow me on Twitter @bradrcook
Posted by Brad R. Cook at 10:36 AM