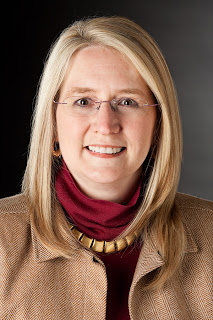 Welcome to Gail Z. Martin, author of The Fallen Kings Cycle series (The Sworn and The Dread), as she unveils her sneak peek of ICE FORGED, Book One in The Ascendant Kingdoms Saga, coming from Orbit Books in 2013.

Gail’s giving everyone a first look at the cover art for ICE FORGED, as well as book excerpts, author Q&A and more as part of her Hawthorn Moon Online Sneak Peek Event.  She’s got exclusive goodies spread out across more than a dozen partner sites, and you can find out about it all on Gail’s site, www.AscendantKingdoms.com.

She hosts the Ghost in the Machine Fantasy Podcast , and you can find her on Facebook, GoodReads, BookMarketing.ning, Shelfari and Twitter @GailZMartin. She blogs at www.DisquietingVisions.com.

Here’s what we asked Gail….

What’s your Hawthorn Moon Sneak Peek Event all about? I started doing it back in 2008, and it’s become something my readers have come to expect.  The solstice (aka the Hawthorn Moon) was an important event in my first book, The Summoner, and the name and timing just stuck.  It’s my online unveiling of the cover art for the new book, along with excerpts, interviews, all-new guest blog posts and lots of fun stuff spread out over a dozen or so sites.  To find out all the goodies and all the partner sites, please visit www.AscendantKingdoms.com.

What inspired your latest book? Books for me always begin with a ‘what if?’ So I started with….what if….Europe’s prison colonies had been in the far north instead of the south?  What if…you had a lord who was banished for an ‘honorable’ crime, for which he felt no remorse?  And what if… during his exile, there was a cataclysm that wiped away the old regime, wiped away everything, and that disgraced lord was the only one who might be able to put it right?  What if….there were powerful forces that wanted to stop that from happening?  What if… a group of former convicts were the only hope the world had?

What do you think readers will like about your book? I always try to give my readers a good rollercoaster ride, so there’s plenty of action, suspense, even a little horror mixed in with the fantasy.  It’s also important to me for my characters to grow and change over the course of the series, so they’ll learn things about themselves they never realized, find out just how far they’re willing to go for what they want.  I think I’ve created an intriguing cast of characters, and I hope you’ll be interested to get to know them better, become invested in their choices and what happens to them.  I also try to show you a world that makes you want to explore it, to discover its secrets.  I write the kind of book I like to read.

How do you find time to write and do a demanding job? I’ve always wanted to write.  I actually got my MBA so I could afford my writing habit!  Before my books were published, I wrote every time there was a free moment, usually at night after the kids went to bed, or early on Saturday mornings before everyone else got up.  Now, I write a couple of days a week, and do my speaking and client work in the remaining days.  If you have a story burning to be told, you’ll find a way to get it onto paper!

Would you share a bit about your next project? My next project is another book in The Ascendant Kingdoms Saga, REIGN OF ASHES.  It will take you deeper into my world, help you get to know the characters better, and present a whole new array of dangerous challenges!


The Writers’ Lens is about "Bringing fiction into focus." What brings your writing into focus-- the characters, the stories, the love of words? I think for me, it’s the characters.  I love my characters, so it’s exciting for me to tell stories about them and share their lives with readers.  I enjoy helping my readers get to know my characters better and better as the series goes on, with the hope that the characters become people you feel you know, friends you don’t want to see end their visit.

ICE FORGED, Book One in Gail’s brand new Ascendant Kingdoms Saga, will be available in stores and online world-wide in January 2013.
Condemned as a murderer for killing the man who dishonored his sister, Blaine “Mick” McFadden has spent the last six years in Velant, a penal colony in the frigid northern wastelands of Edgeland. Harsh military discipline and the oppressive magic of the governor’s mages keep a fragile peace as colonists struggle against a hostile environment. But the supply ships from Dondareth have stopped coming, boding ill for the kingdom that banished the colonists.
Now, McFadden and the people of Velant decide their fate. They can remain in their icy prison, removed from the devastation of the outside world, but facing a subsistence-level existence, or they can return to the ruins of the kingdom that they once called home. Either way, destruction lies ahead…

Gail is also author of The Chronicles of The Necromancer series (The Summoner, The Blood King, Dark Haven and Dark Lady’s Chosen ) from Solaris Books and The Fallen Kings Cycle from Orbit Books (Book One: The Sworn and Book Two: The Dread). Her short fiction has been featured in four anthologies: Rum and Runestones and Spells and Swashbucklers from Dragon Moon Press, The Bitten Word from New Con Press (UK) and the upcoming Women’s Mammoth Book of Ghost Stores (UK).

You can find Gail’s books in bookstores worldwide, as well as on Amazon.com, BarnesandNoble.com, Indigo.ca, Waterstones.com and everywhere books are sold.