Interview with Steve Wiegenstein & giveaway of SLANT OF LIGHT 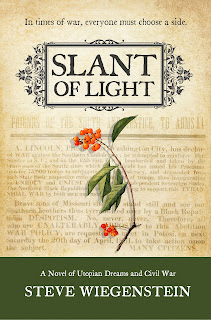 With the nation moving toward Civil War, James Turner, a charming, impulsive writer and lecturer, Charlotte, his down-to-earth bride, and Adam Cabot, an idealistic  Harvard-educated abolitionist, are drawn together in a social experiment deep in the Missouri Ozarks. Inspired by utopian dreams of building a new society, Turner is given a tract of land to found the community of Daybreak. But not everyone involved in the project is a willing partner and being the leader of a farming community out in the middle of nowhere isn’t exactly the life Turner envisioned. Charlotte, confronted with the hardships of rural life, must mature in a hurry to deal with the challenges of building the community while facing her husband’s betrayals and her growing attraction to Cabot. In turn, Cabot struggles to reconcile his need to leave Daybreak to join the fight against slavery and his desire to stay near the woman he loves. As the war draws ever closer, the utopians try to remain neutral and friendly to all, but soon find neutrality is not an option. In the wake of a deadly bushwhacking, Turner discovers that he too has the capacity for ferocious violence. When war finally breaks out, Missouri descends into its uniquely savage brand of conflict in which guerrilla bands terrorize the countryside while Federal troops control the cities, and in which neither side offers or expects quarter. Ultimately, each member of Daybreak must take a stand—both in their political and personal lives.

HOW DO YOU WIN A FREE COPY OF SLANT OF LIGHT?  To enter the contest, simply leave a comment or question on the Writers' Lens blog between now (June 4) and midnight June 9, 2012. Please include your email so we can reach you if you win. The more comments you leave, the greater your chance of winning the contest. If you refer others to The Writer's Lens who mention your name in their comments, I'll enter your name again in our random number generator along with theirs, also increasing your chances at winning! The winner will be chosen after midnight on Saturday, June 9, and the announcement made on Sunday, June 10. Good luck and comment often. 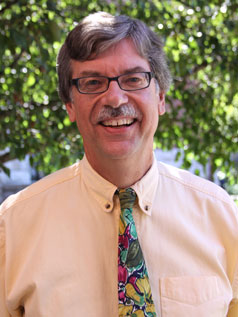 I had the pleasure of spending some time with Steve Wiegenstein at April's Missouri Writers' Guild conference. Congrats to you, Steve, not only on your debut novel but your role as MWG new president! Tell us a little about yourself: I am an academic scholar of utopian movements, a published fiction writer, and a fifth-generation native of the Ozarks. During the late 1970s and early 1980s, I published Ozark Review, a literary journal, while working as a newspaper reporter. Before writing this book, I wrote a considerable amount of short fiction, which has been published in Southern Humanities Review, Louisiana Literature, Nebraska Review, Oxford Magazine, and others. I am also a dedicated promoter of writing in Missouri, currently serving as president of the Missouri Writers’ Guild. Slant of Light's first chapter was the winner of the "Novels – First Chapter" category in the Green River Writers 2008 competition and was a semifinalist in the William Van Wert Fiction Competition. It was published in April 2012 by Blank Slate Press of St. Louis.

The Writers’ Lens is about "Bringing fiction into focus." What brings your writing into focus-- the characters, the stories, the love of words? For me, what brought this book into focus is the landscape. As a native of southern Missouri, I have that landscape embedded in my bones. There is an ancient, elemental quality to the Ozarks that I just love: rocks, rivers, hills, trees. The landscape serves as a reminder of how ephemeral we all are, and how our individual stories and tribulations are always woven into a much larger fabric of time. And yet at the same time we act on the landscape, we alter it, and we leave our mark.

Would you share a bit about your next project? I'm working on the second book of what I'm calling the "Daybreak series"--after the name of the community. In this book, we start in 1865, with the return of the surviving men from the war and the introduction of a raft of new characters. Of course, the women have been in charge of the community for several years by this time, and managing to hold it together on their own, so the return of the men brings a new set of challenges. And it's a different time--the beginning of the industrial age in America--a time when the gospel of individual wealth was on the rise, and Romantic notions of communal living and harmony with nature were on the decline. In Missouri, the war was still being fought in displaced ways--we had the Radical constitution that sought to put an end to any influence by Southern sympathizers in postwar life, and on the other side we had Southern soldiers and guerrillas who refused to accept defeat and went into banditry or the formation of organized terror groups. So it was a fascinating time in a whole lot of new ways.

How much fact is in your fiction? There's quite a bit, but I'm not ashamed to admit that I manipulate fact a lot of the time as well. For example, Sam Hildebrand is a significant figure in my novel. He was a notorious bushwhacker during the Civil War, and in fact one of his first victims was an ancestor of mine named George Canisius. But I put Sam into some places and situations that have no basis in the historical record because I needed him there for dramatic purposes. If you want the real historical record, you can always look at The Autobiography of Samuel S. Hildebrand  as it was marvelously edited by Kirby Ross and Daniel Sutherland. Now for more well-known people and events, I was more careful. No vampire-hunting for Abraham Lincoln in this book, sorry.

What's your favorite way to interact with fans/readers? Face to face, absolutely. I enjoy blogging and e-mailing, but there is nothing more fun than talking to a group or an individual. After my last couple of events, my throat was so dry I could hardly swallow, but I was happy.

What's the highest compliment someone could make about your writing? That's a toughie. I was about to say, "I couldn't put it down," which is something I've heard a few times lately, and that always gives me a thrill. But in terms of motivation, probably the best thing I've heard is "So what happens next?" That is a great compliment, because it means that the readers are so involved with the characters that they don't want the story to end.

Thanks for joining us, Steve. This is T.W. Fendley. You can also find me at www.twfendley.com and on Twitter @twfendley.
Posted by T.W. Fendley at 6:00 AM