Murder at the No Tell Motel--an Interview with Claire Applewhite and Giving Away St. Louis Hustle 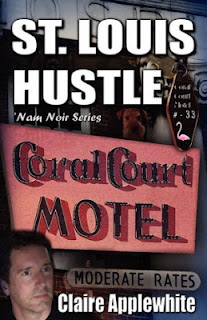 This week's giveaway is a Nam Noir novel set at the old St. Louis "No Tell Motel" Coral Court. Yes, we are giving away Claire Applewhite's St. Louis Hustle.

"A simple case turns into a web of lethal deception.

"When sleek Emily Davies begs Elvin Suggs to trail her philandering husband, Nick, it seems like an easy request. Dimond "Di" Redding and Elvin are eager to get started on the first case for their new business, Grapevine Investigations. Along with help from their fellow Vietnam vet Cobra Glynes, they follow the cheating husband straight to St. Louis' notorious "no tell motel"-The Coral Court.
"Right from the start Di distrusts Emily, a nurse at People's Hospital. She can't explain why she's uneasy until they spot the woman playing doctor with a plastic surgeon at the very same motel.
The mousy desk clerk Waldo E. knows his "regulars" but he refuses to divulge his secrets to the investigators. When one of his regular guests turns up dead, he still won't talk, not even to police detective Reggie Combs. The woman's sleazy landlord is quick to point the finger at Emily's cheating husband.
"After another body turns up, this time at the Coral Court Motel, Elvin and Di discover there's no escape until they see this twisted case through to the bitter end..."

Legend John Lutz wrote: "Author Applewhite has created an engrossing tale that presents the setting almost as one of the cast of characters. If you like neatly rendered, nicely plotted fiction, you'll finish St. Louis Hustle in one sitting. For those who know little or nothing about St. Louis, Applewhite's novel is the perfect gateway to the Gateway City."

How do you win a free copy of this book?  To enter the contest, simply leave a comment or question on the Writers' Lens blog between now (June 11) and midnight June 16, 2012. Please include your email so we can reach you if you win. The more comments you leave, the greater your chance of winning the contest. If you refer others to The Writer's Lens who mention your name in their comments, I'll enter your name again in our random number generator along with theirs, also increasing your chances at winning! The winner will be chosen after midnight on Saturday, June 16 and the announcement made on Sunday, June 17. Good luck and comment often.

I had the pleasure to have a conversation with Claire about her writing and why she writes Noir.

The Writers' Lens: You are a very soft spoken and kind person. What has drawn you to write about one of the most heinous acts that man commit--murder? 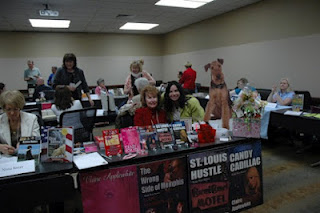 Claire Applewhite: I am intrigued by what would motivate someone to commit such a heinous act.

WL: You have a series of books that are set in St. Louis, Missouri that have been classified as 'Nam Noir. What is 'Nam Noir?

CA: Noir is a subgenre of mystery fiction. Themes such as isolation and disillusionment, and motives such as jealousy, greed and lust, as well as resilience in the face of adversity, all define the noir tradition.  The series set in St. Louis centers on three Vietnam veterans, and the events in their lives before and after their reunion, twenty years later. Because the themes of noir influenced the lives of the ‘Nam veterans, the series was classified as ‘Nam Noir.

CA: I plot from the POV of the character with the most at stake; that is, the one with the most to lose. This character is usually involved with the other major characters, and has a reason to care deeply about attainment of personal goals and desires, and perhaps, the achievements of other characters.

WL: When you are starting to work on a novel, what do you find brings the story into focus for you? A Character? A setting? Something else?

CA: In other words, how do I plan a project? I write the first page and last page first.  Then, I decide what would be the climax or middle of the plot and write a page for a central chapter. Remember, the middle cannot sag! From there, using index cards, I decide what plot points occur between the beginning, middle and end, and fill in the chapters in between. I have heard this method called “storyboarding”, a  film making technique, but I find it to be an effective plotting device.

WL: What brings your writing into focus?

CA: When a major character is put into  a crisis, or an unusually stressful situation, and I am forced to feel with that character, that is, endure the stress and survive, the story becomes more clearly focused for me.  Firsthand, I feel the character’s strengths and weaknesses, and experience the level of resilience.  Many times, a stressful situation will also illustrate the quality of a plot point, that is, the effectiveness in the execution of a key scene.  In this way, a potential wrinkle or snag in the plot may be highlighted.

WL: What drives your novels: Theme, Character, Plot, the Mystery?

CA: What drives the novel are the needs/desires/goals of the protagonist/antagonist. Their story arcs, each necessitating a transformation by the end of the story, drive the novel.

WL: Do you work on multiple projects at once? If so, how many?

CA: I complete one manuscript at a time, and let each one sit for at least a month to attain some distance from it. During that 30 day “rest” I start a new project.

CA: I have always written creatively as a hobby, but it was not until I was a little past forty that I came across a short story that I wrote as a senior at St. Louis University entitled, “On Call.” At the time I wrote it, the instructor and other students encouraged me to expand it into a novel---but I didn’t do it.  Almost twenty years later, that story became my first published novel, The Wrong Side of Memphis.  My point is, that I wasn’t ready to expose the feelings in that short story until I felt comfortable doing so—and for me, that meant waiting awhile. For a writer to decide to go for it, I believe, isn’t always a matter of faith or whether it is easy or hard to do the writing.  A writer can do the writing without anxiety, if they are ready. Sometimes, it’s a matter of if or when you’re ready to let go of an issue or expose feelings that have been sitting on an emotional shelf. That’s the tough part.

WL: A lot of marketing falls on to the writer. How do you market your novels? How do you manage to juggle everything you do?

CA: I have to admit that right away, I realized that marketing the novel was going to be just as time consuming and vital as writing it.  I felt a little panicked, and then, decided that this was too important to try and do by myself. My mind was open to consulting when a friend told me that his friend had just been laid off and was looking for work. We met, and though neither of us had much experience in marketing books, we decided to work on a book together.  So, I have a publicist to help with book signings and photography, and a computer specialist to monitor my website. I also got approval to stock my books at Barnes & Noble in the Midwest region and scheduled book signings locally. Kirkus has reviewed my books and I post the reviews on Goodreads and Twitter. I lecture, visit libraries, and serve as a board member for the Midwest Chapter, Mystery Writers of America, and am an Active member, Mystery Writers of America.  However, I had a literary agent tell me recently that nothing is as powerful as “word of mouth” recommendations.

As far as juggling, I do something on the marketing front everyday. It cannot be a sporadic effort, it should be consistent and steady.

CA: Ed McBain, Agatha Christie, Ruth Rendell, Cornell Woolrich. These authors have unique perspectives on the essential elements of a murder mystery: motive, opportunity and means. Rendell and Woolrich in particular, focus on psychological suspense, while Mc Bain and Christie have plots that I find intriguing.

CA: Readers may visit my website at www.claireapplewhite.com,  or view television interviews and book trailers on  YouTube, Claire Applewhite.