...And Now a Word from the Masters, part II 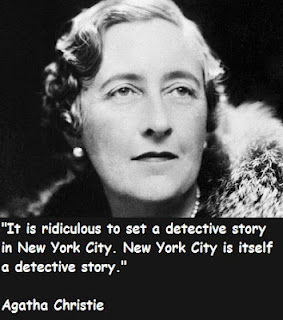 …And Now a Word from the Masters, part II
By Brad R. Cook


A few weeks ago on The Writers’ Lens we featured quotes by some literary masters. But I noticed something destrubing, everywhere I went most of the quotes were from men. In fact, the article only has one quote by a woman. That was not my intention, and given that I know so many amazing female writers, it was hard to believe. So, this week, I thought I'd turn to the ladies, to find out what they said about the craft of writing over the years.


Too often do people only focus on the great literary men, but why, great women have always populated the literary world. Who hasn’t heard of Mary Shelley, Jane Austen, Emily Dickenson, or Agatha Christie, and women have only grown stronger over the years with amazing writers like Nora Ephron, J.K. Rowling, and Maya Angelou.


I still have my Moleskine, only now it has a few more quotes added. I also hope that the people who posts quotes daily to Facebook and Twitter will devote a few to the women writers who have guided us throughout the years.


My point hasn’t changed, we should always look back to those who came before, for they walked this path first. They created the conventions we now follow. These masters saw, contemplated, and worked through the same issues that writers still face today, and luckily when they talked about them, someone sitting nearby wrote it down.


The next time you get stuck, disparaged, worn down by rejection, edits, or that blog you have to write…check in with a master. Google a quote, head to Twitter, or like me, just open your Moleskine and gleam a little wisdom from those writers who already walked our path. Consider them the mentors that so few of us ever find in this industry.


Since I sat down with New York Times bestselling author Angie Fox, a woman worth looking up to, I thought I’d start with a quote from her.


I also asked her for a few of her favorite quotes, and I have to say, some of them are now my favorites.


Discipline allows magic. To be a writer is to be the very best of assassins. You do not sit down and write every day to force the Muse to show up. You get into the habit of writing every day so that when she shows up, you have the maximum chance of catching her, bashing her on the head, and squeezing every last drop out of that bitch. – Lili St. Crow


Cram your head with characters and stories. Abuse your library privileges. Never stop looking at the world, and never stop reading to find out what sense other people have made of it. If people give you a hard time and tell you to get your nose out of a book, tell them you're working. Tell them it's research. Tell them to pipe down and leave you alone. – Jennifer Weiner

Personally, I think so-called "common language" is more interesting and apropos than "proper English"; it's passionate and powerful in ways that "wherefore art thou ass and thy elbow" just isn't. – J.R. Ward

Learn more about Angie Fox, her writing process, and insights to her latest novel Immortally Yours from her interview on The Writers’ Lens. http://www.thewriterslens.com/2012/09/sitting-down-with-immortally-awesome.html


Here are some I enjoy,
Grab the broom of anger and drive off the beast of fear. – Zora Neale Hurston


Some people just don't seem to understand the concept of fiction. It is fiction; it ain't true, folks. – Laurell K. Hamilton

Now, the wisdom of great ladies from yesterday and today, enjoy. I hope that one day they help.


Let other pens dwell on guilt and misery. – Jane Austen


Oh! do not attack me with your watch. A watch is always too fast or too slow. I cannot be dictated to by a watch. – Jane Austen


I'm just going to write because I cannot help it. – Charlotte Bronte


Who has words at the right moment? – Charlotte Bronte


A word is dead when it is said, some say. I say it just begins to live that day. – Emily Dickinson


If I read a book and it makes my whole body so cold no fire can ever warm me, I know that is poetry. – Emily Dickinson


Saying nothing... sometimes says the most. – Emily Dickinson


My dreams were at once more fantastic and agreeable than my writings. – Mary Shelley


What terrified me will terrify others; and I need only describe the spectre which had haunted my midnight pillow. – Mary Shelley
Crime is terribly revealing. Try and vary your methods as you will, your tastes, your habits, your attitude of mind, and your soul is revealed by your actions. – Agatha Christie
It is ridiculous to set a detective story in New York City. New York City is itself a detective story. – Agatha Christie


The best time to plan a book is while you're doing the dishes. – Agatha Christie


I've always believed in writing without a collaborator, because where two people are writing the same book, each believes he gets all the worry and only half the royalties. – Agatha Christie
Evil is not something superhuman, it's something less than human. – Agatha Christie


A good essay must have this permanent quality about it; it must draw its curtain round us, but it must be a curtain that shuts us in not out. – Virginia Woolf


Language is wine upon the lips. – Virginia Woolf


Fiction is like a spider's web, attached ever so slightly perhaps, but still attached to life at all four corners. Often the attachment is scarcely perceptible. – Virginia Woolf
Yet, it is true, poetry is delicious; the best prose is that which is most full of poetry. – Virginia Woolf


Every secret of a writer's soul, every experience of his life, every quality of his mind is written large in his works. – Virginia Woolf


If food is poetry, is not poetry also food? – Joyce Carol Oates
If you are a writer you locate yourself behind a wall of silence and no matter what you are doing, driving a car or walking or doing housework you can still be writing, because you have that space. – Joyce Carol Oates
Life and people are complex. A writer as an artist doesn't have the personality of a politician. We don't see the world that simply. – Joyce Carol Oates


You must do the things you think you cannot do. – Eleanor Roosevelt


There is a thin line that separates laughter and pain, comedy and tragedy, humor and hurt. – Erma Bombeck


It takes a lot of courage to show your dreams to someone else. – Erma Bombeck


I was terrible at straight items. When I wrote obituaries, my mother said the only thing I ever got them to do was die in alphabetical order. – Erma Bombeck
Words mean more than what is set down on paper. It takes the human voice to infuse them with deeper meaning. – Maya Angelou


There is no greater agony than bearing an untold story inside you. – Maya Angelou


Any book that helps a child to form a habit of reading, to make reading one of his deep and continuing needs, is good for him. – Maya Angelou


The idea is to write it so that people hear it and it slides through the brain and goes straight to the heart. – Maya Angelou


Nothing stinks like a pile of unpublished writing. – Sylvia Plath
I try to write parts for women that are as complicated and interesting as women actually are. – Nora Ephron


I don't care who you are. When you sit down to write the first page of your screenplay, in your head, you're also writing your Oscar acceptance speech. – Nora Ephron


Jane Austen is the pinnacle to which all other authors aspire. – J. K. Rowling


I was convinced that the only thing I wanted to do ever - was write novels. – J. K. Rowling


I just write what I wanted to write. I write what amuses me. It's totally for myself. I never in my wildest dreams expected this popularity. – J. K. Rowling
It is impossible to live without failing at something, unless you live so cautiously that you might has well not have lived at all, in which case you have failed by default. – J. K. Rowling


Never be ashamed! There's some who'll hold it against you, but they're not worth bothering with. – J. K. Rowling


Two things I do well in books are sex and violence, but I don't want gratuitous sex or violence. The sex and violence are only as graphic as need be. And never included unless it furthers the plot or character development. – Laurell K. Hamilton
I always treated writing as a profession, never as a hobby. If you don't believe in yourself, no one else will. – Laurell K. Hamilton

First forget inspiration. Habit is more dependable. Habit will sustain you whether you're inspired or not. Habit will help you finish and polish your stories. Inspiration won't. Habit is persistence in practice. – Octavia E. Butler
To write something you have to risk making a fool of yourself. – Anne Rice
That's what writing is all about, after all, making others see what you have put down on the page and believing that it does, or could, exist and you want to go there. – Ann McCaffrey

Nobody who says, ‘I told you so’ has ever been, or will ever be, a hero. – Ursula K Le Guin

So what is your favorite authors’ quote? Let me know in the comments.


Quotes taken from www.brainyquote.com , www.quotegarden.com , and my Moleskine.


Enter to win a copy of Immortally Yours by Angie Fox - http://www.thewriterslens.com/2012/10/an-immortally-yours-giveaway.html
Posted by Brad R. Cook at 5:13 PM