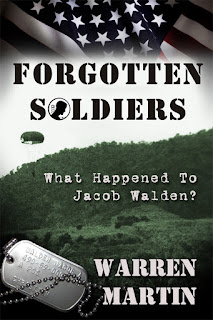 is a Cold War Mystery about an Air Force Captain shot down over Vietnam in 1970 and the untold story of why he never returned home. Forty years later, a journalist investigates what may be the sudden reappearance of the pilot and follows the trail to encounter conspiracy, secrecy, and a secretive and seasoned operative who may have answers to the question about “What Happened to Jacob Walden.”

To enter: comment on this post or any of The Writers’ Lens posts between now and midnight, Saturday, Nov. 3, 2012. Please include your email address so we can reach you if you win.

Paperback and Kindle e-books can be purchased through the Amazon site http://www.amazon.com/dp/B007WMQWGK 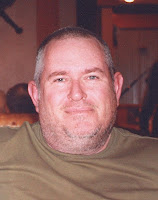 I had the pleasure of meeting Warren Martin recently at 6 North Cafe. His debut novel is “Forgotten Soldiers: What Happened to Jacob Walden,” a Cold War era POW story.  Warren served 21 years in the United States Army, retiring in 1996. He met his wife Debbie shortly after joining the Army in 1975 and they’ve been together ever since. They had three children and while in the Army traveled extensively as a military family to military bases in Kansas, North Carolina, Washington, Okinawa Japan, California, and back again to some of them.  After transitioning out of the Army, Warren worked the next ten plus years for Domino’s Pizza as a Regional Manager in Seattle and Philadelphia and later was a franchisee in Ohio.  He often tells people “I don’t know what I want to do when I grow up and am always looking ahead to the next chapter in life.” Warren completed an MBA from the University of Michigan in 2010 and is currently working on a PhD. in business and leadership. He also pursues writing, research, and participation and support of fraternal, charitable, professional and other organizations.


The Writers’ Lens is about "Bringing fiction into focus." What brings your writing into focus-- the characters, the stories, the love of words? I started writing about five years ago and the initial focus was to tell an entertaining story while also telling a story about what I felt was a forgotten issue. Through writing a fictional account of a characters trek as a prisoner of war, I wanted to bring attention to what I considered a forgotten era and the forgotten POW/MIA’s of Vietnam and the Cold War. The building of characters is important and my current book and future books will focus on the character, but will also have a message that concerns bringing attention to issues of social importance, be it keeping alive the memory of forgotten POW/MIA’s, or other issues.

What do you think readers will like about your book?While the book is a work of fiction spanning almost a forty-year period, the thing that readers will like, and are liking, is that it reads as true story.  I think readers from every generation and those unfamiliar with the Cold War and Vietnam will find interest in the historical aspects in the book while also learning things they didn’t know. The positive feedback from readers also tells me that readers like being drawn into reading the book and enjoy the fact that they find it difficult to put it down. Lastly I think that readers will like learning about the POW/MIA issue, and my hidden agenda and effort to remind people to Never Forget our POW/MIA’s.

How much fact is in your fiction? This is a debatable question. The main character is fictional, but the timeline spanning almost forty years does include actual events like the Son Tay Raid, Hanoi Hilton, the Soviet Union, and other historical and factual events. Readers have already stated they felt it was a true story, and while the main character is fictitious, what happened to Cold War era POW’s and MIA’s was not fiction, and what happened to those who never returned home has been the subject of debate, controversy and conspiracy theories.

Would you share a bit about your next project? The current project I am working I have tentatively titled “Operations Green Light,”  a Cold War action story which takes place in 1989 about a Green Beret A-Team and a C-130 Air Crew that finds themselves behind the Iron Curtain and must figure out a way to get back home, while avoiding starting World War III.  I’m hoping to have it completed and out by next summer.
What's the highest compliment someone could make about your writing? While there are many compliments that can be given, I think I’ve already been given two of the best compliments that someone could receive for writing a fictional book. One is “I couldn’t put it down” and the other is “I thought this was a true story” as well as those who’ve asked if it’s a true story. A film maker and author friend and mentor, Ken Farmer, told me once that the ability to Suspend Disbelief is part of entertaining the reader of books or watcher of films, and feedback has told me I’ve accomplished that.

You can find out more about me at www.twfendley.com.